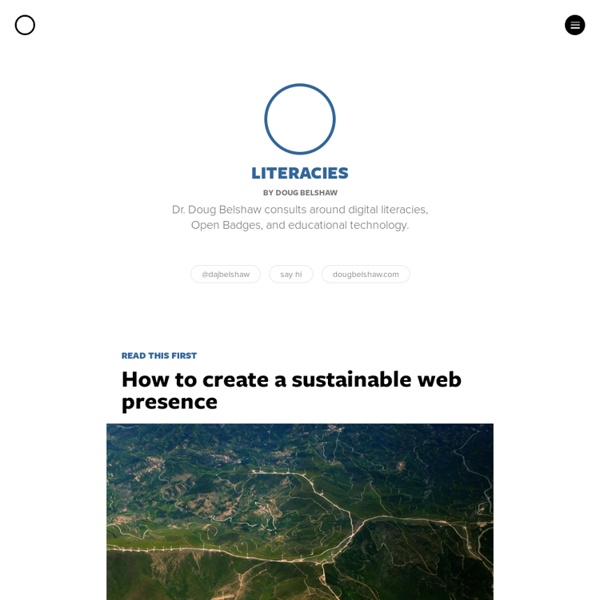 A Domain of One's Own in a Post-Ownership Society 7 min read Maha Bali has written a blog post asking why we talk about “a domain of one’s own” and “reclaim your domain” since people never really own their domains. They merely rent them, she points out. My understanding of ownership is that something belongs to me. That I have already acquired it or been gifted it. It’s a fair point. The “domain of one’s own” isn’t owned; it’s leased, Maha contends. Increasingly, we work for free for major Internet technology companies, on their platforms. Shared in public, none of this is public in terms of ownership, let’s be clear; this is almost entirely private infrastructure. Nonetheless I don’t think that the Domain of One’s Own initiative is mislabeled, as Maha implies in her post. I want to dig a little deeper into both the etymology of the phrase “domain of one’s own,” the meaning of the words “own” and “ownership,” and the legalities and practicalities of the latter in particular in a digital world. To own is to possess. What do you own?

Working openly on the web: a manifesto Three years ago, Jon Udell wrote Seven ways to think like the web. It’s a popular post amongst people who straddle the worlds of education and technology – but hasn’t got the reputation it deserves outside of those circles. That could be because, although a well-structured post, Jon includes some language that’s not used in everyday discourse. It’s perhaps also because he applies it to a specific project he was working on at the time. I’d like to take Jon’s seven points, originally created with a group of people at a conference in 2010, condense them, and try and make them as simple to understand as possible. Services change their privacy settings, close down, and are taken over by megacorps. Also, nobody cares as much about your data as you do. Just as by using a microphone offline we can address a larger group of people than we would be able to with our unamplified voice, so we can address audiences of different scopes in our digital communications. Comments? Kudos

Seven ways to think like the web | Jon Udell Update: For a simpler formulation of the ideas in this essay, see Doug Belshaw’s Working openly on the web: a manifesto. Back in 2000, the patterns, principles, and best practices for building web information systems were mostly anecdotal and folkloric. Roy Fielding’s dissertation on the web’s deep architecture provided a formal definition that we’ve been digesting ever since. Given the web’s hybrid nature, how to can we teach people to make best use of this distributed hypermedia system? Back in October, at the Traction Software users’ conference, I led a discussion on the theme of observable work in which we brainstormed a list of some principles that people apply when they work well together online. 1. In the elmcity context, that means regarding your own website, blog, or online calendar as the authoritative source. Why? To a large and growing extent, your public identity is what the web knows about your ideas, activities, and relationships. Related 2. 3. 4. 5. Too busy to blog? 6.

Computers are replacing foreign language teachers in US high schools — Quartz Rosetta Stone reluctantly took teaching gigs in Maine’s classrooms this year. “We never want to replace someone’s job,” says Franklin Moomaw, the company’s regional director of education in the state. Rosetta Stone’s recommendation was for the program to supplement teacher lessons—it’s used this way in 4,000 schools in the US. The thing is, humans didn’t want the work. People aren’t applying to teach languages, Jay Ketner, world languages specialist for the Maine Department of Education, told the Bangor Daily News. Indeed, a report released in September by the Learning Policy Institute muses that a crisis is looming in American teaching generally, with student demand far outpacing the supply of teachers. Jessica Ward, a high school principal in Somerset County, Maine, told ABC News that she got a single application for an open French language teacher role at Madison Area Memorial High School this year. The timing of this shortage couldn’t be worse.

Metadata Definition Home : Technical Terms : Metadata Definition Metadata describes other data. It provides information about a certain item's content. For example, an image may include metadata that describes how large the picture is, the color depth, the image resolution, when the image was created, and other data. Web pages often include metadata in the form of meta tags. TechTerms - The Tech Terms Computer Dictionary This page contains a technical definiton of Metadata. All definitions on the TechTerms website are written to be technically accurate but also easy to understand. Introduction to Structured Data  |  Search  |  Google Developers Google Search works hard to understand the content of a page. You can help us by providing explicit clues about the meaning of a page to Google by including structured data on the page. Structured data is a standardized format for providing information about a page and classifying the page content; for example, on a recipe page, what are the ingredients, the cooking time and temperature, the calories, and so on. Google uses structured data that it finds on the web to understand the content of the page, as well as to gather information about the web and the world in general. Google Search also uses structured data to enable special search result features and enhancements. Because the structured data labels each individual element of the recipe, users can search for your recipe by ingredient, calorie count, cook time, and so on. Structured data is coded using in-page markup on the page that the information applies to. Structured data format Structured data guidelines

University opens without any teachers By Matt Pickles . A university without any teachers has opened in California this month. It's called 42 - the name taken from the answer to the meaning of life, from the science fiction series The Hitchhiker's Guide to the Galaxy. The US college, a branch of an institution in France with the same name, will train about a thousand students a year in coding and software development by getting them to help each other with projects, then mark one another's work. This might seem like the blind leading the blind - and it's hard to imagine parents at an open day being impressed by a university offering zero contact hours. But since 42 started in Paris in 2013, applications have been hugely oversubscribed. No tuition fees Recent graduates are now working at companies including IBM, Amazon, and Tesla, as well as starting their own firms. 42 was founded by French technology billionaire Xavier Niel, whose backing means there are no tuition fees and accommodation is free. Self-starters Image copyright AP

Ed Tech and the circus of unreason – helenbeetham Update 20 November I’ve been quite overwhelmed by the response to this post. Thank you to everyone who took the time to comment or to contact me via twitter or other channels. The text will be annotated live on 30 November and asynchronously over the following days, thanks to the wonderful people at Marginal Syllabus, whose interest and support has been deeply touching. Clicking on the link will take you to an introduction and instructions on how to participate. I am writing a collective response to some of the comments I have received, but the conversation continues below. Original post I’d been writing a different blog post – in response to Martin Weller’s nice rant about the unenlightenment – but before I could finish it, a deeper darkness had descended. A couple of years ago I convened a symposium on Educational Technology and Crisis with John Traxler, in which we asked the same question about responsibility. Responsibility 1: e-learning must address educational inequalities Like this:

Nottingham academic on casual contract: 'I had more rights as a binman' | UK news The way Greg tells it, it was like a trapdoor swinging open beneath him. One day, he was a promising young academic. The next, his fixed-term contract was up, his wife was ill – and barely any money was coming in to cover the mortgage, to pay for the groceries, to keep the entire show on the road. The trapdoor was wide open; now it would take everything he had not to plunge through it. Greg wanted me to hear his story, but I did not find it easy to sit through. Yet it begins conventionally enough, in the middle of the last decade, with a grant for some more university research about to come through. In a rush to bring in money, he became what one advert describes as an “outdoor cleaning operative” or, as he calls it, a binman. A few months earlier, he had been writing scholarly papers. It was humiliation, on starvation wages. These memories Greg calls his “scars”. Over time, he took on more work: one day of teaching at Nottingham and another at a rival university.