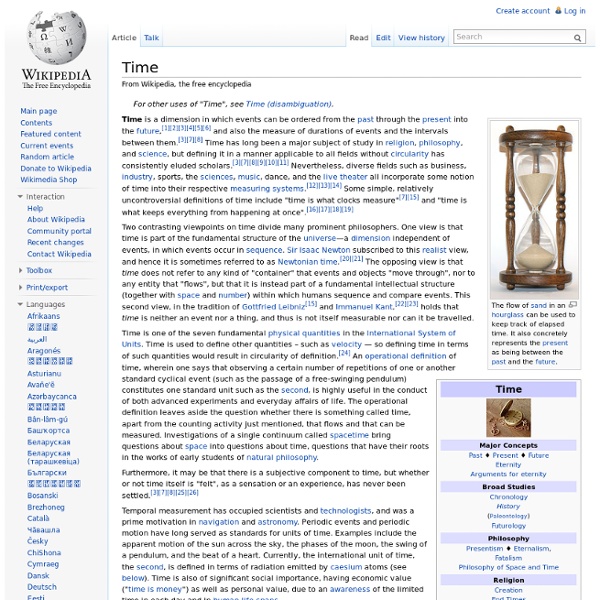 The flow of sand in an hourglass can be used to keep track of elapsed time. It also concretely represents the present as being between the past and the future. Time is a dimension in which events can be ordered from the past through the present into the future,[1][2][3][4][5][6] and also the measure of durations of events and the intervals between them.[3][7][8] Time has long been a major subject of study in religion, philosophy, and science, but defining it in a manner applicable to all fields without circularity has consistently eluded scholars.[3][7][8][9][10][11] Nevertheless, diverse fields such as business, industry, sports, the sciences, and the performing arts all incorporate some notion of time into their respective measuring systems.[12][13][14] Some simple, relatively uncontroversial definitions of time include "time is what clocks measure"[7][15] and "time is what keeps everything from happening at once".[16][17][18][19] Temporal measurement and history[edit] World time[edit]

Council of Vienne 1311-1312 A.D. re Unum Sanctum 1302 v Magna Carta 1215 In 1301 King Philip had a French bishop tried for treason and imprisoned. This was intolerable and Boniface issued a reproving bull, which in 1302 was decisively rejected by the Estates General, even the French clergy supporting their king. Boniface announced that he would depose Philip if need be and issued the bull Unam Sanctam('One Holy'),the most famous papal document of the Middle Ages, affirming the authority of the pope as the heir of Peter and Vicar of Christ over all human authorities, spiritual and temporal. Spiritual power, according to the bull, rests in the hands of the Church. Temporal power is in the hands of kings and soldiers, but is to be exercised only as the Church permits, because things spiritual are superior to things temporal. If temporal power errs, it is to be judged by the spiritual power.

Unit of time Visualisation of units of time from one second to one average year of the Gregorian calendar A unit of time or time unit is any particular time interval, used as a standard way of measuring or expressing duration. The base unit of time in the International System of Units (SI), and by extension most of the Western world, is the second, defined as about 9 billion oscillations of the caesium atom.

Spreading The Word: Rome WAS built in a day A kingdom of ideas Once upon a time there was a city called Rome. For five centuries it was a republic and much more beautiful, for it was run by the people who got along nicely. And then one day it became a kingdom of ideas, when a family came along from nowhere. How Words Can Be Used as Magic Spells How Words Can Be Used as Magic Spells Words are not just elements of speech or writing, because they can be used to strengthen the effects of magic, which is the art of directing and controlling energy. When spoken out loud, words transform into frequencies and vibrations that can be used to direct energy.

Revelation of the Method, Predictive Programming and the Prime Directive Zen Gardner, GuestWaking Times These are big subjects and well worth investigation. Knowing the mechanics of the matrix we find ourselves in is extremely empowering and liberating. There’s a saying, “If you’re not wondering if you’re under mind control, you probably are.” Think about that one for a minute. I find that profoundly true. The Chaining of Saturn/Sol « Author Elva Thompson In the beginning was the Golden Age, when men of their own accord, without threat of punishment, without laws, maintained good faith and did what was right….The earth itself, without compulsion, untouched by the hoe, unfurrowed by any share, produced all things spontaneously….it was a season of everlasting spring. Ovid in the sixth book of his Metamorphoses. The Golden Age of Sol/Saturn Saturn/Sol In antiquity Saturn was our sun… and we lived in Paradise, the Golden Age of Man.

Soul-Catching Net — Are We “Recycled” at Death to Remain in the Matrix? 23rd July 2015 By Makia Freeman Contributing Writer for Wake Up World The idea of a soul-catching net or soul net that awaits us at death – and keeps us in the Matrix – is a grim and highly disturbing notion, but one which I believe has to be considered by all serious researchers of the global conspiracy. True free thinkers want to know exactly where the global conspiracy rabbit hole ends. Ley Lines and The Meaning Of Adam Ley Lines and The Meaning Of Adam by Richard Leviton and Robert Coons "As Above, So Below" - Hermes Trismegistos Hermes' Geomancy Looming behind all concepts of the planetary Grid stands the ancient magus, Hermes Trismegistos, Thrice-Greatest Master Geomancer of Earth, with his Smagdarine Emerald Tablets, the keys to Gaia's (Earth's) energy body. That same master Grid engineer, the Gods' messenger for Earth, later passed the flame of his mastery, for our time, to the Archangel Michael with his solar initiatory sword.