Ancient Egyptian concept of the soul. Ib (heart)[edit] To ancient Egyptians, the heart was the seat of emotion, thought, will and intention. 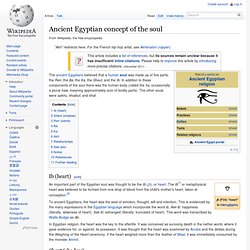 This is evidenced by the many expressions in the Egyptian language which incorporate the word ib, Awt-ib: happiness (literally, wideness of heart), Xak-ib: estranged (literally, truncated of heart). This word was transcribed by Wallis Budge as Ab. In Egyptian religion, the heart was the key to the afterlife. It was conceived as surviving death in the nether world, where it gave evidence for, or against, its possessor. Sheut (shadow)[edit] A person's shadow or silhouette, Sheut (šwt in Egyptian), is always present. The shadow was also representative to Egyptians of a figure of death, or servant of Anubis, and was depicted graphically as a small human figure painted completely black. Ren (name)[edit] Ba[edit] Ba takes the form of a bird with a human head.

The 'Ba' (bꜣ) was everything that makes an individual unique, similar to the notion of 'personality'. Ka[edit] Akh[edit] Akh glyph. Ghosts in ancient Egyptian culture. Akh glyph – The soul and spirit re-united after death There was widespread belief in ghosts in ancient Egyptian culture in the sense of the continued existence of the soul and spirit after death, with the ability to assist or harm the living, and the possibility of a second death. 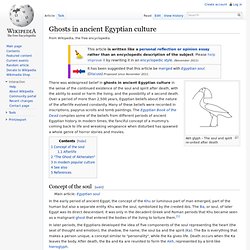 Over a period of more than 2,500 years, Egyptian beliefs about the nature of the afterlife evolved constantly. Many of these beliefs were recorded in inscriptions, papyrus scrolls and tomb paintings. The Egyptian Book of the Dead compiles some of the beliefs from different periods of ancient Egyptian history. In modern times, the fanciful concept of a mummy's coming back to life and wreaking vengeance when disturbed has spawned a whole genre of horror stories and movies. Concept of the soul[edit] If the proper funeral rites were executed and followed by constant offerings, the Akh could later be reanimated.

Afterlife[edit] Practical Applications of Heka. If we look at the glyph for 'Ka', note the part of it which cooresponds to the elbow and how this relates to the height position of the elbow. 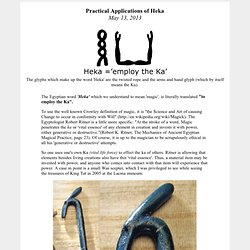 For the height of the elbow is at about the level of what other traditions know as the 'fire chakra'(Manipura). One Pyramid text declares “Unis’s powers are on his torso.” (_The Ancient Egyptian Pyramid Texts_, translated by James P. Allen, page 51) A frequent phrase concerning possessing magical powers is, “’…I have filled my belly with magic…” (Coffin Text spell 239), “I have called to mind all the magic which is in my belly.” (Coffin Text spell 657), both via Ancient Egyptian Magic by Bob Brier, pages 124, 126) So for any magical attempt, it is necessary to 'call to mind' this stored energy. "You undertake a GBM working because you want to understand something or because you want to change something. The Egyptologist James Allen is in accord with this 'understanding' and/or 'changing'. In order to have effective magic, we must feed our ka. Encyclopedia: Term: Khu. Akh: One of the three parts of the soul according to ancient Egyptian belief. 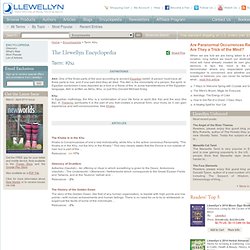 A person must have all three parts to live, and if one part died they all died. The Akh is the immortality of a person; the spirit. In Egyptian symbolism it was depicted as a bird or a flame of fire. In some transliterations of the Egyptian language, Akh is written as Akhu, Ikhu, or just Khu.Donald Michael Kraig Khu: Egyptian Glossary. Glossary of Egyptian Mythology © 1997 - 2011 Deurer All Rights Reserved. 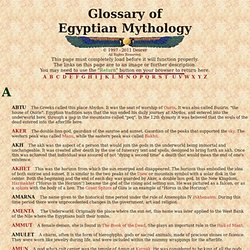 This page must completely load before it will function properly. The links on this page are to an image or further description. You may need to use the "Return" button on your browser to return here. ABTU. . AKER. . AKH. . AKHET. . AMARNA. . AMENTA . . Life in Ancient Egypt. The Ancient Egyptian Concept of the Soul. By Caroline Seawright To the Ancient Egyptians, their soul, their being, were made up of many different parts. 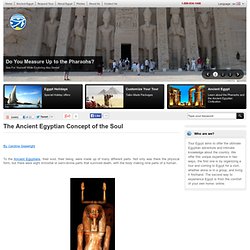 Not only was there the physical form, but there were eight immortal or semi-divine parts that survived death, with the body making nine parts of a human. The precise meaning of ka, ba, ach (akh), `shm (sekhem), and so on is no longer clear to us. Well-meaning scholars try again and again and again to force the Egyptian idea of the soul into our traditional categories without enabling us to understand even a little of it any better -- J. 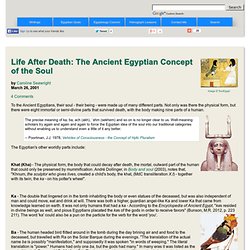 Not only was there the physical form, but there were eight immortal or semi-divine parts that survived death, with the body making nine parts of a human. The precise meaning of ka, ba, ach (akh), `shm (sekhem) and so on is no longer clear to us. Well-meaning scholars try again and again and again to force the Egyptian idea of the soul into our traditional categories without enabling us to understand even a little of it any better. The Egyptian's other worldly parts include: Khat (Kha) - The physical form, the body that could decay after death, the mortal, outward part of the human that could only be preserved by mummification.

André Dollinger, in Body and soul (2003), notes that, "Khnum, the sculptor who gives lives, created a child's body, the khat, (MdC transliteration X.t) - together with its twin, the ka - on his potter's wheel". Image © Caroline Seawright after Ahmed Shaaban. Ancient Egyptian concept of the soul.