How to Write Articles and Essays Quickly and Expertly 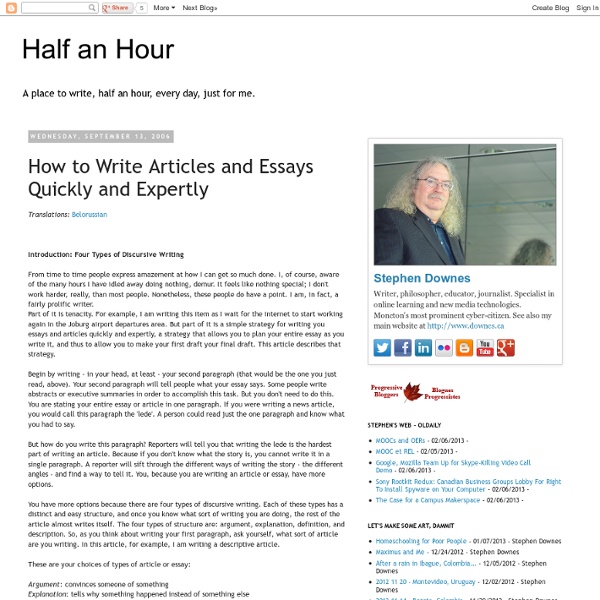 Translations: Belorussian Introduction: Four Types of Discursive Writing From time to time people express amazement at how I can get so much done. I, of course, aware of the many hours I have idled away doing nothing, demur. Begin by writing - in your head, at least - your second paragraph (that would be the one you just read, above). But how do you write this paragraph? You have more options because there are four types of discursive writing. These are your choices of types of article or essay: Argument: convinces someone of something Explanation: tells why something happened instead of something else Definition: states what a word or concept means Description: identifies properties or qualities of things An argument is a collection of sentences (known formally as 'propositions') intended to convince the reader that something is he case. An explanation tells the reader why something is the case. A definition identifies the meaning of some word, phrase or concept. Organizing Your Writing

How to Deliver Bad News in Writing While you can't turn bad news into good through clever wording, the way that you deliver bad news in writing can affect how it is received the same way that it does when speaking. Some speakers know how to deliver bad news, and others only make it worse. The same is true in writing. The introduction is very important. It sets the context for the bad news, and context has a lot to do with how bad news is received. The bad news itself should go in the middle of your message. Once delivered, the bad news should be followed by the remedy, lesson learned, or course of action that will result in future prevention or improvement. Conclude by showing that you care. The key to delivering bad news is trust. By Carl Dickson, Founder of CapturePlanning.com Click here for more free articles like this one

Who May Have Word Finding Difficulties Word finding problems have also been identified in children with specific language difficulties (SLI) (Fried-Oken, 1984; Katz, Curtis & Tallal, 1992; Lahey & Edwards, 1996; 1999; Leonard, Nippold, Kail, Hale, 1983; Rubin & Liberman, 1983; Schwartz & Solot, 1980). These children have word finding difficulties in either or both single word and discourse retrieval contexts (McGregor & Leonard, 1995). In single word retrieval contexts, students with SLI: The relationship between word finding skills and fluency difficulties, particularly stuttering, has been examined. In general, research and clinical reports have reported contrasting results suggesting that some, but not all, children who have fluency difficulties may have weak word finding skills (Boysen & Cullinan, 1971; P. Back to Top Students Who Have Attention Difficulties and/or are Hyperactive (ADHD) Back to Top References for Students Who May Have Word Finding Difficulties Ackerman, P.T., Dykman, R.A., & Gardner, N.Y. (1990).

Risky Business Comment Risky business Health-scare stories often arise because their authors simply don’t understand numbers Ben Goldacre Monday June 20, 2005 The Guardian Competence always looks better from a distance, but I have a confession to make: I’m a doctor, and I just don’t understand most of the stories on health risks in the news. Last week, we were told that red meat causes bowel cancer, and Nurofen causes heart attacks, but I was no wiser. Article continues HG Wells, 150 years ago, said that statistical thinking would one day be as important as the ability to read and write in a modern technological society. Let’s say the risk of having a heart attack in your 50s is 50% higher if you have high cholesterol: that sounds pretty bad. Natural frequencies are readily understandable, because instead of using probabilities, or percentages, they use concrete numbers, just like the ones you use every day to check if you’ve lost a kid on a coach trip, or got the right change in a shop.

Written Expression Learning Disorder Treatment Treatment of learning problems generally occurs outside of medical environments. Treatment approaches include educational remediation of poor skills, making accommodations to the learning environment, and addressing any comorbid medical and mental health issues (possibly including pharmacotherapy). When the child meets special education eligibility criteria, the academic remediation can be delivered through special services at school. The treatment of language disorders including disorders of written expression should include skill development (decoding), a holistic approach to remediation, as well as necessary accommodations. A holistic approach should begin with the student’s own ideas and follow a series of highly structured steps to narrow ideas to one topic, then help the student to create a first draft. Writing as a process In remediating poor writing skills, using methods of teaching writing that have proven most effective is helpful. Accommodations to the learning environment

Phrasebank Guardian Unlimited | Life | Don&#039;t dumb me down Talk about bad science here. OK, here's something weird. Every week in Bad Science we either victimise some barking pseudoscientific quack, or a big science story in a national newspaper. Now, tell me, why are these two groups even being mentioned in the same breath? Why is science in the media so often pointless, simplistic, boring, or just plain wrong? Like a proper little Darwin, I've been collecting specimens, making careful observations, and now I'm ready to present my theory. It is my hypothesis that in their choice of stories, and the way they cover them, the media create a parody of science, for their own means. Science stories usually fall into three families: wacky stories, scare stories and "breakthrough" stories. Wacky stories don't end there. A close relative of the wacky story is the paradoxical health story. At the other end of the spectrum, scare stories are - of course - a stalwart of media science. But enough on what they choose to cover. Why?

The year 2008 in photographs (part 1 of 3) 2008 has been an eventful year to say the least - it is difficult to sum up the thousands of stories in just a handful of photographs. That said, I will try to do what I've done with other photo narratives here, and tell a story of 2008 in photographs. It's not the story of 2008, it's certainly not all stories, but as a collection it does show a good portion of what life has been like over the past 12 months. This is a multi-entry story, 120 photographs over three days. Watch for part 2 and part 3 tomorrow and the next day. (40 photos total) Lightning bolts appear above and around the Chaiten volcano as seen from Chana, some 30 kms (19 miles) north of the volcano, as it began its first eruption in thousands of years, in southern Chile May 2, 2008.