The first truly social network for mobile gamers. I did a series of controlled experiments with the Attack Boost vs Defense Boost to determine which boost was better. 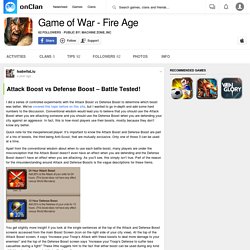 We’ve covered this topic before on this site, but I wanted to go in-depth and add some hard numbers to the discussion. Conventional wisdom would lead you to believe that you should use the Attack Boost when you are attacking someone and you should use the Defense Boost when you are defending your city against an aggressor. In fact, this is how most players use their boosts, mostly because they don’t know any better. Quick note for the inexperienced player: It’s important to know the Attack Boost and Defense Boost are part of a trio of boosts, the third being Anti-Scout, that are mutually exclusive. Only one of those 3 can be used at a time. You get slightly more insight if you look at the single sentences at the top of the Attack and Defense Boost screens accessed from the main Boost Screen (icon on the right side of your city view). 11-26-2015 - Take a Break From the Holidays and Build the Top Trap Account for 2016. 5 Advanced Strategies For Trap Accounts - Game Of War Real Tips.

To be an effective Trap Account, you should understand the Enemy’s strategy. 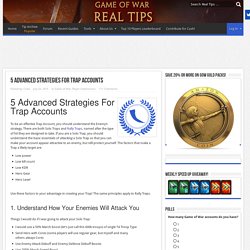 Best Trap Account Builds - Game Of War Real Tips. Sometimes making your own decision on how you want your Trap Account to be can be hard. 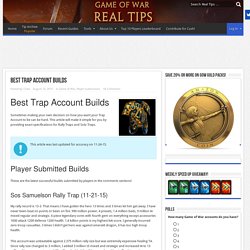 This article will make it simple for you by providing exact specifications for Rally Traps and Solo Traps. This article was last updated for accuracy on 11-24-15. Player Submitted Builds These are the latest successful builds submitted by players in the comments sections! 4 Piece Cores Strategy for Traps - Game Of War Real Tips. This article is geared towards that mid-range trap account that has some core research done and might even have 1 preset unlocked. 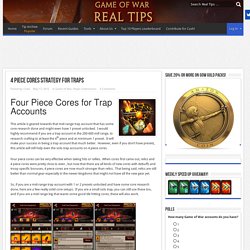 I would highly recommend if you are a trap account in the 200-600 mill range, to research crafting to at least the 4th piece and at minimum 1 preset. It will make your success in being a trap account that much better. However, even if you don’t have presets, this article will still help even the solo trap accounts on 4 piece cores. Four piece cores can be very effective when taking hits or rallies. Turtle accounts. How To Build a Great Rally Trap - Game Of War Real Tips. First off I've tried rally traps at most power levels 400-500, 600-700. 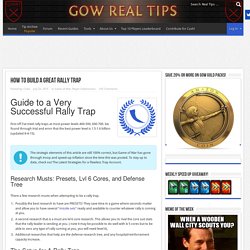 Ive found through trial and error that the best power level is 1.5-1.6 billion (updated 8-4-15). The strategic elements of this article are still 100% correct, but Game of War has gone through troop and speed-up inflation since the time this was posted. To stay up to date, check out The Latest Strategies for a Flawless Trap Account. Research Musts: Presets, Lvl 6 Cores, and Defense Tree. The Latest Strategies for a Flawless Trap Account - Game Of War Real Tips. Over the past couple of years as Game of War has evolved, trap play has also become more sophisticated. 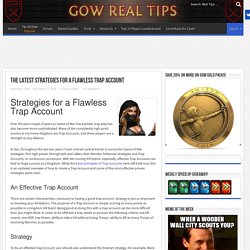 Many of the consistently high point scorers in my home Kingdom are Trap Accounts, and these players are a strength to any Alliance. In fact, throughout the last two years I have noticed cyclical trends in successful Game of War strategies: first high power Strongholds and rallies, then Wonder Defensive strategies and Trap Accounts, in continuous succession. With tier scoring Kill Events, especially, effective Trap Accounts can lead to huge success as a Kingdom. Rally Breaker/Rally Trap - Game of War: TaterSalad. An Ode to the Best Trap I've Ever Seen (A.K.A how to take 22 rallies and win them all) - Game of War Tips. In an effort to blog more often, I will try to blog shorter stories. 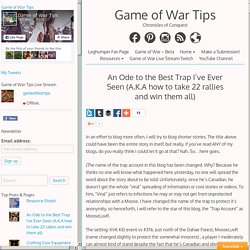 The title above could have been the entire story in itself, but really, if you’ve read ANY of my blogs, do you really think I could let it go at that? Nah. So…here goes. (The name of the trap account in this blog has been changed. Why? The setting: KVK Kill event vs #376. KVK starts. (Some time passes) A rally is up, it’s fake, but we don’t know this.

The Rally struck…..and a little red icon appears over his SH..no troops returning to the attacking army. Almost immediately, another rally comes up, same alliance, someone else will attack and save the hero! And then, the worst thing that could happen…happened….. Someone called out that we should get more reinforcements in as a few had been lost in the battle. But then we sat and watched as more outlanders showed up. Next thing they try is a 2 alliance simultaneous rally. The rallies are going to hit just seconds apart…will MooseLuvR be able to heal in time? No! Related. 2 Rally Traps That Will Make Your Hero Cry - Game Of War Real Tips. Both models below require exceptional hero gear. 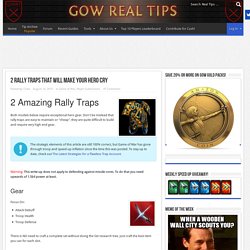 Don't be mislead that rally traps are easy to maintain or "cheap", they are quite difficult to build and require very high end gear. Warning: This write-up does not apply to defending against missile cores. To do that you need upwards of 1.5bil power at least. Gear Focus On: