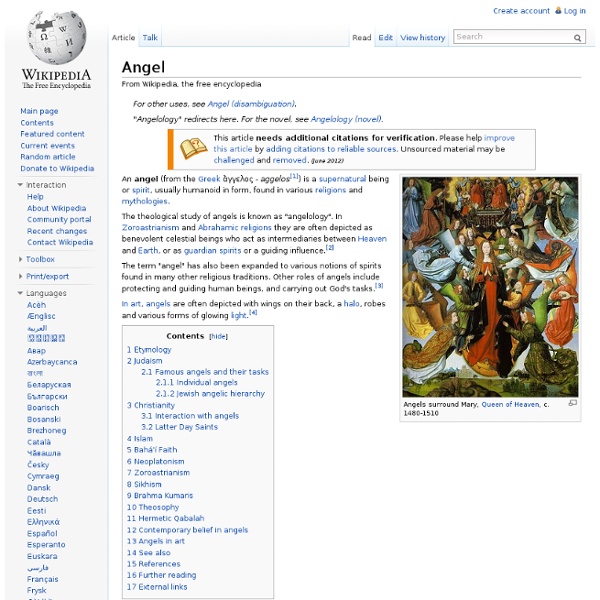 An angel (from the Greek ἄγγελος - ángelos[1]) is a supernatural being or spirit, often depicted in humanoid form with feathered wings on their backs and halos around their heads, found in various religions and mythologies. The theological study of angels is known as "angelology". In Zoroastrianism and Abrahamic religions they are often depicted as benevolent celestial beings who act as intermediaries between Heaven and Earth, or as guardian spirits or a guiding influence.[2] The term "angel" has also been expanded to various notions of spirits found in many other religious traditions. Other roles of angels include protecting and guiding human beings, and carrying out God's tasks.[3] Etymology[edit] The word angel in English is a fusion of the Old English/Germanic word engel (with a hard g) and the Old French angele. Judaism[edit] The term מלאך (mal'āk̠) is also used in the Tanakh; a similar term, ملائكة (malā'ikah), is used in the Qur'an. "... Jewish angelic hierarchy[edit]

Shanghai Dock: A Portland Mystery Solved I promised that I would have Guest Bloggers to post here at Weird Portland and here is the first. I would like to introduce you to my friend Barney Blalock. Barney is as obsessed with Portland's history as I am, if you need proof you should check out his website. He has also just published a book at History Press I suggest you all go buy it right away. Barney has a very personal style of writing about history that I enjoy a lot. When I was a lad, way back in the 1960s, Portland had the best surplus store on the face of the earth. In aerial photos of Portland from the late 1930s to the early 1970s you can see the operation along the riverbank, just south of the Ross Island Bridge. This same piece of real estate plays an important role in Portland's underground history—the history of shanghaiing, and the too well-known "shanghai tunnels," a feature that has come to symbolize Portland as much as Voo Doo Donuts. But, Shanghai Dock is Real! It was an ill-fated business from the start.

Witch ball | Tools of the witch A witch ball or speculum is a hollow sphere of plain or stained glass hung in cottage windows in 18th century England to ward off evil spirits, witch's spells or ill fortune, though the Witch's Ball actually originated among cultures where witches were considered a blessing and these witches would usually "enchant" the balls to enhance their potency against evils or to scry and divine things to come. Globes measure up to seven inches in diameter, and are occasionally decorated in enameled stripes and swirls or varying colours. Sometimes the speculum was a magic mirror, a polished stone, or a crystal ball. Some are mirrored for use as convex mirrors. Some witches fashioned specula from black bowls filled with water. According to Albertus Magnus, a famous medieval magician, a speculum could be created in the following manner: Buy a mirror and inscribe upon it S. Before they were put to use, specula had to be consecrated by exposure to the light of a full moon. Tools of the witch

Brujeria | Definition and terms Brujería is the Spanish word for witchcraft. Brujeria also refers to a mystical sect of male witches in the southermost part of Argentina. Both men and women can be witches, brujos and brujas respectively. Brujos is the plural term that can mean either a group of male witches or both male and female witches. The brujería of Hispanophone America is a combination of Spanish and the indigenous people of those regions (predominantly Mesoamerican and other South American indigenous regions), so it is heavily influenced by ancient paganism. Further south of that region, brujería is diverse, from a similar mix of indigenous and Spanish culture, to the European styles found in Argentina and Uruguay. The brujos from Spain are either Christian or pagan-witches. The latter group are not Christian and either practice secretly or veil their practices under Catholic ones. In Spain and European descendant South Americans, the witch is considered by many to be fictional. Definition and terms

Witchcraft Lexicon | Definition and terms WITCHCRAFT: the alleged use of supernatural or magical powers, usually in order to inflict harm or damage upon members of a community or their property. Other uses of the term distinguish between bad witchcraft (black magic) and good witchcraft (white witchcraft or wisecraft), with the latter often involving healing, and helping the community by communicating with the spirits. WITCH: a practitioner of witchcraft. WHITE WITCH: a good or wise witch that help the community. WITCH HUNT: a search for witches or evidence of witchcraft, often involving moral panic, mass hysteria and lynching, but in historical instances also legally sanctioned and involving official witchcraft trials. THE BURNING TIMES: the period that strech from the 14th to the early 18th century during which people where persecuted and sometimes killed for witchcraft. ATHAME (also ATHALME): A dagger used to cast a circle and perform other witchcraft rituals. GROVE: A group of covens. Definition and terms

Necromanteion One of the underground tunnels of the Necromanteion, through which pilgrims would walk Labyrinth halls leading to the central room of the Sanctuary The Necromanteion or Nekromanteion (Greek: Νεκρομαντεῖον) was an ancient Greek temple of necromancy devoted to Hades and Persephone. Background[edit] Central room of the Sanctuary The word Necromanteion means "Oracle of Death", and the faithful came here to talk with their dead ancestors. Ritual use[edit] The underground tunnel Ritual use of the Necromanteion involved elaborate ceremonies wherein celebrants seeking to speak to the dead would start by gathering in the ziggurat-like temple[5] and consuming a meal of broad beans, pork, barley bread, oysters, and a narcotic compound.[2][6] Following a cleansing ceremony and the sacrifice of sheep, the faithful would descend through a chthonic series of meandric corridors leaving offerings as they passed through a number of iron gates. Archaeological site[edit] History[edit] References[edit]

Necromancy The word "necromancy" is adapted from Late Latin necromantia, itself borrowed from post-Classical Greek νεκρομαντεία (nekromanteía), a compound of Ancient Greek νεκρός (nekrós), "dead body", and μαντεία (manteía), "prophecy or divination"; this compound form was first used by Origen of Alexandria in the 3rd century CE.[3] The Classical Greek term was ἡ νέκυια (nekyia), from the episode of the Odyssey in which Odysseus visits the realm of the dead, νεκυομαντεία in Hellenistic Greek, rendered as necyomantīa in Latin, and as necyomancy in 17th-century English.[4] Antiquity[edit] Early necromancy was related to – and most likely evolved from – shamanism, which calls upon spirits such as the ghosts of ancestors. Classical necromancers addressed the dead in "a mixture of high-pitch squeaking and low droning", comparable to the trance-state mutterings of shamans.[5] Necromancy was prevalent throughout Western antiquity with records of its practice in Babylon, Egypt, Greece, and Rome.

Cleromancy Cleromancy is a form of divination using sortition, casting of lots, or casting bones or stones, in which an outcome is determined by means that normally would be considered random, such as the rolling of dice, but are sometimes believed to reveal the will of God, or other supernatural entities. In classical civilization[edit] In Judeo-Christian tradition[edit] Casting of lots occurs relatively frequently in the Bible, and many biblical scholars think that the Urim and Thummim served this purpose. In the Hebrew Bible, there are several cases where lots were cast as a means of determining God's mind: In the Book of Leviticus 16:8, God commands Moses, "And Aaron shall cast lots upon the two goats; one lot for the LORD, and the other lot for the scapegoat." Other places in the Hebrew Bible relevant to divination: In the Eastern Orthodox Church this method of selection is still occasionally used. In Scandinavia[edit] "To divination and casting of lots, they pay attention beyond any other people.

Witchcraft and divination in the Hebrew Bible This article discusses the Hebrew Bible. See Christian views on witchcraft for Christian interpretations. Various forms of witchcraft and divination are mentioned in the Hebrew Bible, generally with a disapproving tone. The Masoretic Text of the Torah forbids: The exact difference between the three forbidden forms of necromancy is a matter of uncertainty; yidde'oni is usually only mentioned together with ba'al ob, and its semantic similarity to doresh el ha-metim raises the question of why all three are mentioned in the same verse of Deuteronomy.[10] Classical Jewish sources argued that yidde'oni might be another form of ventriloquism, in which the voice is cast into at a bone which is placed into the ventriloquist's mouth. Rashi describes the doresh el ha-metim as a person who would sleep in cemeteries, after having starved themselves, in order to become possessed. See also[edit] Notes and references[edit]