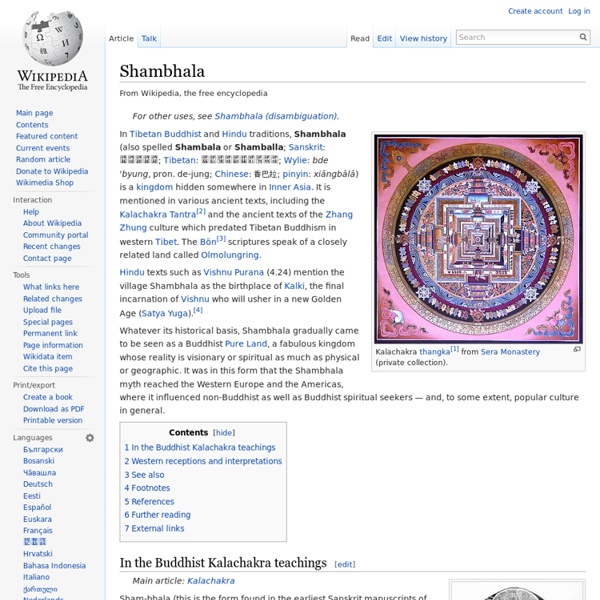 In Tibetan Buddhist and Hindu traditions, Shambhala (also spelled Shambala or Shamballa; Sanskrit: शंभाल; Tibetan: བདེ་འབྱུང་; Wylie: bde 'byung, pron. de-jung; Chinese: 香巴拉; pinyin: xiāngbālā) is a kingdom hidden somewhere in Inner Asia. It is mentioned in various ancient texts, including the Kalachakra Tantra[2] and the ancient texts of the Zhang Zhung culture which predated Tibetan Buddhism in western Tibet. The Bön[3] scriptures speak of a closely related land called Olmolungring. Hindu texts such as Vishnu Purana (4.24) mention the village Shambhala as the birthplace of Kalki, the final incarnation of Vishnu who will usher in a new Golden Age (Satya Yuga).[4] Whatever its historical basis, Shambhala gradually came to be seen as a Buddhist Pure Land, a fabulous kingdom whose reality is visionary or spiritual as much as physical or geographic. §In the Buddhist Kalachakra teachings[edit] Shambhala is ruled over by Lord Maitreya. Manjushri Yashas (Tib. §See also[edit] §[edit] Related:  Angel's

Sanat Kumara Shamballah is said by the adherents to the Ascended Master Teachings, to be a floating city manifested on the etheric plane somewhere above the Gobi Desert in the borderlands of Mongolia.[4][5] The Great White Brotherhood is a spiritual 'fraternity' of Ascended Beings, including Lord Sunat Kumara, long since dedicated to the eventual Salvation of Mankind and the establishment of Divine Law again in this Three-dimensional reality. According to Elizabeth Van Buren, the Brotherhood once maintained (earthly) headquarters hidden in a remote valley near a sacred lake in old Tibet, until relatively recently, when, possibly due to the surmised threat of Communist China, they withdrew, allegedly through subterranean tunnels to an alternative earthly location in Peru, where they are still reported as having an earth base (circa 1985).[6] Sanat Kumara in Hinduism[edit] The Kumar resides in the most sublime center of our planet, Shamballa, the sahasrara of the world. Sanat Kumara in Theosophy[edit]

Great White Brotherhood History[edit] The Mahatma Letters began publication in 1881 with information purportedly revealed by "Koot Hoomi" to Alfred Percy Sinnett, and were also influential on the early development of the tradition. Koot Hoomi, through Sinnett, revealed that high-ranking members of mystic organizations in India and Tibet were able to maintain regular telepathic contact with one another, and thus were able to communicate to each other, and also to Sinnett, without the need for either written or oral communications, and in a manner similar to the way that spirit mediums claimed to communicate with the spirits of the dead. The letters published by Sinnett, which proposed the controversial doctrine of reincarnation, were said to have been revealed through this means.[5] Eckartshausen's idea was expanded in the teachings of Helena P. Ideas about this secret council of sages, under several names, were a widely shared feature of late nineteenth century and early twentieth century esotericism. " . . .

Holon Place in Israel Holon (Hebrew: חוֹלוֹן‬ (audio) ; Arabic: حُولُون‎ Ḥūlūn) is a city on the central coastal strip south of Tel Aviv, Israel. Holon is part of the metropolitan Gush Dan area. Etymology[edit] The name of the city comes from the Hebrew word holon, meaning "(little) sand". History[edit] Holon was founded on sand dunes six kilometers (3.7 miles) from Tel Aviv in 1935.[3] The Łódzia textile factory was established there by Jewish immigrants from Łódź, Poland, along with many other industrial enterprises.[3] In the early months of the 1948 Arab–Israeli War, Holon was on the front line, with constant shooting taking place on the border with the village of Tel A-Rish to its northwest—a suburb of Arab Jaffa—and clashes also in the direction of the town of Yazur to the east. Convoy being assembled at Holon. 1948 After the establishment of the state, Holon expanded to include Tel A-Rish (renamed "Tel Giborim", "The Mound of the Heroes") and the orange groves of Yazur. Mayors[edit]

The 72 Angels of God .In the Zohar (155 BC), the Hebrew Book of Splendour, it is said that God sent Archangel Raziel (Ratziel) with a book for Adam. This book was about the holy mysteries of the highest nature, the Holy wisdom of the 72 kinds of knowledge, virtue and power. In the Kabbalistic Tree of Life, these virtues were structured in nine groups of eight Angels, which are ruled over by its own Archangel. It is aid that this information concerning the rituals of the 72 Angels which originally came to light from a 12th Century manuscript, discovered in Spain. Which indicated that there are 72 Angels which guide humanity. Where do the names come from? In this work you will learn the powers of the Angels, how to mediatate on their Name, perform simple rituals which will bring you closer to that particular Angel, generate talismans that hold their powers. The worlds major religions all believe in Angels - Christianity, Judaism, Zoroastrianism, Hinduism, Buddhism and Islam all have their Angels.

War of the Sons of Light Against the Sons of Darkness The War Scroll, found in Qumran Cave 1. The War of the Sons of Light Against the Sons of Darkness, also known as War Rule, Rule of War and the War Scroll, is a manual for military organization and strategy that was discovered among the Dead Sea Scrolls. The manuscript was among the scrolls found in Qumran Cave 1, acquired by the Hebrew University of Jerusalem and first published posthumously by Eleazar Sukenik in 1955.[1] The document is made up of various scrolls and fragments including 1QM, and 4Q491–497.[1] It is possible that The War of the Messiah is the conclusion to this document.[2] The 4Q491–497 fragments were published by Maurice Baillet in Discoveries in the Judaean Desert, 7 and comprise a shorter recension of the War Scroll.[1] History[edit] Scholars have been unable to determine the exact author of the text. Contents[edit] There are many key differences in the way the War against the Kittim and the War of Divisions are described. Structure[edit] i. ii. iii–ix. x–xiv. xv–xix.

God's 72 angels names, guardian/guide angel name of GOD The angels are energetic embodiments and vibratory expressions of the qualities and person of the divine. They awaken our consciousness to the presence of the divine that already exist in each and every human being ( our soul ). By partaking of them we activate aspects of the divine within us. While we are said to contain all the angelic characters within us and tune to them in different degrees, we probably have correspondence to particular angelic forces more, according to our time and date of birth or conciving time... Angels are neither male nor female, but they are often referred to as he or she. The image of angels as we understand them in Western Christian society had probebly some of their origins in the ancient Persian religion of Zoroastrianism, an ancient religion during the Persian empires (559 BC to ) and was the most powerful world religion at the time of Jesus Christ. Amesha Spentas (Phl. · Vohu Mano (Phl. · Asha Vahishta (Phl. · Khshathra Vairya (Phl. · Haurvatat (Phl.

Angels Kabbalah – Discover more about this connection! The Kabbalah is a very old Jewish Mystical tradition. Why is it said that there are 72 Angels in the Kabbalah? What are their roles and what is their connection to the 4 elements and the 12 astrological signs? Discover the connections in the Angels Kabbalah. What is the Kabbalah? It is said that the Kabbalah was communicated to Adam, the first man on Earth, by an Guardian Angel: Raziel. It is also said to hold the unwritten part of the Laws that were transmitted to Men by Moses. According to the Kabbalistic tradition, God’s name is composed of 72 letters. 72, Guardian angels at your disposal in the Angels Kabbalah 72, angelical number par excellence… In Kabbalistic tradition, 72 is looked upon as the Number of perfect Completeness. Elsewhere, it is clearly said that these 72 Angels have been assigned by the Creator and Master of the Universe to serve men. Angels Kabbalah – 72 Guardian angels ruling They have power over the four Elements and the twelve Astrological Signs:

The Kabbalah Centre | Angels How many people have never heard expressions regarding angels, in some form of or another? He or she "must have a guardian angel" is a remark we often hear when a near­ tragedy somehow results in a happy ending. We see these wonderful winged crea­tures in movies, on television, in books and magazines. What so amazes me is that, with all this widespread "familiarity" with the subject, so very little atten­tion has yet been directed to the origins of our familiarity, or to the origins of angels themselves. Angels, along with their Hebraic names, are just another example, just another aspect of the fast‑moving "Internet" of revolutionary knowledge that is now overtaking the consciousness of mankind. In our mod­ern lives, so riddled by sudden changes, immediate adaptation is the only choice available to us. This same idea applies to how we can come to grips with knowledge, unfamiliar to most of us, regarding angels. So, where do those uninvited thoughts come from? We are God.

Practical Magic: The Secret Teachings of the Book of Raziel the Angel Within the varied teachings of the Jewish mystical tradition known as Kabbalah there is a minor tradition known as Practical Kabbalah (Kabbalah Ma’asit). This branch concerns itself with the use of magic, particularly the permitted ‘white magic’ as opposed to forbidden ‘black magic’. This tradition includes incantations of holy divine or angelic names, the use of amulets, and various forms of divination and soothsaying. One of the most prominent texts of this tradition is the Sefer Raziel HaMalakh – The Book of Raziel the Angel. This single, lengthy text “contains all of the knowledge of the Universe known at the time” including “everything from Astrology of the planets in our solar system to the creative life energy of this earth- birth, death, reincarnation of the soul and many other spiritual subjects” (Zucker, 2016). A page from the Book of Raziel. ( huberheights.co.il) Differences Between Mainstream and Practical Kabbalah Adam and the Angel Speak Passing the Text Through the Ages Ellie.