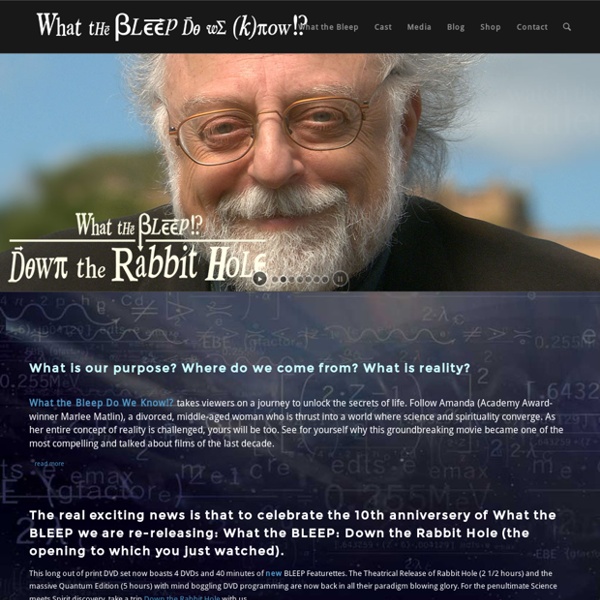 What is our purpose? Where do we come from? What is reality? {*style:<i>*}What the Bleep Do We Know!? {*style:</i>*}takes viewers on a journey to unlock the secrets of life. Follow Amanda (Academy Award-winner Marlee Matlin), a divorced, middle-aged woman who is thrust into a world where science and spirituality converge.

What Is Intelligence, Anyway? What Is Intelligence, Anyway? By Isaac Asimov What is intelligence, anyway? WHAT DO I MEAN WHEN I TALK ABOUT THE TWO FACTIONS? RMNEWS -- In 1989, the Publisher of Rumor Mill News, Rayelan Allan, married Captain Gunther K. Russbacher, Office of Naval Intelligence attached to the CIA. Gunther Russbacher is the first person to introduce the concept of "The Factions" to the world at large. Rumor Mill News was the first internet news site to to write about the "Secret War Between the Factions"... a mostly silent war that goes on behind the scenes.

druids Facts, information, pictures Druidism was the ancient magical religious faith found to be operating in Gaul and later England and Ireland as the Romans pushed northward that has been revived as a twentieth-century Neo-Pagan religion. The name derives from an old Welsh term for oak, implying that they are the people who know the wisdom of the trees. Julius Caesar encountered the Druids in Gaul in the first century B.C.E. where, among other duties, they oversaw the human sacrifices that were then part of the Celtic religion. "The Rise of the Creative Class" by Richard Florida Purchase Richard Florida's related book As I walked across the campus of Pittsburgh's Carnegie Mellon University one delightful spring day, I came upon a table filled with young people chatting and enjoying the spectacular weather. Several had identical blue T-shirts with "Trilogy@CMU" written across them---Trilogy being an Austin, Texas-based software company with a reputation for recruiting our top students. I walked over to the table. "Are you guys here to recruit?"

Nassim Haramein debunked One of the people whose views the Thrive movie showcases is a man named Nassim Haramein. A caption on the screen identifies Mr. Haramein as “Cosmologist, Inventor.” 10 Things to Remember When You Feel Lost and Alone “Being alone never felt right. Sometimes it felt good, but it never felt right.” ―Charles Bukowski Ecology of the Mind For thousands of generations we humans grew up in nature. Our teachers were flora and fauna and our textbooks thunderstorms and stars in the night sky. Our minds were like the forests, oases and deltas around which our cultures germinated: chaotic, wild, fecund. But in the last couple generations, we have largely abandoned the natural world, immersing ourselves in virtual realms. Today the synthetic environment rivals nature as a driving force in our lives, and the mental environment has become the terrain where our fate as humans will be decided.

Hollywood conservative unmasked as notorious Holocaust revisionist To those who knew him, or thought they knew him, he was a cerebral, fun-loving gadfly who hosted boozy gatherings for Hollywood's political conservatives. David Stein brought right-wing congressmen, celebrities, writers and entertainment industry figures together for shindigs, closed to outsiders, where they could scorn liberals and proclaim their true beliefs. Over the past five years Stein's organisation, Republican Party Animals, drew hundreds to regular events in and around Los Angeles, making him a darling of conservative blogs and talkshows. That he made respected documentaries on the Holocaust added intellectual cachet and Jewish support to Stein's cocktail of politics, irreverence and rock and roll. There was just one problem.

The Reckoning of Time The Reckoning of Time (Latin: De temporum ratione) is an Anglo-Saxon era treatise written in Latin by the Northumbrian monk Bede in 725. The treatise includes an introduction to the traditional ancient and medieval view of the cosmos, including an explanation of how the spherical earth influenced the changing length of daylight, of how the seasonal motion of the Sun and Moon influenced the changing appearance of the New moon at evening twilight, and a quantitative relation between the changes of the tides at a given place and the daily motion of the moon.[1] The Reckoning of Time describes a variety of ancient calendars, including the Anglo-Saxon calendar[2] and the Julian calendar.[3] The focus of De temporum ratione was calculation of the date of Easter, for which Bede described the method developed by Dionysius Exiguus.

Waking Up Body, Mind, Culture Check out Michael Stone's refreshing Marxist-Anarcho-Buddhist perspective on social change and activism below. Michael Stone is a psychotherapist, yoga teacher, Buddhist teacher, author and activist, committed to the integration of traditional teachings with contemporary psychological and philosophical understanding. His research and teaching explore the intersection of committed spiritual practice and social action. The following talk was recorded at W2 Media Cafe on Dec 2, 2012 in Vancouver BC. The event was a fundraiser for the upcoming short film REACTOR, directed by Ian MacKenzie and co-produced by Michael Stone. John Robbins’ Critique of Thrive Movie Humanity and Sanity Standing for a Thriving World (and challenging the Movie Thrive) By John Robbins Thrive is the name of a richly produced and controversial film that asks, and attempts to answer, some of the deepest questions about the nature of the human condition and what is thwarting our chances to prosper. Elaborately funded, with appealing imagery and beautiful music, it features interviews with many leading progressive voices.

University of Glasgow - University news - Archaeology strategy for Scotland launched at EAA conference Issued: Wed, 02 Sep 2015 18:00:00 BST The new archaeology strategy for Scotland has been launched in Glasgow at the first annual meeting of the European Association of Archaeologists to be held in Scotland. Fiona Hyslop, Cabinet Secretary for Culture, Europe and External Affairs, told 2,000 delegates from more than 80 countries - the largest ever gathering of archaeologists ever to meet in Scotland – that the strategy was an important step towards realising the full potential of Scotland’s outstanding archaeology. Scotland’s Archaeology Strategy has been developed by the Scottish Strategic Archaeology Committee, which was chaired by the University of Glasgow’s Professor of Historical Archaeology, Stephen Driscoll, and coordinated by Historic Scotland, with input from over 200 people from across the archaeology sector in Scotland and beyond.

We have met the 1%, and he is us Guest Post by Willis Eschenbach In explanation of my title, I fear I’ll have to go on a bit of a digression. Let me tell three stories, about people in three different parts of our amazing planet. STORY THE FIRST: In my early thirties, through a series of misunderstandings and coincidences I spent some time as the first mate on a sailboat in the Philippines. At one point we spent a couple months anchored up offshore from the Manila Yacht Club while we were getting some boat repairs done. As befits a young man with more testosterone than sagacity, I spent the evenings in the dives and nightclubs in the local red light district.