Trauma Ain't Training: An Open Letter to Parents Planning to Dupe Their Teens  An adult, posing as a kid, goes online to lure a teenage boy or girl into what could have been a dangerous situation. 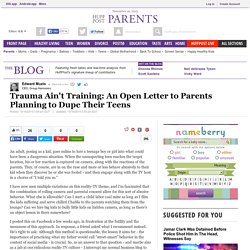 When the unsuspecting teen reaches the target location, his or her reaction is captured on camera, along with the reactions of the parents. They, of course, are in on the ruse and more or less behave abusively to their kid when they discover he or she was fooled - and then engage along with the TV host in a chorus of "I told you so. " I have now seen multiple variations on this reality-TV theme, and I'm fascinated that the combination of rolling camera and parental consent allow for this sort of abusive behavior. What else is allowable? Can I start a child labor coal mine as long as I film the kids suffering and serve chilled Chablis to the parents watching them from the lounge? I posted this on Facebook a few weeks ago, in frustration at the futility and the meanness of this approach.

Three Principles to Keep Privileged Kids from Becoming Jerks. The price of affluence: New research shows that privileged teens may be more self-centered. Many of today's most unhappy teens probably made the honor roll last semester and plan to attend prestigious universities, according to research by psychologist Suniya Luthar, PhD, of Columbia University's Teachers College. 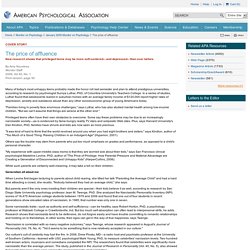 In a series of studies, Luthar found that adolescents reared in suburban homes with an average family income of $120,000 report higher rates of depression, anxiety and substance abuse than any other socioeconomic group of young Americans today. "Families living in poverty face enormous challenges," says Luthar, who has also studied mental health among low-income children. "But we can't assume that things are serene at the other end. " Privileged teens often have their own obstacles to overcome. Some say these problems may be due to an increasingly narcissistic society—as is evidenced by fame-hungry reality TV stars and solipsistic Web sites. Revealed: How pushy parents are driving privileged children to crime and drug abuse with relentless pressure to succeed. 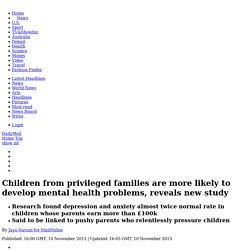 Scientists have found that the offspring of well-off parents are experiencing a major rise in levels of neuroses, leading to drug abuse, criminal behaviour and eating disorders. The research shows that depression and anxiety - the major factor behind such behaviour - is almost twice the normal rate in children whose parents earn more than £100,000 a year. ‘Whence the unrelenting pressure? Stanford Magazine - Article. Be tough! 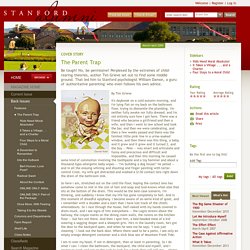 No, be permissive! Perplexed by the extremes of child-rearing theories, author Tim Grieve set out to find some middle ground. That led him to Stanford psychologist William Damon, a guru of 'authoritative parenting' who even follows his own advice. It's daybreak on a cold autumn morning, and I'm lying flat on my back on the bathroom floor, trying to dismantle the plumbing. I'm neither fully awake nor fully dressed, and I'm not entirely sure how I got here.

So here I am, stretched out on the cold tile floor, hoping the contact lens has somehow come to rest in the clot of hair and soap and God-knows-what-else that sits at the bottom of the drain. I am in over my head, if not in detergent, then at least in parenting. But the books don't tell me that, exactly, and what they do tell me seems so contradictory. And then there's William Damon. 'Helicopter Parent' Doesn't Mean What You Think It Means.

Fatal Distraction: Forgetting a Child in the Backseat of a Car Is a Horrifying Mistake. Is It a Crime? The defendant was an immense man, well over 300 pounds, but in the gravity of his sorrow and shame he seemed larger still. 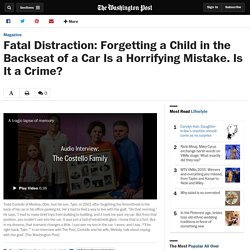 He hunched forward in the sturdy wooden armchair that barely contained him, sobbing softly into tissue after tissue, a leg bouncing nervously under the table. In the first pew of spectators sat his wife, looking stricken, absently twisting her wedding band. The room was a sepulcher. Witnesses spoke softly of events so painful that many lost their composure. When a hospital emergency room nurse described how the defendant had behaved after the police first brought him in, she wept.

The charge in the courtroom was manslaughter, brought by the Commonwealth of Virginia. It was an inexplicable, inexcusable mistake, but was it a crime? At one point, during a recess, Harrison rose unsteadily to his feet, turned to leave the courtroom and saw, as if for the first time, that there were people witnessing his disgrace. The trial would last three days.