The Anatomy of a Search Engine 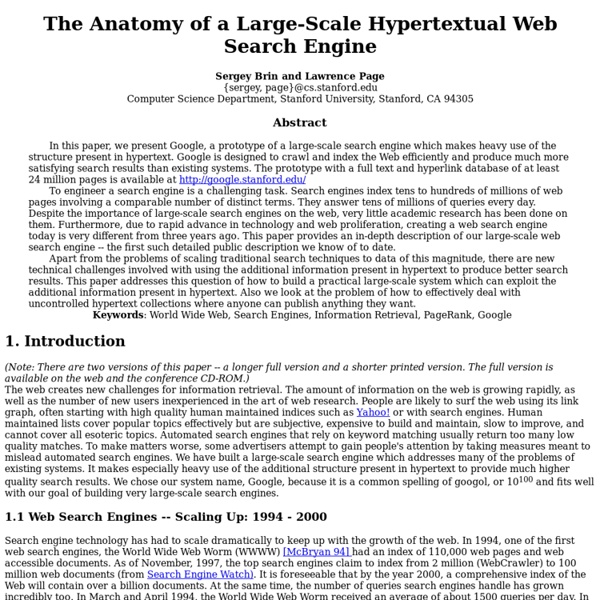 Sergey Brin and Lawrence Page {sergey, page}@cs.stanford.edu Computer Science Department, Stanford University, Stanford, CA 94305 Abstract In this paper, we present Google, a prototype of a large-scale search engine which makes heavy use of the structure present in hypertext. Google is designed to crawl and index the Web efficiently and produce much more satisfying search results than existing systems. 1. (Note: There are two versions of this paper -- a longer full version and a shorter printed version. 1.1 Web Search Engines -- Scaling Up: 1994 - 2000 Search engine technology has had to scale dramatically to keep up with the growth of the web. 1.2. Creating a search engine which scales even to today's web presents many challenges. These tasks are becoming increasingly difficult as the Web grows. 1.3 Design Goals 1.3.1 Improved Search Quality Our main goal is to improve the quality of web search engines. 1.3.2 Academic Search Engine Research 2. 2.1 PageRank: Bringing Order to the Web References

Here's how 5 more schools are innovating and educating Stamford High School/Stamford Public SchoolsMary Raphael George, Library Media SpecialistOne of the school’s top technology initiatives: Collaborating with my colleagues using Google Classroom while accomplishing information literacy goals involving academic research makes me the most proud because it gave teachers and students a newfound energy for the existing technology we were using. Faculty disseminated information to students and assessed student work utilizing new feedback options. Working with my colleagues was a team effort. It took patience as well as a willingness to be open-minded to new possibilities. Burr and Burton AcademyNeil Freebern, Director of Creative ArtsOne of the district’s top technology initiatives: Freebern established what he refers to as a Heterogeneous Blended Learning Environment for many of his classes, as well as within his department. Through the use of technology, teachers are able to offer multiple courses in the same room at the same time.

Facebook will soon rely on Instagram for the majority of its ad revenue growth When Instagram founders Kevin Systrom and Mike Krieger announced last month they were stepping away from Facebook, there was a collective gasp: Instagram’s future was suddenly at risk. So is Facebook’s. So far, Facebook’s acquisition of Instagram has been a total success — one of the biggest of the internet era. The app, which Facebook acquired for $1 billion in 2012, now has more than a billion users and should generate $8 billion to $9 billion in revenue this year, depending on whose estimate you use. Other achievements are harder to measure, like how Instagram reduced Snapchat as a strategic threat by cloning many of its features, and how it gives Facebook a connection to young people. But Instagram isn’t just a nice thing for Facebook to have around.

How Internet Search Engines Work - WebsiteGear About Internet Search Engines Published: Friday, August 20, 2004 About Internet Search Engines The internet contains a vast collection of information, which is spread out in every part of the world on remote web servers. The problem in locating the correct information on the internet led to the creation of search technology, known as the internet search engine. Beautiful Norway Pictures Show Norway As It Really Is - Beautiful For people who live there, it’s just another country, but for those who only travel or visit Norway, it’s an amazing experience. Norway is known to be one of the most beautiful places in the world, with scenes of amazing sunrise hikes or a camping in the snow, this country has spectacular views that would not shame lord of the rings or Narnia. We find these images so beautiful they’re actually inspiring. What do you think? Source: Imgur More from The Awesome Daily

Sci.Electronics.Repair FAQ: Notes on the Troubleshooting and Repair of Microwave Ovens [Mirrors] Contents: 6.19) Arcing in or above oven chamber Care And Feeding of a Search Engine Spider Simply stated a Search Engine Spider is a Computer Program. Most computers have a software program you can use to find files on your computer. The program you use to do this is a basic search function. Search Engines collect data from all over the web. The program Search Engines use is a much more complex program that looks for information stored on websites on the internet connected to each other by links.

Should You Delete Your Business Facebook Page? A business Facebook page is considered one of the must-haves of online marketing. Why in the world would someone not have a Facebook page? Facebook is the world’s largest online network. There are more than 1.35 billion users. Instagram prototypes handing your location history to Facebook This is sure to exacerbate fears that Facebook will further exploit Instagram now that its founders have resigned. Instagram has been spotted prototyping a new privacy setting that would allow it to share your location history with Facebook. That means your exact GPS coordinates collected by Instagram, even when you’re not using the app, would help Facebook to target you with ads and recommend you relevant content. The geo-tagged data would appear to users in their Facebook Profile’s Activity Log, which include creepy daily maps of the places you been. This commingling of data could upset users who want to limit Facebook’s surveillance of their lives. With Facebook installing its former VP of News Feed and close friend of Mark Zuckerberg, Adam Mosseri, as the head of Instagram, some critics have worried that Facebook would attempt to squeeze more value out of Instagram.

What to do before selling or giving away your iPhone, iPad, or iPod touch Use these steps to remove your personal information from a device, even if you don't have it anymore. If you still have your iPhone, iPad, or iPod touch Before you sell, give away, or trade in your device, you should remove your personal information. Drone Apps « Categories « Drone Directory – Find Pro Drone Pilots Drone Manufacturers Training Apps Insurance We have found 2 items matching your search query. Apps for drones, fly safe drone insurance apps, drone safety apps ... Apps for Drones | Commercial Drone Apps | Drone Apps for Enterprise | Data Processing Software WebSPHINX: A Personal, Customizable Web Crawler Contents About WebSPHINX WebSPHINX ( Website-Specific Processors for HTML INformation eXtraction) is a Java class library and interactive development environment for web crawlers. A web crawler (also called a robot or spider) is a program that browses and processes Web pages automatically. WebSPHINX consists of two parts: the Crawler Workbench and the WebSPHINX class library.

You Gave Facebook Your Number For Security. They Used It For Ads. Add “a phone number I never gave Facebook for targeted advertising” to the list of deceptive and invasive ways Facebook makes money off your personal information. Contrary to user expectations and Facebook representatives’ own previous statements, the company has been using contact information that users explicitly provided for security purposes—or that users never provided at all—for targeted advertising. A group of academic researchers from Northeastern University and Princeton University, along with Gizmodo reporters, have used real-world tests to demonstrate how Facebook’s latest deceptive practice works.