The Eight Pillars of Innovation 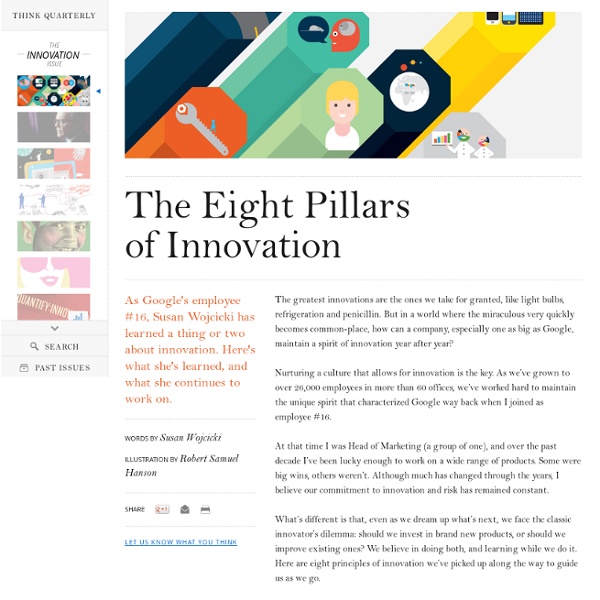 The greatest innovations are the ones we take for granted, like light bulbs, refrigeration and penicillin. But in a world where the miraculous very quickly becomes common-place, how can a company, especially one as big as Google, maintain a spirit of innovation year after year? Nurturing a culture that allows for innovation is the key. As we’ve grown to over 26,000 employees in more than 60 offices, we’ve worked hard to maintain the unique spirit that characterized Google way back when I joined as employee #16. At that time I was Head of Marketing (a group of one), and over the past decade I’ve been lucky enough to work on a wide range of products. Some were big wins, others weren’t. What’s different is that, even as we dream up what’s next, we face the classic innovator’s dilemma: should we invest in brand new products, or should we improve existing ones? Have a mission that matters Work can be more than a job when it stands for something you care about. Think big but start small

Richard Branson on the Art of Brainstorming Q: Are there any techniques that could help me brainstorm? -- Kai Prout A: When I took part in attempts to set speed records for hot air ballooning across the oceans in the '80s and '90s, we got into some sticky situations. For me, the term "brainstorm" always brings back memories of flying a hot air balloon 30,000 feet above the earth into the eye of a very different kind of storm. In those terrifying, exhilarating moments, our team desperately racked our brains, trying to work out how to survive. We’re all marketers now - McKinsey Quarterly - Marketing & Sales - Strategy For the past decade, marketers have been adjusting to a new era of deep customer engagement. They’ve tacked on new functions, such as social-media management; altered processes to better integrate advertising campaigns online, on television, and in print; and added staff with Web expertise to manage the explosion of digital customer data. Yet in our experience, that’s not enough. To truly engage customers for whom “push” advertising is increasingly irrelevant, companies must do more outside the confines of the traditional marketing organization.

Oligopoly An oligopoly is a market form in which a market or industry is dominated by a small number of sellers (oligopolists). Oligopolies can result from various forms of collusion which reduce competition and lead to higher prices for consumers.[1] With few sellers, each oligopolist is likely to be aware of the actions of the others. The decisions of one firm therefore influence and are influenced by the decisions of other firms. Have you tested your strategy lately? - McKinsey Quarterly - Strategy - Strategic Thinking “What’s the next new thing in strategy?” a senior executive recently asked Phil Rosenzweig, a professor at IMD, in Switzerland. His response was surprising for someone whose career is devoted to advancing the state of the art of strategy: “With all respect, I think that’s the wrong question.

Analytically determining of the relative inaccuracy (error) of indirectly measurable variable and dimensionless scale characterising quality of the experiment * / CSJM v.20, n.1 (58), 2012 / Issues / CSJM / Publications / IMCS Authors: K. Kolikov, G. Krastev†, Y. Epitropov, A. CorlatKeywords: Indirectly measurable variable, maximum relative error, dimensionless scale. Abstract 5 Outstanding TED Talks about Creativity According to Sir Ken Robinson, creativity is the " process of having original ideas that have values". Everyone of us is born creative but the milieu where we are brought up and the kind of education we receive have a lot to do with how creative we become as we grow up. In his popular TED talk " Do Schools Kill Creativity " , Robinson argued that students are educated out of creativity.

Computer Science 101 UPDATE: we're doing a live, updated MOOC of this course at stanford-online July-2014 (not this Coursera version). See here: CS101 teaches the essential ideas of Computer Science for a zero-prior-experience audience. Computers can appear very complicated, but in reality, computers work within just a few, simple patterns. CS101 demystifies and brings those patterns to life, which is useful for anyone using computers today. Innovation – The Leadership Soft Skills A summary of the role of leadership and soft skills in innovation. ‘A leader is best when people barely know he exists, when his work is done, his aim fulfilled, they will say: we did it ourselves.’ - Lao Tzu There are a lot of blogs and worthy peer journals, sharing the importance of innovation in business success and survival. We all agree innovation is important, but how do we nurture innovation, as something which is integral to business process, and creates value within an organisation?