Education 3.0 and the Pedagogy (Andragogy, Heutagogy) of Mobile Learning 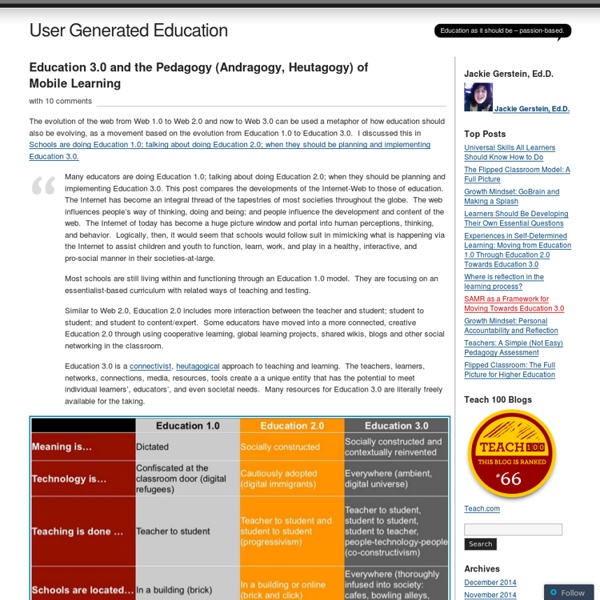 S.I.A.R. - Peeragogy 3 things you should know about Edupunk Open Education Handbook Booksprint On 3rd September 2013 seventeen open education experts came together to begin writing the Open Education Handbook. The handbook is one of the LinkedUp Project deliverables, but the dissemination team have chosen to also make it one of the first activities of the soon to be launched Open Education Working Group. The handbook takes the form of an open, living document and it made sense to start the process through a collaborative effort – in the form of a booksprint. The Book Sprint methodology was started by Adam Hyde at booksprints.net and involves bringing together a group to produce a book in 3-5 days. It was decided to take a less-pressurised and more collaborative approach to writing the Open Education Handbook handbook. Getting started The day began with coffee, biscuits and an opportunity for people to get to know each other and talk about their area of interest in open education. Phil’s talk lead nicely into a warm up exercise based on the P2PU spectrogram activity.

The Art of Slipping in Some Learning The Art of Slipping in Some Learning. Off to the side of Eric Azcuy’s cluttered desk were two products from Nissin Foods: one Cup Noodles and one box of Chow Mein. It looked like lunch, but it was actually the day’s art lesson. The inspiration came from an NPR story Mr. Azcuy had read earlier describing how the design of instant soup cups makes them tip over easily, spilling their hot contents on, and often burning, young eaters. So, Mr. “It’s something relevant,” he said calmly, his black curly hair, dark-rimmed glasses and plaid collared shirt making him appear just a bit hip. The lesson plan was typical for Mr. The attitude has led to projects that include painting a giant periodic table of the elements, creating a mural based on “The Great Gatsby” and the day’s effort at redesigning the Cup Noodles container. Still, Mr. Mr. In other words, this wasn’t just a chance for students to transform a stapler into a five-headed dragon. “The math, it was kind of just snuck in there,” Mr. Mr.

Pearltrees Educators in the United States face not one but two skill gaps - the gap in skills high school seniors have when they start college and the second, when college graduates begin their first job and are not prepared to do the job they were hired for. This week I bookmarked [using Pearltrees] articles that provide a fresh perspective on these problems along with potential solutions. And just how big are these gaps? The First Gap: High School to CollegeSAT® Report: Only 43 Percent of 2012 College-Bound Seniors Are College Ready. We Need more Access to A.P. Rigor is Better. (2011). The Second Gap: College to the WorkforceSkills Gap? Academic Performance on an International LevelA National Report Card, Nicole, Allen (October, 2012) The Atlantic. Also included in report: More teaching is not always better. Innovative Solutions to Education Reform Inventing a New Kind of College: No lecture halls, sports teams or library this college seeks to turn post-secondary education upside down.

Open Course: Social Media & Open Education I will be facilitating an open graduate course this Fall titled EC&I 831: Social Media & Open Education. This will be the 5th time I have taught the course (first time was 2007), and it’s different each time. It looks like I will have about 25 graduate students taking this for credit (which is well over the usual limit), and I’m also inviting anyone out there interested in the experience to participate for free. If you would like to learn more about the course, go to If you’re familiar with the course (from past iterations), you’ll notice that I’ve abandoned the old wiki and moved over to a WordPress site as the ‘central’ space. If you are interested in participating, see the page for non-credit participants. But most of all, my students could use your help. For non-credit students, the course begins on September 20th at 7pm Saskatchewan time, and you’ll find us by clicking on this this Blackboard Collaborate link. Thanks everyone, and I hope to learn with you soon.

Open Science Collaboration Blog · The State of Open Access by Shauna Gordon-McKeon To celebrate Open Access Week last month, we asked people four questions about the state of open access and how it's changing. Here are some in depth answers from two people working on open access: Peter Suber, Director of the Harvard Office for Scholarly Communication and the Harvard Open Access Project, and Elizabeth Silva, associate editor at the Public Library of Science (PLOS). How is your work relevant to the changing landscape of Open Access? What would be a successful outcome of your work in this area? Elizabeth: PLOS is now synonymous with open access publishing, so it’s hard to believe that 10 years ago, when PLOS was founded, most researchers were not even aware that availability of research was a problem. We’re now at an exciting time, where open access in the natural sciences is all but inevitable. Peter: My current job has two parts. To me success would be making OA the default for new research in every field and language.

Google Launches Open Course Builder Google launched an open source course building web application for the growing list of K-12 and big-name universities developing online classes. The barebones website is a lightweight way to bring course material online, track student engagement (with web traffic and surveys), and evaluate performance. “We want to use this launch to show that Google believes it can contribute to technology in education,” says Google’s Director of Research, Peter Norvig. Course-builder came off the back of an experimental Google class, “Power Searching with Google,” which went out to schools across the country to educate students on the more advanced features of Google for online research. Google is hoping that big-name universities, such as Stanford and MIT, who have started to put their courses online for free, will adopt the technology. There are many websites, such as Udemy, that have long offered services for individual users to create (and get paid) for their own classes.

Peer-to-Peer Learning Handbook | Peeragogy.org Wikimedia Foundation American non-profit charitable organization As of 2017[update], the foundation employs over 300 people, with annual revenues in excess of US$109.9 million.[9] María Sefidari is chair of the board.[3] Katherine Maher has been the executive director since March 2016. Goal[edit] The Wikimedia Foundation has the stated goal of developing and maintaining open content, wiki-based projects and providing the full contents of those projects to the public free of charge.[10] Another main objective of the Wikimedia Foundation is political advocacy.[11] History[edit] In 2001, Jimmy Wales, an Internet entrepreneur, and Larry Sanger, an online community organizer and philosophy professor, founded Wikipedia as an Internet encyclopedia to supplement Nupedia. In April 2005, the U.S. On September 25, 2007, the foundation's board gave notice that the operations would be moving to the San Francisco Bay Area. In 2009, the Wikimedia Foundation's headquarters moved to New Montgomery Street. Content projects[edit]