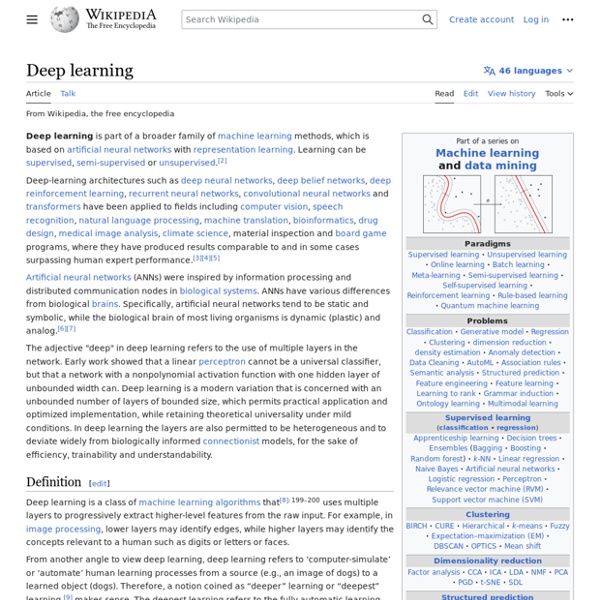 Q-learning For any finite Markov decision process (FMDP), Q-learning finds an optimal policy in the sense of maximizing the expected value of the total reward over any and all successive steps, starting from the current state.[1] Q-learning can identify an optimal action-selection policy for any given FMDP, given infinite exploration time and a partly-random policy.[1] "Q" names the function that the algorithm computes with the maximum expected rewards for an action taken in a given state.[2] Reinforcement learning[edit] Reinforcement learning involves an agent, a set of states , and a set of actions per state. By performing an action , the agent transitions from state to state. The goal of the agent is to maximize its total reward. As an example, consider the process of boarding a train, in which the reward is measured by the negative of the total time spent boarding (alternatively, the cost of boarding the train is equal to the boarding time). 0 seconds wait time + 15 seconds fight time After , where

Machine Learning Project at the University of Waikato in New Zealand Data that lives forever is possible: Japan's Hitachi As Bob Dylan and the Rolling Stones prove, good music lasts a long time; now Japanese hi-tech giant Hitachi says it can last even longer—a few hundred million years at least. The company on Monday unveiled a method of storing digital information on slivers of quartz glass that can endure extreme temperatures and hostile conditions without degrading, almost forever. And for anyone who updated their LP collection onto CD, only to find they then needed to get it all on MP3, a technology that never needs to change might sound appealing. "The volume of data being created every day is exploding, but in terms of keeping it for later generations, we haven't necessarily improved since the days we inscribed things on stones," Hitachi researcher Kazuyoshi Torii said. "The possibility of losing information may actually have increased," he said, noting the life of digital media currently available—CDs and hard drives—is limited to a few decades or a century at most.

Google DeepMind Google DeepMind is a British artificial intelligence company. Founded in 2010 as DeepMind Technologies, it was acquired by Google in 2014. History[edit] 2010 to 2014[edit] In 2010 the start-up was founded by Demis Hassabis, Shane Legg and Mustafa Suleyman.[3][4] Hassabis and Legg first met at UCL's Gatsby Computational Neuroscience Unit.[5] Since then major venture capital firms Horizons Ventures and Founders Fund have invested in the company,[6] as well as entrepreneurs Scott Banister[7] and Elon Musk.[8] Jaan Tallinn was an early investor and an advisor to the company.[9] In 2014, DeepMind received the "Company of the Year" award by Cambridge Computer Laboratory.[10] The company has created a neural network that learns how to play video games in a similar fashion to humans[11] and a neural network that may be able to access an external memory like a conventional Turing machine, resulting in a computer that appears to possibly mimic the short-term memory of the human brain.[12] [...]

Recurrent neural network A recurrent neural network (RNN) is a class of neural network where connections between units form a directed cycle. This creates an internal state of the network which allows it to exhibit dynamic temporal behavior. Unlike feedforward neural networks, RNNs can use their internal memory to process arbitrary sequences of inputs. This makes them applicable to tasks such as unsegmented connected handwriting recognition, where they have achieved the best known results.[1] Architectures[edit] Fully recurrent network[edit] This is the basic architecture developed in the 1980s: a network of neuron-like units, each with a directed connection to every other unit. For supervised learning in discrete time settings, training sequences of real-valued input vectors become sequences of activations of the input nodes, one input vector at a time. Hopfield network[edit] The Hopfield network is of historic interest although it is not a general RNN, as it is not designed to process sequences of patterns.

She's Not Talking About It, But Siri Is Plotting World Domination | Gadget Lab Photo: Alex Washburn/Wired Apple has a vision of a future in which the disembodied voice of Siri is your constant companion. It goes something like this: You arrive home at the end of a long day and plop down on the couch. A beer in one hand, your phone in the other, you say, “Siri, open Netflix and play The IT Crowd.” Midway through the program, you feel a draft. This is where Apple is headed with Siri, as the nascent voice-activated AI spreads from our phones to our desktops, our homes and even our dashboards to become our concierge to the digital world. So far, Apple’s results have been a mixed bag at best. “We spend so much time with our cellphones that having an effective personal assistant could be revolutionary,” said Andrew Ng, director of Stanford University’s AI Lab. To do this, Apple must catch up with, and then overtake, Google, which offers voice search capabilities and natural language understanding far superior to Apple’s. But there are signs of progress.

Critical Thinking: Using Logic and Reason What is the best way to approach or deal with complicated claims? What is the best way to apply logic in order to construct sound arguments? What are logical fallacies in how can they wreck an argument? Beliefs & Reasoning - Differentiating Beliefs from ReasoningIt's important to differentiate between beliefs and reasoning. What is Critical Thinking? Language, Meaning, and CommunicationAlthough it might sound trivial or even irrelevant to bring up such basic matters as language, meaning, and communication, these are the most fundamental components of arguments - even more fundamental than propositions, inferences, and conclusions. Meaning: Denotation and Connotation - Definitions and Concepts in Critical...Understanding the difference between denotation and connotation is important to understanding definitions and how concepts are used. Deductive and Inductive Arguments: What’s the Difference? Argument and LogicWhat is an argument? Do We Have Rational or Rationalized Beliefs?

Artificial neural network An artificial neural network is an interconnected group of nodes, akin to the vast network of neurons in a brain. Here, each circular node represents an artificial neuron and an arrow represents a connection from the output of one neuron to the input of another. For example, a neural network for handwriting recognition is defined by a set of input neurons which may be activated by the pixels of an input image. After being weighted and transformed by a function (determined by the network's designer), the activations of these neurons are then passed on to other neurons. This process is repeated until finally, an output neuron is activated. Like other machine learning methods - systems that learn from data - neural networks have been used to solve a wide variety of tasks that are hard to solve using ordinary rule-based programming, including computer vision and speech recognition. Background[edit] There is no single formal definition of what an artificial neural network is. History[edit] and

Demis Hassabis Demis Hassabis (born 27 July 1976) is a British computer game designer, artificial intelligence programmer, neuroscientist and world-class games player.[4][3][5][6][7][1][8][9][10][11] Education[edit] Career[edit] Recently some of Hassabis' findings and interpretations have been challenged by other researchers. A paper by Larry R. In 2011, he left academia to co-found DeepMind Technologies, a London-based machine learning startup. In January 2014 DeepMind was acquired by Google for a reported £400 million, where Hassabis is now an Engineering Director leading their general AI projects.[12][23][24][25] Awards and honours[edit] Hassabis was elected as a Fellow of the Royal Society of Arts (FRSA) in 2009 for his game design work.[26] Personal life[edit] Hassabis lives in North London with his wife and two sons. References[edit]

Dimensionality reduction In machine learning and statistics, dimensionality reduction or dimension reduction is the process of reducing the number of random variables under consideration,[1] and can be divided into feature selection and feature extraction.[2] Feature selection[edit] Feature extraction[edit] The main linear technique for dimensionality reduction, principal component analysis, performs a linear mapping of the data to a lower-dimensional space in such a way that the variance of the data in the low-dimensional representation is maximized. In practice, the correlation matrix of the data is constructed and the eigenvectors on this matrix are computed. The eigenvectors that correspond to the largest eigenvalues (the principal components) can now be used to reconstruct a large fraction of the variance of the original data. Principal component analysis can be employed in a nonlinear way by means of the kernel trick. Dimension reduction[edit] See also[edit] Notes[edit] Jump up ^ Roweis, S. References[edit]

Can A Computer Finally Pass For Human? “Why not develop music in ways unknown…? If beauty is present, it is present.” That’s Emily Howell talking – a highly creative computer program written in LISP by U.C. Santa Cruz professor David Cope. (While Cope insists he’s a music professor first, “he manages to leverage his knowledge of computer science into some highly sophisticated AI programming.”) Classical musicians refuse to perform Emily’s compositions, and Cope says they believe “the creation of music is innately human, and somehow this computer program was a threat…to that unique human aspect of creation.” The article includes a sample of her music, as intriguing as her haiku-like responses to queries. Share A Field Guide to Critical Thinking Feature James Lett Skeptical Inquirer Volume 14.2, Winter 1990 There are many reasons for the popularity of paranormal beliefs in the United States today, including: the irresponsibility of the mass media, who exploit the public taste for nonsense,the irrationality of the American world-view, which supports such unsupportable claims as life after death and the efficacy of the polygraph, andthe ineffectiveness of public education, which generally fails to teach students the essential skills of critical thinking. As a college professor, I am especially concerned with this third problem. In an attempt to remedy this problem at my college, I've developed an elective course called “Anthropology and the Paranormal.” The six rules of evidential reasoning are my own distillation and simplification of the scientific method. Falsifiability It must be possible to conceive of evidence that would prove the claim false. Additional examples of multiple outs abound in the realm of the paranormal. Logic