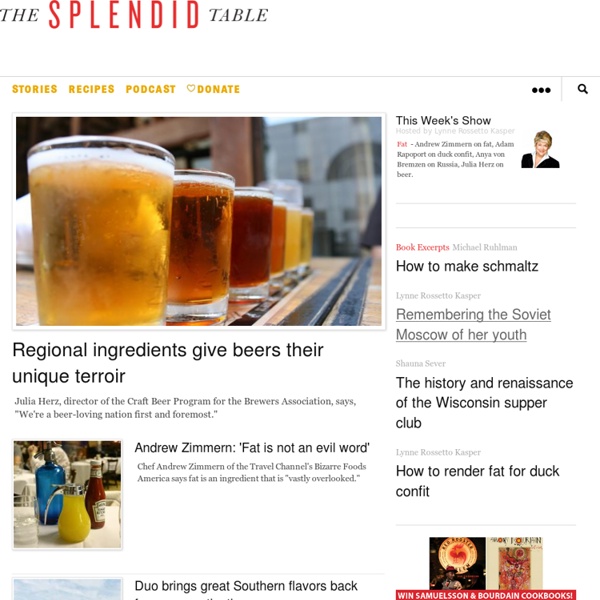 The Splendid Table Recipes: Grains, Flours, Beans Recipes Skip to main content Search form Grains, Flours, Beans Spaghetti and Meatball Pot Pie Remember those meatballs I made for a “special idea” on Friday? Here is that idea, Spaghetti and Meatball Pot Pie. I took the concept and figured if pizza was a good pot pie, then spaghetti and meat balls would be too. This isn't as much a recipe as it is a process. I started by greasing the inside of ramekins (1 cup sized, 3 1/2” in diameter). ERS Charles Darwin and other early evolutionists were fascinated by religious phenomena and how they might be explained from an evolutionary perspective. Nevertheless, evolutionary theory became restricted to the biological sciences and excluded from the study of many human-related subjects for most of the 20th century. Only now is the theory being used to explain all aspects of humanity in addition to the rest of life.

Miracle Berry's Sour-Sweet Mystery Cracked By Mark Brown, Wired UK Popping a squishy red miracle berry into your mouth is almost like hacking your taste buds. For up to an hour, the juices coat your tongue and previously sour foods like lemon and vinegar magically taste deliciously sweet. [partner id="wireduk" align="right"]The berry and its plant (Richardella dulcifica) grows in West Africa.

Apple Pies & Jo In the Kitchen I know, I’ve made a few pies lately. But see how these are different? Look at how adorable these are! An experiment in community.... - The World Cafe Community An interesting experiment has been taking place in Melbourne, Australia around the creation of generative spaces for strengthening neighbourhoods and tackling challenging issues. The experiment was started, perhaps rather unexpectedly, by a church but most decidedly it was not an attempt to try draw people “into the institution.” Instead it asked how might we create more neighbourhood spaces for authentic engagement, person to person? It worked on the assumption that we can co-create a different type of world if we start with local conversations around issues that people care about. Based on Margaret Wheatley’s call to gather people around us who share our passion on an issue and get talking, Adrian Pyle (the Uniting Church in Australia’s Director of Relationships Innovation), convened a gathering of about twenty people he’d met who had a deep and genuine commitment to helping sustain healthy neighbourhoods.

Miracle fruit The berry itself has a low sugar content[7] and a mildly sweet tang. It contains a glycoprotein molecule, with some trailing carbohydrate chains, called miraculin.[8][9] When the fleshy part of the fruit is eaten, this molecule binds to the tongue's taste buds, causing sour foods to taste sweet. At neutral pH, miraculin binds and blocks the receptors, but at low pH (resulting from ingestion of sour foods) miraculin binds protons and becomes able to activate the sweet receptors, resulting in the perception of sweet taste.[10] This effect lasts until the protein is washed away by saliva (up to about 60 minutes).[11] The names miracle fruit and miracle berry are shared by Gymnema sylvestre and Thaumatococcus daniellii,[2] which are two other species of plant used to alter the perceived sweetness of foods. History[edit] For a time in the 1970s, US dieters could purchase a pill form of miraculin.[15] The idea of the "miraculin party"[15] was conceived then.