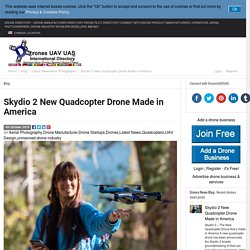 Twitter took phone numbers users gave for account security and used them to target ads. In July, the Federal Trade Commission (FTC) said Facebook had broken the law when it engaged in a similar practice. 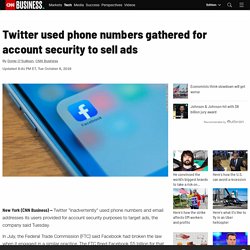 The FTC fined Facebook $5 billion for that and a litany of other instances where it mishandled user data. Twitter users are asked to provide information like their phone number to help secure their account through services such as two-factor authentication. Why macOS Catalina is breaking so many apps, and what to do about it. Apple’s latest Mac update, macOS Catalina, was released earlier this week, and with it came a flurry of complications both minor and major. 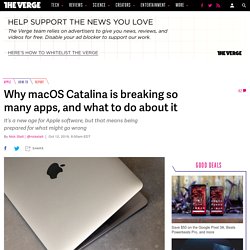 For one, this update is the first for Apple to drop 32-bit application support, which is causing all sorts of headaches for users of smaller apps, plug-ins, and other software that may not be updated for quite some time or may have been created by a company that no longer exists. There are also a fair number of other issues with Catalina, like Adobe software incompatibility problems and unforeseen hurdles related to the removal of iTunes. That leads us to a series of important questions for Mac users who may be at risk of having important workflows disrupted by Catalina. What exactly might go wrong if you do upgrade? □ These robotic tiles can track your every step to create an immersive VR experience via. Sushi car #DigitalTransformation #DigitalMarketing #Ai #iA #ia #IntelligenceArtificielle #ArtificialIntelligence #BigData #dataviz #MachineLearning #DataLake #DeepLearning @helene_wpli @AmandaRay02 @EliseQuevedo @_SChmielewski @Nathealings… Boom - Supersonic Passenger Airplanes.

Alaska super cub 10 foot landing 10 foot take off. Learn the history of Kolmanskop, a Namibian ghost town covered in sand. Search Engines Search Engines Search Engines. Facebook Shadow Profiles: What You Need to Know. A new kind of Incognito. The Natter Was A Rocket-Based Wooden Aircraft By Germany. Towards the end of World War II, an effort was made by Germany to take down the American bombers that were wreaking havoc in Germany. 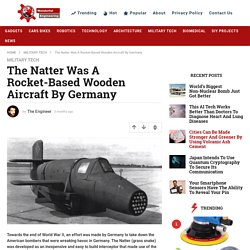 Gibiru – Protecting your privacy since 2009. Pyr. Fire Aviation - News & commentary about aerial firefighting, air tankers, and helicopters. Search Marketing: Four Search Trends that Made Waves in 2017. AI Series: What is Predictive Marketing & How Sentiment Unlocks It for You - NetBase. The simplest definition of predictive marketing is fairly obvious – predicting future consumer wants and needs to ensure you’re always delivering and staying ahead of competitors. And here’s a more clinical definition: “Predictive marketing is the strategic use of existing customer datasets to identify patterns and anticipate future customer behaviors, sales trends and marketing outcomes.”

PRISM (surveillance program) Below are a number of slides released by Edward Snowden showing the operation and processes behind the PRISM program. 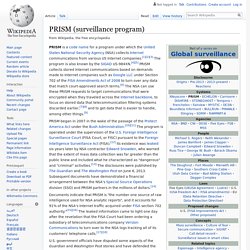 Facebook Marketing: How To Get Page Likes, Engagement & Blog Traffic. Everyone is looking for the formula on how to break through and get more blog traffic and engagement from Facebook. 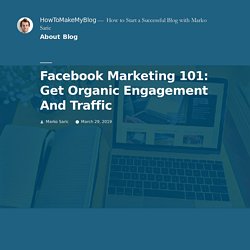 This is your Facebook marketing game plan for how you can get your blog content in more Facebook news feeds. Facebook is the holy grail of traffic for websites. Almost 80% of all referral traffic to the biggest websites in the world comes from Facebook and Google. How Google is tracking you, and how to avoid it. Infiniti Tracking: Vehicle Tracking Systems & Dash Cams. Planes of Fame Air Museum. The Planes of Fame Air Museum collection now numbers close to 160 aircraft. 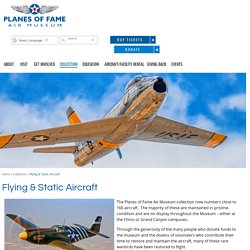 The majority of these are maintained in pristine condition and are on display throughout the Museum – either at the Chino or Grand Canyon campuses. Through the generosity of the many people who donate funds to the museum and the dozens of volunteers who contribute their time to restore and maintain the aircraft, many of these rare warbirds have been restored to flight.

Facebook will soon rely on Instagram for the majority of its ad revenue growth. When Instagram founders Kevin Systrom and Mike Krieger announced last month they were stepping away from Facebook, there was a collective gasp: Instagram’s future was suddenly at risk. 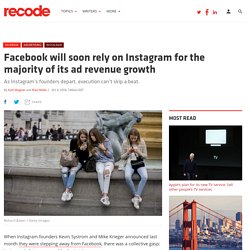 So is Facebook’s. So far, Facebook’s acquisition of Instagram has been a total success — one of the biggest of the internet era. The app, which Facebook acquired for $1 billion in 2012, now has more than a billion users and should generate $8 billion to $9 billion in revenue this year, depending on whose estimate you use. Quitting the five tech giants: Could you really flee Facebook? Why social media fatigue is spreadingDan Patterson and Jason Hiner discuss how early adopters of social media are turning away from it, and what that could mean for the future of Facebook, Twitter, and other social platforms. 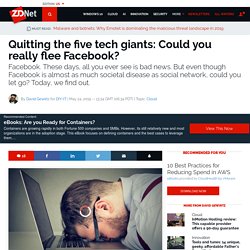 Welcome to Day 2 of our series about quitting the Big Five. Yesterday, we looked at whether I could pass up on all that Amazon has to offer. Today, it's Facebook. The full series: Strewth! Apoplectic Aussies threaten to blast noisy Google delivery drones out of the sky. Video Google has just completed a year-long test program for a drone delivery system in Australia – and has applied to launch the world's first commercial delivery drone operation this summer, Down Under. 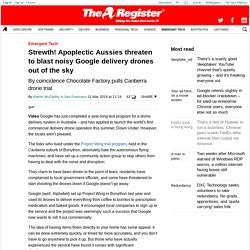 However, the locals aren't pleased. The folks who lived under the Project Wing trial program, held in the Canberra suburb of Bonython, absolutely hate the autonomous flying machines, and have set up a community action group to stop others from having to deal with the noise and disruption. They claim to have been driven to the point of tears, residents have complained to local government officials, and some have threatened to start shooting the drones down if Google doesn't go away. Google (well, Alphabet) set up Project Wing in Bonython last year and used its drones to deliver everything from coffee to burritos to prescription medication and baked goods. "Noise is the number one issue from the drones," says the Boynthon Against Drones (BAD) group that has grown up to oppose the plans. MI9 nos 1 to 499. Hoard of more than 550 rare gold and silver 14th century coins are worth an estimated £150,000.

A 14th century hoard containing more than 550 rare gold and silver coins that's potentially worth £150,000 ($195,000) has been discovered in Buckinghamshire. The haul includes 12 extremely rare full gold coins from the time of the Black Death and is thought to be one of the biggest hoards from the UK in the last decade. The men who found it were four amateur detectorists taking part in a local metal detector rally. Drone Apps « Categories « Drone Directory – Find Pro Drone Pilots Drone Manufacturers Training Apps Insurance.

We have found 2 items matching your search query. Apps for drones, fly safe drone insurance apps, drone safety apps ... Apps for Drones | Commercial Drone Apps | Drone Apps for Enterprise | Data Processing Software Best drone apps list of drone flight apps and drone photography apps for serious drone pilots. Browse the drone apps directory to find best apps for drones. Fitness Finder App - Find local fitness and exercise classes with the GTme app! Amazon and Facebook Reportedly Had a Secret Data-Sharing Agreement, and It Explains So Much. Instagram prototypes handing your location history to Facebook. This is sure to exacerbate fears that Facebook will further exploit Instagram now that its founders have resigned. Instagram has been spotted prototyping a new privacy setting that would allow it to share your location history with Facebook.

That means your exact GPS coordinates collected by Instagram, even when you’re not using the app, would help Facebook to target you with ads and recommend you relevant content. The geo-tagged data would appear to users in their Facebook Profile’s Activity Log, which include creepy daily maps of the places you been. Sci.Electronics.Repair FAQ: Notes on the Troubleshooting and Repair of Microwave Ovens. Aircraft Flight Schedule. The Anatomy of a Search Engine.