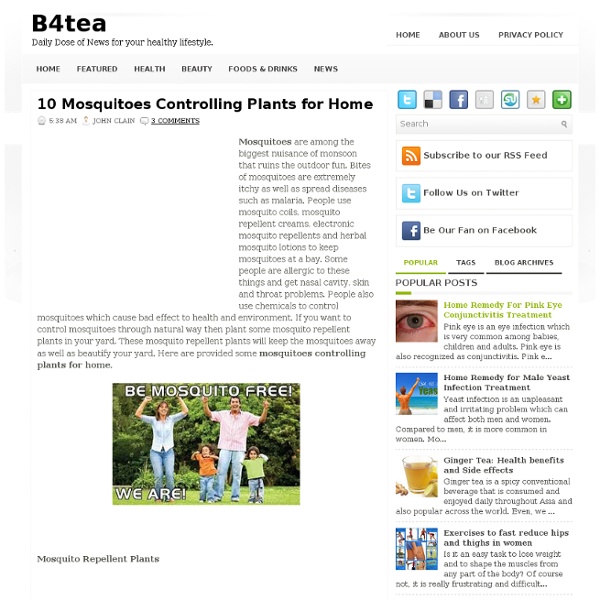 Susun Weed, Herbalist Amazonian shamanism is, among other things, a form of herbal medicine. People who focus on the healing and transformative powers of ayahuasca may sometimes overlook the sheer size of the shamanic pharmacopoeia and the role that plant medicines play in healing. But to understand curanderismo in the Amazon, we have to understand these healing plants — their selection, preparation, indications, and application. My plant teacher doña María Tuesta Flores knew hundreds of plant medicines.

Biodynamic Organic Farming - What is it? Share by Shauna Willetts – Eco 18 Organic, pesticide free, GMO free and parabens. These are some common terms heard, or seen on a day-to-day basis, but what about the term “biodynamic organic farming”? It sounds pretty scary, doesn’t it? The Best Home Remedies to Get Rid of Spider Veins If one day you notice web-like formations on your legs or ankles, don’t panic. Spider veins might be unsightly, but they are usually harmless and often disappear on their own. They can however cause some uncomfortable sensations, like itching or burning, so many strive to get rid of them. Luckily, there are numerous things you can try at home to diminish and prevent the spidery formations.

7 Ways To Get Rid of Ants Naturally It’s a compliment, I’m sure . . . The way ants are descending on my kitchen. The sticky sweet smell of homemade strawberry jam is irresistible if I do say so myself. The 7 Deadly Homemade Weed Killers “And the weeds of the garden shall be visited upon the gardener.” I can certainly think of the 7+ weedy sins of the garden but knowing how to cleanse my garden of these weeds is even better. Especially if it can be done cheaply and with household items. Murdering weeds is a fun past time. So, for your reading enjoyment, here are The 7 Deadly Homemade Weed Killers, guaranteed to help you eradicate the weeds you find in your garden.

In Praise of Art: Abandoned Church Colorfully Transformed by Okuda Abandoned and dilapidated not so long ago, a neglected church in Morocco has become a vivid landmark decorated from the ground to the roof with colorful geometric illustrations by the street artist Okuda San Miguel. The project ’11 Mirages to Freedom’ wraps the entire facade of the structure in brilliant rainbow-hued paintings against a sunny yellow backdrop, making symbolic visual use of the architectural elements like the windows. Rather than just covering the abandoned church with murals, the renowned Spanish artist created an interactive display honoring its past, its structural integrity, the beauty of its lines and shapes. The name of the piece comes from the building’s eleven faces. Bars covering the windows are transformed into bird cages, the windows themselves into hats and crowns.

When Dreams “Bleed” Through I had one of the stranger experiences of my life this morning, and that’s saying something, given my unusual life! David’s alarm went off at 4:45 as usual, and, since we had both gone to bed early and slept through the night, I felt fully rested, too. After he got out of bed, I stretched my back a bit and fully expected to join him in the kitchen a few minutes later. The next thing I knew, I was in the middle of a lucid dream, wandering around my garden in the middle of snowy January. At first, everything seemed similar enough to “reality” that my dream self thought I was still awake and just thinking about my garden. But then I looked more closely and noticed some unusual things.

Read Lorde’s Beautiful Tribute to David Bowie In the wake of David Bowie’s death, everyone from Madonna to Conan O’Brien to astronaut Chris Hadfield have shared tributes, memories and messages of mourning. The latest celebrity to share some thoughts is Lorde, who admitted that it “feels kind of garish to talk about oneself at a time like this, when the thing that has happened is so distinctly world-sized.” But that’s because he was just so personally influential to so many people, she explains in a meditative Facebook post. “He was a piece of bright pleated silk we could stretch out or fold up small inside ourselves when we needed to.” MORE: 4 Ways David Bowie Influenced Musicians Today

How Plants Help Each Other Grow By Near-Telepathic Communication Michael Forrester, Prevent DiseaseWaking Times Plants have scientifically been show to draw alternative sources of energy from other plants. Plants influence each other in many ways and they communicate through “nanomechanical oscillations” vibrations on the tiniest atomic or molecular scale or as close as you can get to telepathic communication. Members of Professor Dr. Olaf Kruse’s biological research team have previously shown that green algae not only engages in photosynthesis, but also has an alternative source of energy: it can draw it from other plants.

How to Separate a Palm Clump There are several species of palm. They are grown through either native propagation or through reproduction and human cultivation. A palm may yield several individual plants.