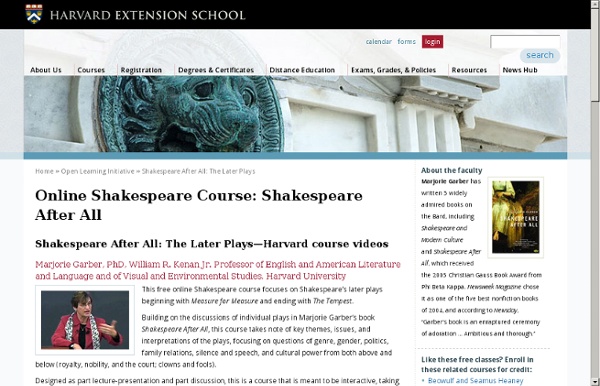 Marjorie Garber, PhD, William R. Kenan Jr. Professor of English and American Literature and Language and of Visual and Environmental Studies, Harvard University This free online Shakespeare course focuses on Shakespeare’s later plays beginning with Measure for Measure and ending with The Tempest. Building on the discussions of individual plays in Marjorie Garber’s book Shakespeare After All, this course takes note of key themes, issues, and interpretations of the plays, focusing on questions of genre, gender, politics, family relations, silence and speech, and cultural power from both above and below (royalty, nobility, and the court; clowns and fools). Designed as part lecture-presentation and part discussion, this is a course that is meant to be interactive, taking up topics generated by students as well as by the instructor. The lecture videos The Quicktime and MP3 formats are available for download, or you can play the Flash version directly. Introduction Troilus and Cressida Othello

What Shakespeare Sounded Like to Shakespeare: Reconstructing the Bard’s Original Pronunciation What did Shakespeare’s English sound like to Shakespeare? To his audience? And how can we know such a thing as the phonetic character of the language spoken 400 years ago? Shakespeare’s English is called by scholars Early Modern English (not, as many students say, “Old English,” an entirely different, and much older language). 1. 2. 3. Not everyone agrees on what Shakespeare's OP might have sounded like. You can hear an example of this kind of OP in the recording from Romeo and Juliet above. Whatever the conjecture, scholars tend to use the same set of criteria David Crystal outlines. If there's something about this accent, rather than it being difficult or more difficult for people to understand ... it has flecks of nearly every regional U.K. For more on this subject, don't miss this related post: Hear What Hamlet, Richard III & King Lear Sounded Like in Shakespeare’s Original Pronunciation. Follow Open Culture on Facebook and Twitter and share intelligent media with your friends.

The Best Music for Writing, Reading, and Studying – StudySuccessful | Living a successful college life This is a guest post by the writing team of BusinessInsuance, if you would like to feature a guest post send me an email! I know. Not everyone prefers listening to music while studying or reading or writing or creating art or whatever. But I think most of us can agree that it’s nice to have music around for activities like these. They can help set a pace for your project, break up the monotony, and (in their greater moments) inspire us. Sigur Rós What music is better for working and proving something of yourself than an epic dream-like post-rock band from Iceland that uses a hybrid of Icelandic and English and bowstrings on their guitars? Most of Sigur Rós’ albums are great for any quiet creative or knowledge work, but in particular, Takk…, Agaetis Byrjun, and (). Do Make Say Think While Do Make Say Think (DMST) falls under the post-rock genre, it sounds quite different than most post-rock bands. The Field Yo La Tengo Some of you may be thinking, “Yo La Tengo has lyrics. Flying Lotus Battles

Shakespeare in eleven steps 1. Begin early.The Misses M-mv (now fifteen and seventeen) met the bard in Kenneth Branagh's Henry V ("O Kate! Nice customs curtsey to great kings"), but they fell in love with him (yes, at six and eight) during a Chicago Shakespeare Theater (CST) production of A Midsummer Night's Dream. A rappin' Puck. A show-stealing Bottom. The grace and wonder of that stage. They became hooked -- for life. (On the other hand, their older brother met and became hooked on Will during the same CST production (staged a few years earlier) of Dream but didn't fall in love until a few months later, when he watched Julius Caesar, with Jason Robbards as Brutus and Charlton Heston as Mark Antony.) 2. 3. 4. 5. 6. 7. 8. ■ Asimov, Isaac. 9. 10. And your older students? For example, eight years ago... And last year... From Harold Bloom: Bardolatry, the worship of Shakespeare, ought to be even more a secular religion than it already is. What we've covered in the last few years:

Need Some Motivation Right Now? Read This IMMEDIATELY If you’re in desperate need of some motivation, we’re going to fix that problem, right here, right now. Prepare yourself. WARNING: I’m going to swear and yell a little in this post. Desperate times call for desperate measures. You said you needed motivation. I’m going to do what needs to be done to get your ass in gear. If this isn’t the kind of motivation you need, leave now. Alright. Here goes. Do you want some motherfucking motivation right now? I SAID, do you want some MOTHERFUCKING MOTIVATION RIGHT NOW? Do you want to get some seriously useful shit done today? Do you want to get off your ass and start producing instead of wallowing in despair, depression, self pity, fear, doubt or whatever is holding you back? Are you sick of not getting anything done? Let’s DO THIS. The point of this exercise is to give you motivation to do something right now. Follow the steps below carefully. 1. The world doesn’t care. We all face obstacles. Did you catch that? Let me say it again. We all face obstacles. 2.

An infographic that keeps track of all of Shakespeare's deaths for you I remember watching Titus. Damn uncomfortable movie. SExpand But visually stunning. Still one of my favorite opening scenes. The kid is playing war with his toys and is delivered to a stadium where real soldiers march in like clockwork toys. Oh, hey, don't get me wrong. It's just that Shakespeare's goal was to write a disturbing and tragical play that the movie succeeded in accomplishing to the degree that it made me uncomfortable. P.S. : Really? It's what you get for jumping in a time machine and coming to the future with your archaic English vocabulary. Assuming by archaic, you mean educated, and by educated you mean graduated 6th grade, then yes. One of my FAVORITE adaptations of my FAVORITE Shakespeare play.

Early Modern English Prior to and following the accession of James I to the English throne in 1603 the emerging English standard began to influence the spoken and written Middle Scots of Scotland. Modern readers of English are generally able to understand texts written in the late phase of the Early Modern English period (e.g. the first edition of the King James Bible and the works of William Shakespeare), while texts from the earlier phase (such as Le Morte d'Arthur) may present more difficulties. The Early Modern English of the early 17th century forms the base of the grammatical and orthographical conventions that survive in Modern English. History[edit] English Renaissance[edit] Transition from Middle English[edit] The change from Middle English to Early Modern English was not just a matter of vocabulary or pronunciation changing; it was the beginning of a new era in the history of English. Tudor period (1485–1603), English Renaissance Henry VIII[edit] Elizabethan English[edit] Elizabethan era (1558–1603)

Book-A-Minute Classics Got another book report to do? English teachers have the inconsiderate habit of assigning mammoth-sized works of literature to read and then actually expecting you to do it. This wouldn't be so bad except that invariably the requisite reading is as boring as fly fishing in an empty lake. "That's nice," you say, "but I don't believe you." Latest additions: 4/6/12 Little Women by Louisa May Alcott. And, on Book-A-Minute SF/F... If you liked Book-A-Minute Classics, try our other Book-A-Minute pages: And try our companion site: RinkWorks Book-A-Minute Classics is a RinkWorks production. Talk Back Talk to us! Legalese Titles and trademarks are the property of their owners.