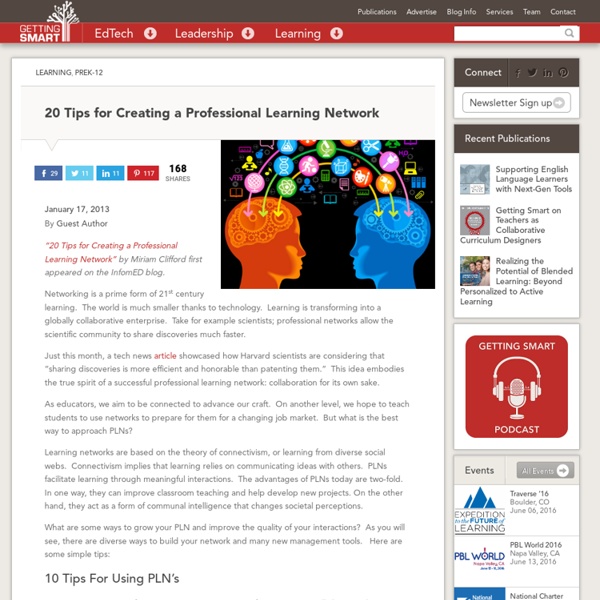 “20 Tips for Creating a Professional Learning Network” by Miriam Clifford first appeared on the InfomED blog. Networking is a prime form of 21st century learning. The world is much smaller thanks to technology. Learning is transforming into a globally collaborative enterprise. Take for example scientists; professional networks allow the scientific community to share discoveries much faster. Just this month, a tech news article showcased how Harvard scientists are considering that “sharing discoveries is more efficient and honorable than patenting them.” As educators, we aim to be connected to advance our craft. Learning networks are based on the theory of connectivism, or learning from diverse social webs. What are some ways to grow your PLN and improve the quality of your interactions? 10 Tips For Using PLN’s Keep the spirit of collaboration as your driving force. 10 Tools & Strategies for Establishing a Productive PLN Use Diigo, Evernote, Pocket, or Delicious to bookmark links.

40 Simple Ways To Use A Smartphone In The Classroom So many ruminations on what smartphone technologies offer the wired classroom begin with some permutation of how, at first, smartphones are often the bane of teachers’ existence because they cause disruptions. This isn’t one of those ruminations. Let’s just go straight to the suggestions, shall we? Use educational apps:One of the simplest strategies for engaging students using smartphones involves taking advantage of the thousands of educational apps as supplements.Create educational apps:After familiarizing kiddos with properly navigating smartphone apps, challenge some of the more tech-oriented ones to design and develop their own; Stanford already offers an open-source class on the subject!Scavenger hunts:Smartphone scavenger hunts have proven a popular pastime for technophiles, and teachers have been known to use them to provide interactive lessons about everything from natural history to nature. It’s an easy concept to adapt!

Human-Centered Design Toolkit For years, businesses have used human-centered design to develop innovative solutions. Why not apply the same approach to overcome challenges in the nonprofit world? This project, funded by International Development Enterprise (IDE) as part of a grant from the Bill & Melinda Gates Foundation, sought to provide NGOs and social enterprises with the tools to do just that. What Does Google+ Mean for Education I became a Google+ user this week and I like it. From what I can tell it lets you do pretty much everything Facebook lets you do with some bonuses including being able to edit your status updates and comments and that you can select who the feed goes to via the circle(s) in which you share your updates. The circles I'm using are colleagues, co-workers, GTA, friends, family, volleyball. The status updates still don't have a feature which I really want: nesting of comments. Is that really so hard??? It does let you tag people in your status which I find useful.

Top Ten Web Tools of 2012 I did mean to post this back at the beginning of January, but missed my own deadline. However I have found my previous top tens from 2008, 2009, 2010 and 2011 useful so decided to get this article done. This is the fifth time I have done this, it covers the web tools I use on a regular basis and it’s those that make a difference to the way that I work. These are not necessarily tools that I see as important for learning technologies, no these are the tools I use. This is an e-learning blog and I should really mention Moodle, I use Moodle everyday as part of my day job, however I see this more as an institutional service rather than a web tool. I use it every day, but in a management perspective, rarely if ever, use it myself for the purpose it is intended for.

Augmented eTwinning Reality - studio_augusto On the website The Teacher Garden there is a wide variety of ways to use QR codes in the classroom, such as managing library materials, writing prompts, assessing students, flipping the classroom and making lessons interactive, among many others. All this activities have been done by teachers of different subjects. In the blog post Interactive Bulletin Boards, third-grade teacher Terri Eichholz explains how she used QR codes in her classroom and engaged students and teachers from other classes in her project. She put her students' artwork on a bulleting board and placed a QR code on each piece. The QR code led the reader to an audio file with students reading their poems.

12 Principles for Responding to Negative Online Comments Due to convenience, the opportunity to receive a direct response and the potential to kick up a fuss when not treated as they expect, customers are turning to social media for customer service and other product and service-related support rather than dealing with call centres. Despite this, a recent study shows that the top Singaporean telecoms operators together receive an average 1,700 negative customer comments a day via social media. Such volume requires dedicated teams to pick through the debris and assess which complaints should be answered and how. Singtel’s Facebook page, for instance, is testament to customers’ frustrations with what they see as the company’s poor 3G coverage, high costs and inferior customer service, to the extent that even the most anodyne promotion is belted with a slew of unrelated moans. Yet very few of these complaints are responded to.

3 Steps to Creating an Awesome Virtual Museum in Class You're spending an afternoon browsing the exhibits at an art museum. If you're anything like me, you'd probably appreciate the art a lot more if you could bring someone along that could explain the history and nuances of the pieces on display. Now imagine pointing a device at the painting and seeing it morph into a dynamic video giving you all the information you wanted about the art.

Design for Social Impact Workbook and Toolkit From climate change to health care systems, The Rockefeller Foundation has brokered partnerships and nurtured innovation for people across the world, with a focus on enabling individuals, institutions, and communities to build better lives and futures. Looking to send a call to action to the design industry, The Rockefeller Foundation partnered with IDEO to engage in its Initiative on Accelerating Innovation for Development, and as a pilot study for connecting design firms to the social sector. Early in the program, IDEO discovered a complex set of challenges facing both industries: The social sector was unfamiliar with the practices and protocol of the design industry, while many design firms balance the desire to work in the social sector with the need to be profitable. To unpack and understand these challenges, IDEO participated in 143 stakeholder interviews representing different funders, implementers, thinkers, consultants, and design firms.

A Step-By-Step Guide To Keeping Students Focused While Using Technology One of the issues that crops up in a lot of classrooms that are stocked up with tablets and other devices is that students often vary off their path of productivity. Maybe they’re googling things they shouldn’t be when they’re supposed to be researching something in particular, or maybe they’re checking out YouTube when they should be working on a group project. Since keeping students on track is not always easy, sometimes the digital horse blinders need to be put on.

True, the key element are people who believe in network and people who are committed to the idea of networked learning. And maybe the most important is to to be motivated to learn :-) Maybe the challenge is in the lack of motivation to learn :-) by beatajg Feb 24

Very good article. I found new sources of knowlegde thanks to it. Sadly, the important part of building a quality e-learning network is finding the right people, and sometimes it's a big challenge. by dagensmedia Feb 24