Where to live in the Algarve, Portugal! Photos from Anna Ellis's post. The Strangest Animals On Earth Make You Believe "Supernatural Powers" Are Real - Science Ping. Not only having an odd shape, these animals also possess extraordinary abilities which are difficult for humans to have. 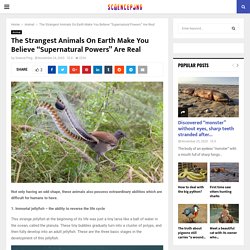 Photos from Niroshan Hemantha's post in CURIEUX DE NATURE & JARDIN. Rats Taught To Play Hide-And-Seek, They Actually Giggled And Jumped For Joy. What Happens When Animals Hibernate? From a young age, we've been taught that many mammals, such as bears, squirrels, chipmunks, groundhogs, and even bats hibernate for the winter. 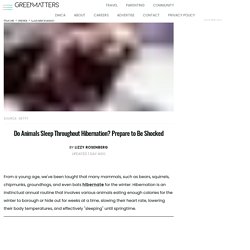 Hibernation is an instinctual annual routine that involves various animals eating enough calories for the winter to borough or hide out for weeks at a time, slowing their heart rate, lowering their body temperatures, and effectively "sleeping" until springtime. A recent TikTok video, however, has shocked many regarding something they thought they knew about, stating that not all animals sleep for the duration fo the winter. So really, what happens when animals hibernate? We're investigating this matter, to get to the bottom of it ASAP. A viral TikTok video about hibernation is making people question everything they've ever known. Great News! Scientists Discover Two New Marsupial Species in Australia. It’s safe to say that 2020 has been an absolutely bruising year from the start, and nowhere has this been more true than in Australia, where massive bushfires killed or displaced some 3 billion animals in one of the most vicious wildlife disasters in modern history. 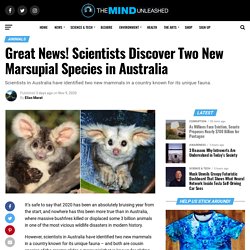 However, scientists in Australia have identified two new mammals in a country known for its unique fauna – and both are cousin species of the greater glider, a marsupial that is known for gliding from tree to tree and is known for its expressive eyes, large ears, and long furry tails. While the glider had previously been classified as a single species, a new study published in the journal Scientific Reports has found that it was actually three distinct species that also live in northern and central Australia, far beyond the southern parts of the country where the marsupial was known to dwell.

(3) Facebook. 20 Unique Phenomena Proving That Mother Nature Always Has Something To Teach Us. Socrates said the only thing I know is that I know nothing. 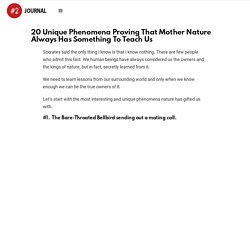 There are few people who admit this fact. We human beings have always considered us the owners and the kings of nature, but in fact, secretly learned from it. We need to learn lessons from our surrounding world and only when we know enough we can be the true owners of it. Let’s start with the most interesting and unique phenomena nature has gifted us with. #1. . #2. The Finalists Of The 2020 Comedy Wildlife Photography Awards. Menu Search. 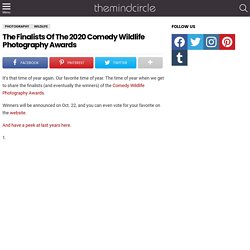 Intimate Animal Portraits Capture Unique Quirks and Personalities of Cats, Dogs, and Horses. Photographer Robert Bahou has always wanted pierce through the cuteness and capture what's really going on in an animal's mind. 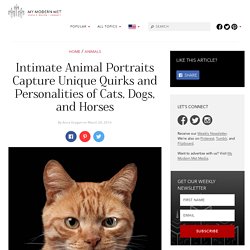 “The idea for this project has been to capture close and telling portraits of the animals we are most familiar with, in an attempt to cast a fresh but honest gaze their way,” the photographer tells us in an email. “I've avoided all distraction by limiting the photographs to medium shots with a black background, and I have purposely avoided humor as a selling point. Despite all the cameras we point at cats and dogs (and sometimes horses), we rarely attempt to capture an intimate moment of character, or personality.

Animal Adventures. 18 Photos Prove Capybara Can Befriend Every Other Species. □□ - Julia Ann Watson. This animal has the biggest ears on Earth (relative to size) BrightVibes. All photos come directly out of the lens. 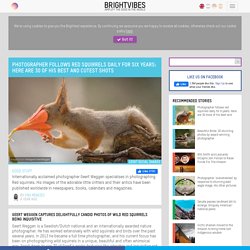 There is no Photoshop used to bring in new elements. Weggen built an outdoor studio near his kitchen window. Using a bit of food, usually edible seeds or nuts, to lure the squirrels, the studio allows him to capture these cute photos from the comfort of his own home. Thanks to the various props and sets he created, Geert’s squirrels can be seen whispering to mushrooms, putting on the kettle and getting some work done in the garden. The studio is conveniently placed one metre above the ground and connected to Geert’s kitchen window three metres away, which enables him to photograph the visiting critters at eye-level. A partial roof allows the use of a flash and additional lighting, remotely operated, and a big reflector hanging in a nearby tree helps with the fill light.

This Weird Echidna Is The Result of One of The Best Fire Survival Tactics We've Heard. Echidnas are one of Australia's cutest and weirdest animals. 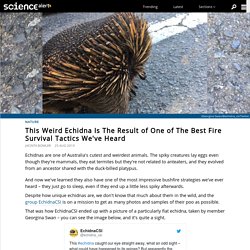 The spiky creatures lay eggs even though they're mammals, they eat termites but they're not related to anteaters, and they evolved from an ancestor shared with the duck-billed platypus. And now we've learned they also have one of the most impressive bushfire strategies we've ever heard – they just go to sleep, even if they end up a little less spiky afterwards. (3) Facebook. (1) LIBERTYN.eu - Posts. Quokkas Are the ‘World’s Happiest Animal’ and We Have The Proof. Have you heard of quokkas before? 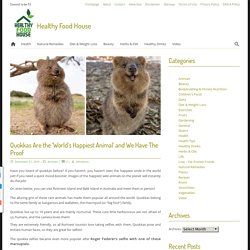 If you haven’t, you haven’t seen the happiest smile in the world yet! If you need a quick mood-booster, images of the happiest wild animals on the planet will instantly do the job! Or, even better, you can visit Rottnest Island and Bald Island in Australia and meet them in person! (8) Facebook. Vermont Wildlife Trail Cam Captures Opossum Pulling Ticks Off A Deer's Face. We’ve heard that opossums eat up to 5,000 ticks a week, but how do they do it? 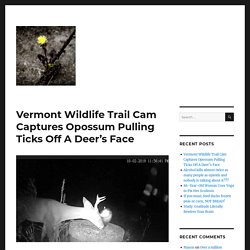 But the opossums groom them off and kill them in the process of the tick wandering around trying to find a place to feed.” This picture caught on a trail cam by the Vermont Wildlife Coalition shows another way. During the dry season, tick infestations are at their worst, sometimes killing young deer. People Share Mindblowing Pairs Of Animals That Look Similar But Are Genetically Incompatible. For a really long time, biologists tried to unwrap the evolutionary history of various animals to figure out how they are related to one another. They have taken a seemingly logical course — to classify animals according to their morphological characteristics and fossil records. Thus, many similarly looking animals were presumed to have come from the same ancestors. Vinnarna i humoristisk naturfototävling.

20 hilarious photos of animals in the wild. 35 Adorable Pics Of Harvest Mice Living Their Little Lives. Mice are strange and interesting little creatures, but there are often people who are scared of them and cannot perceive them in a cute way. However, Dean Mason is a 53-year-old photographer from Dorset, United Kingdom, who has managed to capture adorable photos of harvest mice living their little lives. A harvest mouse usually lives 18 months, and during this time, it explores a lot. Squirrel Saved From Hurricane Has Her Own Mini Teddy Bear And Won't Let Go Of It. Share this post on FB: When Hurricane Isaac hit, Jill was knocked out of her nest. Luckily for the young squirrel, she was rescued by a nice family, and though she’d only meant to stay until she was a little older and stronger, she ended up staying for life. Jill realized that life with her new family was pretty sweet.

Birds. Cats. Dogs. Elephants. Emphaty & Friendship. Endangered Animals. Foxes. Goats. Human Animal interactions. In the Sea. Insects and Arachnids. Octopus. Prehistoric. Reptiles. Wolfs. Researchers "Translate" Bat Talk. Turns Out, They Argue—A Lot. Plenty of animals communicate with one another, at least in a general way—wolves howl to each other, birds sing and dance to attract mates and big cats mark their territory with urine. But researchers at Tel Aviv University recently discovered that when at least one species communicates, it gets very specific.

BBC Host Barters With a Monkey Who Stole His iPhone. Zoolog: kwestionowanie świadomości ssaków i ptaków to ignorancja. This Grasshopper Mouse Hunts Scorpions, Howls at Moon. Photographer Captures the Wild Beauty and Elegance of Horses. Animals are perhaps one of the most difficult photography subjects to work with–you can’t exactly ask a cat to smile for the camera and expect it to happen. Moral behavior in animals. 2019 Comedy Wildlife Photography Awards. Did you know that each year there is a Comedy Wildlife Photography contest that give out awards to funniest animal pictures?

22 Animals You Didn't Know Exist. We learn all about the common animals when we're young: dogs, cats, cows, horses, elephants, and on and on. 19 First Time Experiences Caught On Camera. Flying squirrels secretly glow pink thanks to fluorescence. The Indian Giant Squirrel Is Almost Too Beautiful To Be Real. Photographer Captured Squirrels Every Day For Six Years And Here Are The Incredible Results. Did you know: The Octopus is a Smart, Mysterious Creature of the Sea □ Hedgehog Spines Hold the Secret to Preventing Concussions. If you ever find yourself watching hedgehog go about its day, you’ll notice that they tend to fall out of trees — a lot. Wild hedgehogs climb trees as high as 30 feet, looking for insects and food to eat. Kapitan Kamikaze. Endangered Animal Photos Bring Out the Humanity in Fragile Species.

Lifestyle.diply. Matka Natura - A kuku □ Beautiful Photos of Mammals Safely "Co-Sleeping" with Their Babies, As We've Done for Millions of Years. The term “co-sleeping” has always seemed strange to me. It implies parents are doing something special or out-of-the-ordinary by doing what mammals have always done for millions of years – sleep with their babies. “Are you going to co-sleep?”

People asked when I was pregnant. “What kind of co-sleeper are you going to buy?” Russian Miner Spends His Breaks Taking Photos Of Foxes In The Arctic Circle. Facebook. Under poaching pressure, elephants are evolving to lose their tusks. Thinking Humanity a ajouté une photo —... - Thinking Humanity. Crazy Creatures - 5 Bizarre Animal Mating Rituals. DPAN.tv - Koko 1971 - 2018. Why Do Giant Clams Glow? T. Живая Земля - Живая Земля a ajouté une photo. Opossums: Unsung Heroes in the Fight Against Ticks and Lyme Disease.

Facebook. Beyond the punk turtle: eight endangered animals that look surreal. Facebook. Explore the Modern Ark. Humans May Not Be The Most Intelligent Creatures on the Planet. Animals' Eyes Up Close. Animalism - Animals evolved eyes in incredibly diverse... Animalism - Humpback whales don’t all sing the same... Octopus and squid evolution is officially weirder than we could have ever imagined.