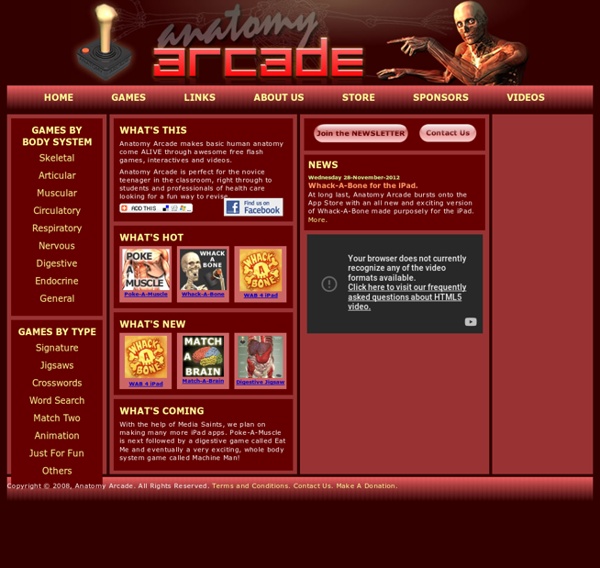 Anatomy Arcade makes basic human anatomy come ALIVE through awesome free flash games, interactives and videos. Anatomy Arcade is perfect for the novice teenager in the classroom, right through to students and professionals of health care looking for a fun way to revise. With the help of Media Saints, we plan on making many more iPad apps. Poke-A-Muscle is next followed by a digestive game called Eat Me and eventually a very exciting, whole body system game called Machine Man!

Healthline Body Maps Different organs can work together to perform a common function, like how the parts of your digestive system break down food. We refer to an integrated unit as an organ system. Groups of organ systems work together to make complete, functional organisms, like us! There are 11 major organ systems in the human body. The circulatory system is a body-wide network of blood, blood vessels, and lymph. Illustrated Encyclopedia of Human Anatomic Variation "Variability is the law of life," Sir William Osler. "The human features and countenance, although composed of some ten parts or a little more, are so fashioned that among so many thousands of men there are no two in existence who cannot be distinguished from one another. Book 7, Sect 8." Pliny the Elder, AD 23-79. It is important to understand that no two living organisms are structurally or functionally identical - animals or plants!

Science Games Help Baby Hazel understand the 4 basic requirements of plants. Then help her pick up the required tools and supplies for growing plants. Meet Janet. She'll be your tourguide through this crazy universe of ours! Don't worry...there's no spacesuit required. Correctly spell the Color words below each picture. GlassGiant.com Custom Maze Generator Make your own custom maze, just like Daedalus (only this should turn out better for you in the end). Print them out to amuse the kids on a rainy afternoon. It's easier than arts and crafts. Some samples: 1, 2, 3, 4, 5, 6, 7, 8, 9

General Issues in Scaling « PreviousHomeNext » S.S. Stevens came up with what I think is the simplest and most straightforward definition of scaling. CREativity in Science and Technology - CREST — The Learner's Way Grant Wiggins writing for te@chthough deals with this problem in an article titled 'Experiential Learning: Just Because It’s Hands-On Doesn’t Mean It’s Minds-On’. Grant asks students three questions that reveal the level to which they are cognitively engaged with the task at hand; What are you doing? Why are you doing it? and What does this help you do that’s important? How many students if asked these questions would reply that they are following the steps indicated and that they need to follow the steps to complete the task?

Future Astronauts - Virgin Galactic For centuries, humans all around the world have dreamed of flying to space. For decades, people have been able to watch as others actually made those journeys, heroically opening a new frontier. Now, at last, space travel is open to all of us. It still requires time, resources, and effort, but for the first time in history, space exploration is a possibility for everyone who dares to dream of it. The global group of Virgin Galactic Future Astronauts in many ways represents the most exciting club on Earth.

The Magic of Macy's - Create your letter EMAILS: Enjoy 15% off your next purchase of $100 or more.exclusions & details TEXTS: Shop our sales faster! Text JOIN to 62297 to get alerts delivered straight to your phone. What number is halfway between 1 and 9? Is it 5 — or 3? Ask adults from the industrialized world what number is halfway between 1 and 9, and most will say 5. But pose the same question to small children, or people living in some traditional societies, and they're likely to answer 3. Cognitive scientists theorize that that's because it's actually more natural for humans to think logarithmically than linearly: 30 is 1, and 32 is 9, so logarithmically, the number halfway between them is 31, or 3. Neural circuits seem to bear out that theory. For instance, psychological experiments suggest that multiplying the intensity of some sensory stimuli causes a linear increase in perceived intensity. The new work was led by John Sun, a graduate student in Vivek Goyal's Signal Transformation and Information Representation (STIR) Group at RLE.

PanelPicker This past year, students from around the world came together to collaborate on world issues affecting their communities, taking the concept of global learning and turning it into a reality. In GlobalCOlab (GCL), Students teaching students from around the world, has connected students and educators from different cultures and religions from around the world to cross-cut disciplines, curricula, and traditional subjects to empower participants through student-led and student-created topics. These topics are based around global issues affecting each student’s community. GCL educators will discuss the need for an educational paradigm shift towards a global classroom in a one hour panel format. Additional Supporting Materials

Dice Maker from Tools for Educators: Create your own custom dice with pictures, text or both images and text. You can make dice with just your text or choose an image category below to make dice with those images. (See below for some ideas on how to use the dice.) Scientific Method: Relationships Among Scientific Paradigms To see the full map of relationships among scientific paradigms, click here or on the image below. Note: The map is a large (8.7 MB) file and may take a while to download. Research & Node Layout: Kevin Boyack and Dick Klavans (mapofscience.com); Data: Thompson ISI; Graphics & Typography: W. Bradford Paley (didi.com/brad); Commissioned Katy Börner (scimaps.org) This map was constructed by sorting roughly 800,000 published papers into 776 different scientific paradigms (shown as pale circular nodes) based on how often the papers were cited together by authors of other papers.

Worms that can eat plastic could save us from destroying the planet. You tell me what's more repulsive: A Styrofoam cup laying on the ground... Photo by jnyemb/Flickr ...or a pile of slimy, pulsing mealworms?