WriteComics.com - Create your own comics! 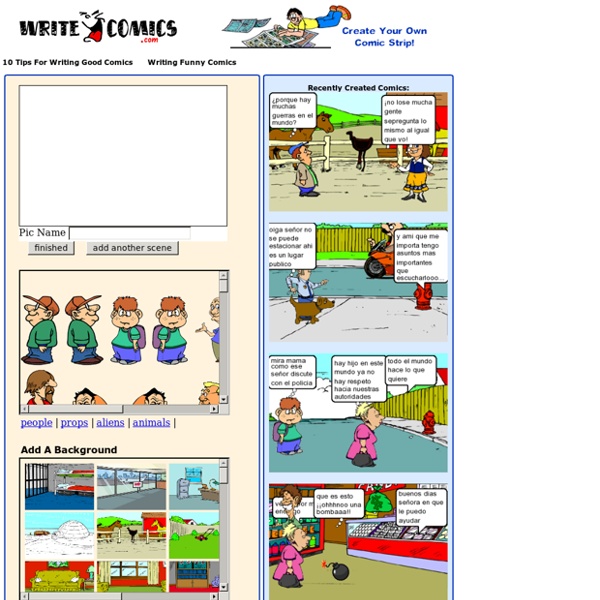 Make Business Video | Animated Video Production | GoAnimate.com How to Use OneNote at School: 10 Tips for Students & Teachers Advertisement Stephanie is just one of the 950 students at Sammamish High School in Seattle who have taken wholeheartedly to Microsoft OneNote along with their teachers. It makes it easier to think during class—and I’m doing less busy work. Across the country in Ohio, teachers gave their students “blizzard bags” when schools got closed for bad weather. Lugging around a satchel full of books pales a bit in comparison, doesn’t it? The notetaking member in Microsoft’s suite is a cross-platform productivity application. Outline Class Lectures Verbatim learning is the shortcut to mind numbness. Here, each outline is more than a simple list of bullet points. Move the outline using the grab handle of the container.Create multi-level outlines (up to 5 levels). Doodle or Sketch Away Are you a visual learner who learns better with drawings and pictures? A graph, the formation of a chemical bond, or an ecological cycle are best understood with a diagram. Doodling is better with a stylus. Ink Math

Making a Silent Movie (| Digital - teacher | Education in a technological world) During this half term, I've been busy working with our three lower school classes on a rather special project in their ICT lessons. It all began back in April when I blogged about an app I discovered in the app store that would allow a user to create an aged movie. My brain began to think just how I could incorporate this technology into our planned topic of 'Movie Making'. It seemed too good to be true - crowbarring a video creation app into a topic on movie making? How easy would that be! So, my plans began to take shape. However, I quickly threw all of that out of the window, because the BBC showed the first part of a series from Paul Merton all about the birth of Hollywood. Lesson One consisted of watching parts of the Paul Merton programme. In our second lesson we began to sketch out the ideas for the storyline. During the evolution of their work, some of these ideas were amended, or dropped, as they realised that it was either too hard to achieve, or too hard to film.

StoryWriter Students Join now to get your very own Boomer. Get writing on BoomWriter today and you could be a published author! Join Now Educators & Schools BoomWriter is free in the School environment - Join now and get your students working on their first book! Join Now 10 Video Projects Every Teacher Should Try Making classroom movies has gotten much easier now that cell phones, tablets and other devices feature video capabilities that are high quality and simple to use. And happily, we’ve found that students love to use video—it’s a format that they understand and that sparks their creativity. Here are ten ideas to try in your classroom today. Make a Book Trailer: Challenge students to design a movie-style trailer that excites their classmates about a must-read novel or nonfiction book. Try Digital Storytelling: Digital storytelling is a great format for students to share more about their lives or to present about a person in history. What’s the best video project you’ve ever done?

Creative Writing: Topics, Tips & Guidelines 10 Ideas for Classroom Video Projects “… ten years ago, not one student in a hundred, nay, one in a thousand, could have produced videos like this. It’s a whole new skill, a vital and important skill, and one utterly necessary not simply from the perspective of creating but also of comprehending video communication today.” (Stephen Downes) If you follow my Twitter-stream, you know that I spend a lot of time viewing, collecting & sharing videos. In this post, I share ideas on certain types of videos that I’ve gathered and how educators might use related methods or styles to engage students in constructing and deconstructing media while becoming critical consumers and producers of digital media. 1) Conversation with Future Me/You: “A Conversation with My 12 Year Old Self: 20th Anniversary Edition” is a recently popular video by Jeremiah McDonald. Another angle for this activity could be to create a video or a dialogue with a literary, historical or popular media character. 2) Genre Shifting Movie Trailers: 5) Stop Motion:

MyStorybook.com | Make Kids' Books Online For Free! Comics in the Classroom: Why Comics? Throughout the month of August, Teach.com and Reading With Pictures are bringing you Comics in the Classroom, a blog series about using comics in education, including why graphic novels are complex texts as defined by the Common Core Standards, how to use graphic texts to teach in the content areas, how and where to find the best graphic texts, and more. We hope you’ll join us and bring the power of comics to your classroom! The following guest post is written by Tracy Edmunds, M.A., Curriculum Manger at Reading With Pictures “It always strikes me as supremely odd that high culture venerates the written word on the one hand, and the fine visual arts on the other. When I was in school, kids would slip comics inside their textbooks to read on the side. Josh Elder, founder and president of Reading With Pictures, sums up the strengths of comics as educational tools with his “Three E’s of Comics.” Emergent, Beginning and Struggling Readers Accomplished Readers

The 10 Commandments of Typography Valentine Proust is Creative Director at Fontyou, a Paris-based online co-creation platform dedicated to typography. This post originally appeared on the Fontyou blog, and has been adapted with permission. With millions of beautiful typefaces scattering the Web, we felt it was time to lay down the rules on what makes typography great, and how to use them effectively. From graphic design pros to new creatives, here are our 10 commandments for making the best out of typography. 1. You shall not deform There are so many font families with several weights and styles, so why do some of you insist on bolding manually? If you need something bold or light, choose a font with several weight. The same rule goes for widths. If you didn’t know, a real small cap has a specific design, it’s not only an uppercase which have been reduced. 2. Ideally, combine two fonts, (okay, a maximum of three) and enjoy all their styles and variations to create contrasts. 3. Too short: Too long: 4. 5. 6. 7. 8. 9. 10.