Instead of TV, you should watch... 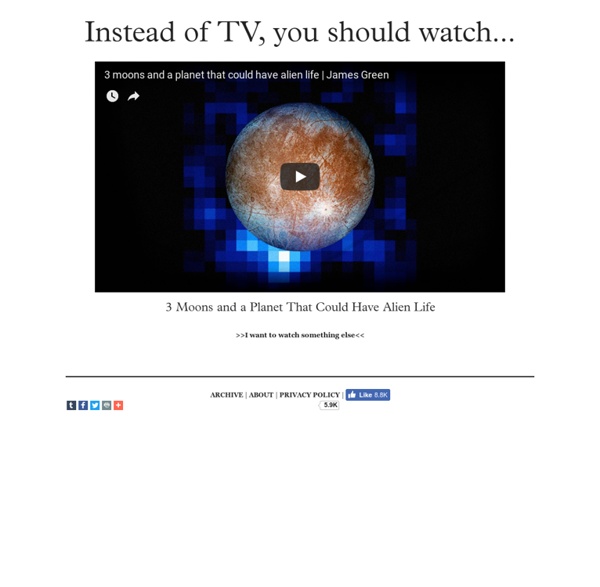 Johann Heinrich Pestalozzi Johann Heinrich Pestalozzi (pronounced [pestaˈlɔttsi]; January 12, 1746 – February 17, 1827) was a Swiss pedagogue and educational reformer who exemplified Romanticism in his approach. He founded several educational institutions both in German- and French-speaking regions of Switzerland and wrote many works explaining his revolutionary modern principles of education. His motto was "Learning by head, hand and heart". The World Factbook People from nearly every country share information with CIA, and new individuals contact us daily. If you have information you think might interest CIA due to our foreign intelligence collection mission, there are many ways to reach us. If you know of an imminent threat to a location inside the U.S., immediately contact your local law enforcement or FBI Field Office. For threats outside the U.S., contact CIA or go to a U.S. Embassy or Consulate and ask for the information to be passed to a U.S. official.

Top 25 Sites for Free Movies & TV Streaming Without Downloading ~ Watch Free Movies TV Shows Online Streaming Sites and Best Websites for Free Movies online without download by streaming movies and tv! Below you will be able to see each site rated by design, how many good links they have, the quality and quantity of the videos, their community, and update consistency. Hopefully it makes it easier for you to find a free movie site that you'll enjoy.

Become a Startup Founder (Complete Course) The Founder Institute presents "Become a Startup Founder" - the first online program designed to teach you everything you need to know to launch your startup. Become a Startup Founder is a comprehensive step-by-step program to help Founders launch a meaningful and enduring technology company at their own pace. The curriculum and the assignments are based on the intensive four-month Founder Institute program, an entrepreneur training and startup launch program that has helped launch hundreds of successful companies across the globe, like Udemy. The more than 55 videos organized in this offering represent the most inspirational, most informative and best-rated talks by leading CEOs at Founder Institute sessions worldwide. Everything has been curated to assist in your success. Your instructors for this course include legendary entrepreneurs, investors, and startup gurus, such as:

100 Incredible Lectures from the World's Top Scientists by Staff Writers By Sarah Russel Unless you’re enrolled at one of the best online colleges or are an elite member of the science and engineering inner circle, you’re probably left out of most of the exciting research explored by the world’s greatest scientists. But thanks to the Internet and the generosity of many universities and online colleges, you’ve now got access to the cutting edge theories and projects that are changing the world in this list below. Startup & Go - First Steps to Building a Technology Company About the Course: The Founder Institute is giving you "Startup and Go" – a crash course on the initial steps to creating a meaningful and enduring technology company. "Startup and Go" is a collection of talks from the very beginning of the Founder Institute’s startup accelerator program - which, in just 4.5 years, has launched over 1000 technology companies across 55 cities and 6 continents.

fără titlu ☂ This is what I get for not checking my email while I was on vacation… (Source: c-cassandra) Hey everyone! Google patents creepy smart toys that interact with kids On top of interacting with kids, the toys could be used to control media devices like TVs, DVD players and even smart home devices like thermostats. All that may have seemed like a good idea when the patent was filed in 2012 (it was granted last Thursday), but a lot has changed since then, privacy-wise. Big Brother Watch told the BBC that "the privacy concerns are clear when devices have the capacity to record conversations and log activity... (especially) when those devices are aimed at children." The lawyer who spotted the patent put it more succinctly, saying the "creepy" idea belonged "in a horror film." On the other hand, Google could de-creep such a device by limiting its servers' access to voice commands, which it records through "OK Google" anyway.

New Google Patent: Smart Toys that Connect to Smart Homes A few months ago, the Internet was abuzz with the news of a Wi-Fi-connected Barbie that has Siri-like powers. Google was way ahead of Mattel, according to a patent the search engine giant filed three years ago. StartUp, a legal technology firm, spotted the patent published on May 21, according to BBC. This technology could enable a stuffed animal to turn its head and listen to you before transmitting commands to other smart home devices. “Upon reception or a detection of a social cue, such as a movement and/or a spoken word or phrase, the anthropomorphic device may aim its gaze at the source of the social cue,” the patent specifies. The patent dates back to February 2012, meaning Google has been thinking about creating these toys for quite some time.

The Sounds of Interstellar Space The Sounds of Interstellar Space Nov. 1, 2013: Scifi movies are sometimes criticized when explosions in the void make noise. As the old saying goes, “in space, no one can hear you scream.” Exploring the Connected Universe – Delegate Level 1 – Resonance Academy A cutting edge interactive course Exploring the Connected Universe to better our planet through you. Engage with 9 leading faculty members and shift the current paradigm. Embark on a mind-bending journey, connect with 2,000 other travelers and apply this knowledge to transform yourself and our world. This course will TRANSFORM your reality and make you EMPOWERED, CONNECTED and KNOWLEDGEABLE to POSITIVELY IMPACT CHANGE! I have done thirty years of research and – together with a team of brilliant scientists – developed a unified field theory. My mission and the mission of the Resonance Academy is to get this information out to everyone, regardless of their educational background.