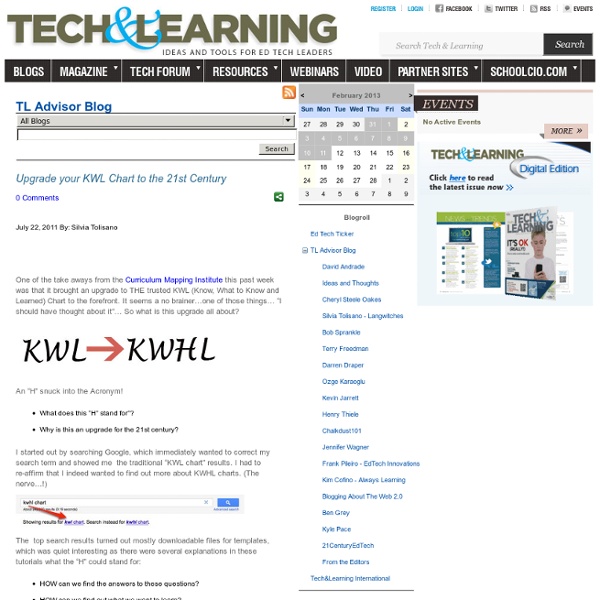 0 Comments July 22, 2011 By: Silvia Tolisano Jul 22 Written by: 7/22/2011 12:39 AM ShareThis One of the take aways from the Curriculum Mapping Institute this past week was that it brought an upgrade to THE trusted KWL (Know, What to Know and Learned) Chart to the forefront. An “H” snuck into the Acronym! What does this “H” stand for”? I started out by searching Google, which immediately wanted to correct my search term and showed me the traditional “KWL chart” results. The top search results turned out mostly downloadable files for templates, which was quiet interesting as there were several explanations in these tutorials what the “H” could stand for: HOW can we find the answers to these questions? In direct relation to our quest to bring Information literacy in the 21st century to our teachers and students, the “HOW will we find the information” sticks out right away for me. My Twitter network was much better in helping me extend my search for KWHL. Related:  Rigor in Reading

Flashcards: The world's largest online library of printable flash cards Inside My Global Classroom You might have realised that I don’t come from around these parts. I’m an Australian, and yet I function in online networks with educators from all parts of the world. I know my practice has benefited from these interactions. Where once I was more insular in my thoughts about education and greatly influenced by the professional journals published in my own country, now I am laid open to the education systems of other countries and can learn from their successes and failures shared via the generous souls on networking sites like Twitter. Some of the most exciting times I’ve experienced with students have come when we’ve made a connection with a teacher or class in another country. Just recently, a group of our Yr 12 students helped a geography classroom in Arizona gain an understanding of the Australian culture and climate so that they could make comparisons with their own geographical conditions. Global service learning project High in the Sky hopes © Brian Crosby, 2011 About the author

How to Mind Map a text book How to Mind Map a Text Book is often asked when having to learn large volumes of information. Mind Maps in Education started with "Using Mind Maps for note taking as an alternative to Linear Note Taking. Using Mind Maps as part of a study method is still one of the most popular applications of Mind Maps and Mind Mapping. By using Mind Maps for notes, you can reduce volumes of writing to a single page. The main idea behind the use of Mind Maps as study notes, is not simply to make notes on the subject, but to actually organise the notes. We will look at how to Mind Map a Text Book, as an example. You can use this method to Mind Map most non fiction books, as they normally have a good structure, with a table of contents. We will use the Mind Map Book by Tony Buzan, the inventor of Mind Maps as our sample book. Get Every Issue Free! Get Free Access to the Best Mind Mapping Tips, Tools, Techniques Resources and Opinions. 1. Now flip through the pages. Take a short break. 2. 3. 3. 4.

learn with Flashcards Group 1 Don’t settle for just any verb, learn one of the top 100 German verbs! Learn for free with audio flash cards and the dangerously addictive Lingo Dingo! Which verb will help you save the world? Done with German Verbs Group 1? Return to the German verbs menu when you have mastered Group 1 of the Top 100 German verbs. Emotional Intelligence Test This is an interactive version of the Personality-Based Emotional Intelligence Test. Introduction: The term Emotional Intelligence has been given many specific definitions since it gained popularity in the 1980s, but has is generally taken as theorized aspects of intelligence that that are not general intelligence but instead specific to people, such as understanding other peoples perspectives. The idea of EI has been very popular, although a persistent problem of the field is that no one is really sure how to measure EI. The PBEMIT is a new experimental measure of EI that has the subject make prediction about the structure of peoples personalities that are evaluated against real data. Procedure: In the PBEIT you will be given a personality test item and asked to choose from a group of other personality test items, which would be positively correlated with it. Participation: You use of this assessment should be for educational or entertainment purposes only.

University of Victoria - Counselling Services Choose a section preferrably not longer than 25 or 30 pages - perhaps one chapter, or a section of a chapter - that you can handle at one sitting. Step 1. Read the title, the introduction, and the conclusion (5 minutes). Step 2. Step 3. (Force yourself to do steps 1 to 3 in less than 25 minutes.) Step 4. Step 5. When you are finished, you should try to figure out how all the material you have remembered fits together - not necessarily as it is presented in the book, but as it is organized in your own thinking. Step 6. Gardner's Multiple Intelligences Howard Gardner of Harvard has identified seven distinct intelligences. This theory has emerged from recent cognitive research and "documents the extent to which students possess different kinds of minds and therefore learn, remember, perform, and understand in different ways," according to Gardner (1991). According to this theory, "we are all able to know the world through language, logical-mathematical analysis, spatial representation, musical thinking, the use of the body to solve problems or to make things, an understanding of other individuals, and an understanding of ourselves. Where individuals differ is in the strength of these intelligences - the so-called profile of intelligences -and in the ways in which such intelligences are invoked and combined to carry out different tasks, solve diverse problems, and progress in various domains."

Multipotentiality: multiple talents, multiple challenges One of the myths of highly talented people is they can choose whatever personal and career paths they want, and realize their abilities without hindrance. It doesn’t exactly work that easily. In her Unwrapping the Gifted post “ Multipotentiality ,” K-12 gifted education specialist Tamara Fisher quotes Bryant (a pseudonym), a graduating senior who lists his possible future careers as “applied psychologist, scientific psychologist, college teacher, philosophy, mathematics, architect, engineer.” He says, “I find it difficult to choose between careers because I fear how large the choice is. Fisher notes, “Multipotentiality is the state of having many exceptional talents, any one or more of which could make for a great career for that person. “Gifted children often (though of course not always) have multipotentiality. “On the bright side, they have many realistic options for future careers. She adds that having “so many great possible outcomes can be a source of debilitating stress.” Related:

Being a Better Online Reader - The New Yorker Soon after Maryanne Wolf published “Proust and the Squid,” a history of the science and the development of the reading brain from antiquity to the twenty-first century, she began to receive letters from readers. Hundreds of them. While the backgrounds of the writers varied, a theme began to emerge: the more reading moved online, the less students seemed to understand. There were the architects who wrote to her about students who relied so heavily on ready digital information that they were unprepared to address basic problems onsite. Certainly, as we turn to online reading, the physiology of the reading process itself shifts; we don’t read the same way online as we do on paper. The screen, for one, seems to encourage more skimming behavior: when we scroll, we tend to read more quickly (and less deeply) than when we move sequentially from page to page. The online world, too, tends to exhaust our resources more quickly than the page. Wolf’s concerns go far beyond simple comprehension.