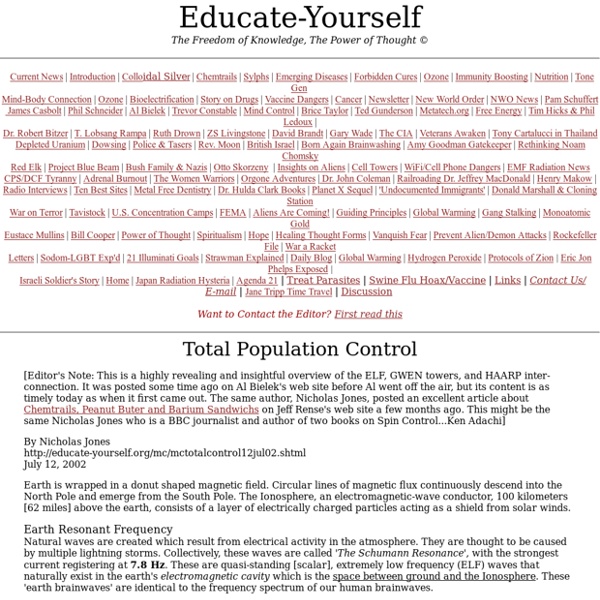 Dr. Barrie Trower Reveals Microwaves, Chemtrails as Weapons of Social Control ICAACT was given an exclusive interview with Dr. Barrie Trower, a true British gentlemen and hero, who has spent many years fighting for humanity. After the meeting our respect and admiration for him rose to new heights. During the two days of interview, we touched on many different topics, but the main theme was the abuse of microwaves as a secret and covert stealth weapon, that has been around for at least 50-60 years. This type of weapon has taken many different forms over the years and it is still used in many different types of targeting, even to the point of death around the world. We started the Interview with basic knowledge about microwaves and how they influence the human body and mind. The Interview was filmed on May the 1st and 2nd, 2012. TETRA is the UK Police radio system that Dr. More of the Interview with Dr. More Video Interviews from Dr. Like this: Like Loading...

TETRA quotes TETRA, & GSM quotes (and GWEN)[back] Death towers "Microwave radiation can blind you, alter your behaviour, cause genetic damage, even kill you......The risks have been hidden from you by the Pentagon, the State Department, and the electronics industry." Paul Brodeur "Approximately one death tower per 2,000 people, on average."--- Don Croft "This seems to me to be rather excessive. The total ERP for a Cell Phone BTS site (360 degree coverage) is on the order of 27,000 to 54,000 watts! [2009 Aug EW] Orgonite V EMF A retired German man living in Santiago had bought the device so he could make a formal complaint to the telecomunications authority because his wife was very sensitive to the towers and was getting progresively sicker and weaker. The government, government scientists and [this industry] will be responsible for more civilian deaths in peacetime than all the terrorist organisations put together.’ [EW Feb 2009] Tower Identification. . Surveillance (see that in your paper?) 17.

Pages - Field-of-the-future The Forum - 08/21/2004 Field of the future: 'Smart dust' sprinkled on farming industry By Gerry Glimour, The Forum Tiny sensors planted in a sugar beet field south of Fargo gather data vital to helping the crop reach its harvest potential. "It can influence everything - from the timing of fungicide or deciding whether to use it at all," says Alex Warner. The president of fledgling Pedigree Technologies is in this field demonstrating the potential of "smart dust" to representatives of American Crystal Sugar Co. Smart dust is the industry tag given to radio frequency identification technology taken to a new level. Smart dust technology is being touted as a management tool in everything from retail, manufacturing and transportation to security, home health care and pharmaceuticals. Warner and his backers believe it shows promise for providing cost savings and productivity gains for the Red River Valley's growers and food processors. Warner grew up on the farm. "That's a macro perspective.

What Happens When Spies Can Eavesdrop on Any Conversation? - Defense One Imagine having access to the all of the world’s recorded conversations, videos that people have posted to YouTube, in addition to chatter collected by random microphones in public places. Then picture the possibility of searching that dataset for clues related to terms that you are interested in the same way you search Google. You could look up, for example, who was having a conversation right now about plastic explosives, about a particular flight departing from Islamabad, about Islamic State leader Abu Bakr al-Baghdadi in reference to a particular area of northern Iraq. On Nov. 17, the U.S. announced a new challenge called Automatic Speech recognition in Reverberant Environments, giving it the acronym ASpIRE. Importantly, the ASpIRE challenge is only the most recent government research program aimed at modernizing speech recognition for intelligence gathering. A Brief History of Teaching Machines to Listen HMM works like this: Imagine you have a friend who works in an office.

Radiofrequency and Microwave Radiation Radiofrequency (RF) and microwave (MW) radiation are electromagnetic radiation in the frequency ranges 3 kilohertz (kHz) - 300 Megahertz (MHz), and 300 MHz - 300 gigahertz (GHz), respectively. Research continues on possible biological effects of exposure to RF/MW radiation from radios, cellular phones, the processing and cooking of foods, heat sealers, vinyl welders, high frequency welders, induction heaters, flow solder machines, communications transmitters, radar transmitters, ion implant equipment, microwave drying equipment, sputtering equipment and glue curing. There are no specific standards for radiofrequency and microwave radiation issues. How do I find out about employer responsibilities and workers' rights? Workers have a right to a safe workplace. OSHA can help answer questions or concerns from employers and workers. Small businesses may contact OSHA's free on-site consultation services funded by OSHA to help determine whether there are hazards at their worksites. Back to Top

What are Microwave Signals? (with pictures) Yes, microwaves are alien technology. I was looking into the origin of microwaves and such and I discovered that the first use of a microwave was apparently on Air Force One in 1947. The UFO crash in Roswell was in 1947. Quite curious if you ask me. I also learned that microwaves, which we are exposed to constantly through the use of "modern technology", affect the water and fat in our bodies. And Nathan had said "Yes, I’ve heard that microwave signals do something to the food, too..." Time to go back to the old ways.