The Graph Of Ideas 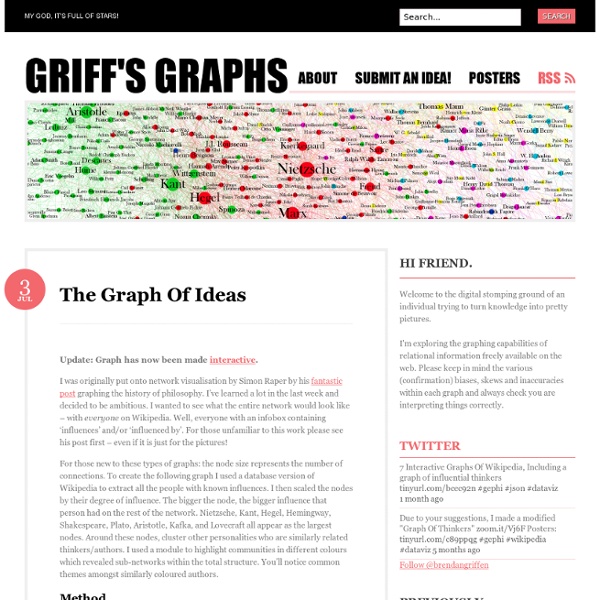 Update: Graph has now been made interactive. I was originally put onto network visualisation by Simon Raper by his fantastic post graphing the history of philosophy. I’ve learned a lot in the last week and decided to be ambitious. I wanted to see what the entire network would look like – with everyone on Wikipedia. Well, everyone with an infobox containing ‘influences’ and/or ‘influenced by’. For those unfamiliar to this work please see his post first – even if it is just for the pictures! For those new to these types of graphs: the node size represents the number of connections. Method First I queried Snorql and retrieved every person who had a registered ‘influence’ or registered ‘influenced by’ value (restricted to people only so if they were influenced by ‘anime’, they were excluded).I then decoded these using a neat little URL decoder and imported them into Microsoft Excel for further processing (removing things like ‘(Musician)’ and other similar syntax). Caveats The Future The Network

Visualizing the History of Philosophy as a social network: The Problem with Hegel Introduction This is Part I of a series. Part II is available here, and has an updated graphic. How Important is Hegel?! I was surprised I hadn't seen this graphic at Drunks and Lampposts made with Gephi until a friend posted it on facebook last week. The original is here, and here's my version: Thought experiment A thought experiment or Gedankenexperiment (from German) considers some hypothesis, theory,[1] or principle for the purpose of thinking through its consequences. Given the structure of the experiment, it may or may not be possible to actually perform it, and, in the case that it is possible for it to be performed, there need be no intention of any kind to actually perform the experiment in question. The common goal of a thought experiment is to explore the potential consequences of the principle in question. Famous examples of thought experiments include Schrödinger's cat, illustrating quantum indeterminacy through the manipulation of a perfectly sealed environment and a tiny bit of radioactive substance, and Maxwell's demon, which attempts to demonstrate the ability of a hypothetical finite being to violate the second law of thermodynamics.

brain of mat kelcey (update: like all interesting things it turns out someone else had already done this :D) questions a recent xkcd posed the idea... 50 Informative and Well-Designed Infographics It’s impossible to comprehend complex data or analyze large amounts of information, if we only use words or texts. Information graphics or better known as infographics are visual explanation of data, information or knowledge. These graphics are excellent visual tools for explaining huge amounts of information where complex data needs to be explained immediately and clearly. Let me show you how Rick Mans explain how infographics ease the process of communicating conceptual information Image credit. Infographic is one of the most challenging types of graphic design because the creation process alone is pretty intensive.

Occupy Philosophy! Smack in the middle of the holidays, on a Wednesday night in very late December, about 150 people—philosophy professors and graduate students—gathered in a hotel conference room in Washington, DC, for a panel called, “Thinking Occupation: Philosophers Respond to Occupy Wall Street.” The panel had been added, very late in the game, to the program of the 108th Eastern Division American Philosophical Association Meeting. The size of the crowd surprised everyone, particularly since we’d organized things long after the printed conference program for had been sent out to APA members. We were up against stiff competition (the December APA is a zoo of sessions), including meetings of the International Association for Environmental Philosophy, the Hegel Society of America, the Radical Philosophy Association, and the Society for the History of Political Philosophy, among many others. It was at dinnertime (7:30-9:30pm). We had, of course, a lot to say.

Brain cell regrowth linked to benefits of exercise, sexual behaviors and reproductive issues Tampa, Fla. (Mar. 10, 2011) – Two studies published by an interdisciplinary team in the current special issue of Cell Transplantation (20:1) (free to read), link the regrowth of key adult brain cells (neurogenesis) in two critical areas of the brain to both the benefits of exercise as a stress reducer and also to sexual behavior and reproductive issues. The two studies reviewing the causes and impacts of neurogenesis came out of a recent Pan Pacific Symposium on Stem Cell Research held in Taichung, Taiwan. Until the 1960s, the idea that the adult brain could experience neural cell re-growth was not accepted; research over the next 30 years confirmed that adult brain cells could, and did, in fact, regenerate. Recent research has focused on the role of neurogenesis. Subsequent important findings promise to change not only therapeutic interventions, but our understanding of aging, sexual potency and psychiatric diseases as well.