What Kids Should Know About Their Own Brains 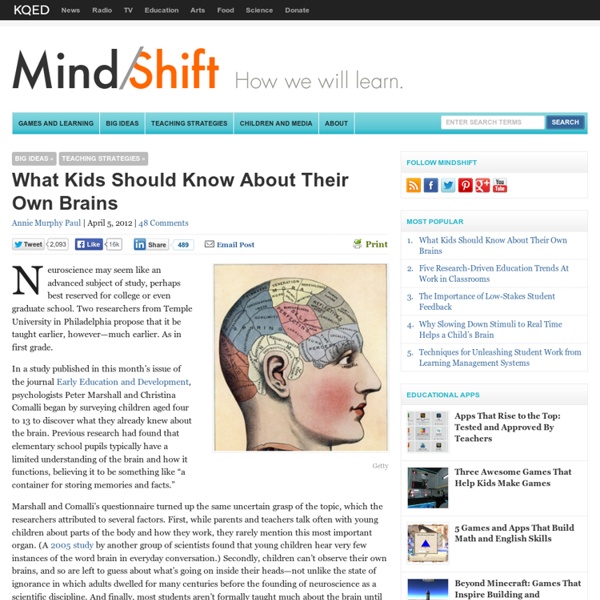 Getty Neuroscience may seem like an advanced subject of study, perhaps best reserved for college or even graduate school. Two researchers from Temple University in Philadelphia propose that it be taught earlier, however—much earlier. As in first grade. In a study published in this month’s issue of the journal Early Education and Development, psychologists Peter Marshall and Christina Comalli began by surveying children aged four to 13 to discover what they already knew about the brain. Previous research had found that elementary school pupils typically have a limited understanding of the brain and how it functions, believing it to be something like “a container for storing memories and facts.” Marshall and Comalli’s questionnaire turned up the same uncertain grasp of the topic, which the researchers attributed to several factors. A 20-minute lesson about the brain was enough to improve knowledge of brain functioning. But the success of their effort opens another possibility. Related:  Brain-Based Learning

Brains, Brains, Brains! How the Mind of a Middle Schooler Works In honor of October's most awesome of holidays, I am going to begin a three-part series about the gentlemen zombie's choice of cuisine: the 'tween brain. However, I need to be frank. I'm not going to be able to teach you deeply about the 'tween brain here. I'm not a neurologist. What I am going to do is make an argument, hopefully a darn good one, as to why you should educate yourself further about it. Imagine that this is the CliffNotes of 'tween brain research, but your research should not stop at this because, frankly, the more you know about how they learn, the more you can pass on to them the secrets of how they process and embed knowledge. The following is an edited excerpt from my book on middle schoolers: 'Tween Crayons and Curfews: Tips for Middle School Teachers. What are 'tweens most interested in? A. ancient history between the years of 400 BC and 1400 AD B. how to write a literary analysis essay on the theme of Number the Stars D. themselves Answer: D. Tapping into 'Tweens

For Teenage Brains, the Importance of Continuing to Learn Deeply Big Ideas Daniel Horowitz for NPR By Shankar Vedantam, NPR John Hewitt is a neuroscientist who studies the biology of intelligence. “I’m a father of four children myself and I never worried too much about the environments that I was providing for my children because I thought, well, it would all work out in the end anyway — aren’t the genes especially powerful?” He knew intelligence has a strong biological component. But recently, Hewitt discovered something that surprised him. “Well, I may have been wrong,” he admits. Among some children with very high IQs, the brain appears to stay in learning hyperdrive for an extended period. What Hewitt, director of the Institute for Behavioral Genetics at the University of Colorado, is talking about is a new understanding of the interplay between your genetic inheritance and how you learn from the environment. “In language you have specific words and vocabulary,” says Brant, a postdoctoral fellow in psychology at Penn State University. Hewitt agrees.

Multiple Forms of ADHD? By Rick Nauert PhD Senior News Editor Reviewed by John M. Grohol, Psy.D. on April 3, 2012 New research may help explain the dramatic increase in attention-deficit hyperactivity disorder cases. Investigators believe ADHD symptoms may actually represent an entire family of disorders, similar to the classification of various subtypes of cancer. The research, which highlights various versions of the disease, each with differing impacts, demonstrates that there is likely not going to be a “one-size-fits-all” approach to treating patients. Experts believe that new methods will be required to improve the diagnosis, prognosis and treatment of the disease. Researchers believe scientists will need to shift their thinking when it comes to conducting research. The research, led by OHSU scientists Damien Fair, Ph.D., and Joel Nigg, Ph.D., will be published online this week in the Proceedings of the National Academy of Sciences. Source: Oregon State University APA Reference Nauert, R. (2012).

Big Thinkers: Judy Willis on the Science of Learning Judy Willis: Hi, I'm Judy Willis and I am a neurologist. I've been a neurologist for 15 years and after the 15 years my patient practice really changed. I started getting so many referrals for kids whose teachers thought they had ADD, obsessive compulsive disorder, staring spells, seizures petit mal epilepsy, and the increase was huge and yet the kids had no greater incidence of it. And I saw the notes were coming from the school so I visited the schools. The problem was that the way they were being taught was lectured. There's a part of the brain that is an emotional filter. So if a person is in a state of stress, the amygdala gets highly active. So we need to keep that switching station in a state of low stress. So if there is something new in the classroom, a new picture, a great bulletin board, something that's interesting, something that captures their curiosity. So how do you get students to focus their attention? The other one I'll use is color. What else does a videogame do?

The Mind of a Middle Schooler: How Brains Learn In my last post, I began a celebration of brains and made the argument as to why teachers need to brush up on their knowledge of brains in order to reach that all-too-allusive 'tween noggin. During this, my second of three posts in this series, I'll bring up a few key terms you should know in your own neurologic education. Then, we'll follow a history-related fact as it enters the brain of an average middle schooler, weaving its way towards the blessed long-term memory. Excerpted from my book, 'Tween Crayons and Curfews: Tips for Middle School Teachers, these posts are boiled down versions of my chapter on the 'tween brain in the hopes that we not only increase our own knowledge of our clientele, but share that knowledge with them as well. Brain Talk Before we proceed, here are some key words to know: Automatic Brain: This is also known as the reactive brain and makes up the remaining 83 percent of the brain. Amygdala: This monitors the emotions. In the Classroom Whew!

The Teen Brain: It's Just Not Grown Up Yet Brain-Compatible Study Strategies Driving my 15-year-old daughter home from cross country, I asked her where she learned to study. She replied, "Mom, I have never been taught how to study, we just do it because teachers have way too much to teach! They assume we know, and Cornell Notes are their idea of teaching us how to study!" Below is a brief, simply-stated template on study skills for fifth grade students preparing for a math assessment. Strategies You Need These study skills may be implemented for any subject and should begin in the upper elementary years before students encounter the more challenging middle and high school curriculums. PredictionAnalogyMetacognitionTeaching what we need to learnDiscussionVisualizationFocused attention practiceStudy-sleep cycle An Analogy for Fifth Graders Taking a test is like baking a cake, putting together a model airplane, learning a video game, playing a sport or getting ready for a performance. Gearing up for a test Math Test Preparation After the Test Parent and Teacher Support

The Genius in All of Us ADD/ADHD Medications: Are ADHD Drugs Right for You or Your Child? Medication for ADD & ADHD: What you need to know Making ADD/ADHD medication decisions can be difficult, but doing your homework helps. The first thing to understand is exactly what the medications for ADD and ADHD can and can’t do. ADHD medication may help improve the ability to concentrate, control impulses, plan ahead, and follow through with tasks. However, it isn’t a magic pill that will fix all of your or your child’s problems. Even when the medication is working, a child with ADD/ADHD might still struggle with forgetfulness, emotional problems, and social awkwardness, or an adult with disorganization, distractibility, and relationship difficulties. Medication doesn’t cure ADD/ADHD. Generic vs. Generic drugs have the same use, dosage, side effects, risks, safety profile, and potency as the original brand-name drug. Occasionally, brand-name drugs have different coatings or color dyes to change their appearance. Stimulant medications for ADD & ADHD ADD / ADHD Stimulant safety concerns