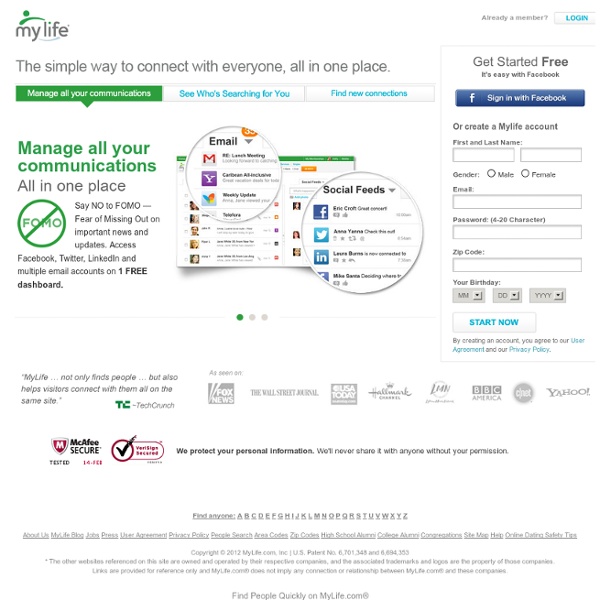 Find and Follow Connections Search over 700M profiles quickly to find personal and professional contacts you can't find elsewhere, plus organize all your connections in one place to get up-to-date information and alerts for everyone that matters. Find People Monitor and Share Your Identity Control and monitor how you look online, and share important updates with the people you choose. You can track Who's Searching for You®, and even use our Public Record Remover to remove your personal data from sites that sell it.

Philly: Another burka robbery Burkas are all the rage in America, particularly among the criminal. via Teens in Muslim burkas try to rob Delco gun shop. Most teenagers do dumb things. But not trying-to-rob-Joe-Galiano dumb. Who is Joe Galiano? He’s the owner of Suburban Armory, the gun shop on MacDade Boulevard in Collingdale Borough, Delaware County.

Meetup Explore Meetup Find events hosted by local groups where you can meet new people, try something new, or just do more of what you love. Get started Photo: The Front Range Mountain Bikers Meetup Group the flowerchild dwelling: do what you can. – Mozilla Firefox I know that there are some of you who feel "behind." Like something hasn't *clicked*, yet. It feels like you're running in place. Isn't that the pits?

Massive Food Stamp Fraud Ring Busted in Arizona K&S convenience store workers Kameel Sweiss, Ameer Sweiss, and Faday Sweiss were arrested on Wednesday on charges of suspicion of illegally conducting an enterprise, fraudulent schemes and artifices, money laundering, unlawful use of food stamps, and computer tampering. "People were essentially selling their cards to [the] store," said spokesperson Stephanie Grisham. Arizona Attorney General Tom Horne says the bust is the fifth of its kind this year and that this is the largest to date. Horne told Fox News host Neil Cavuto that food stamp fraud is a growing problem, as 47,635,297 people now receive taxpayer-funded food stamps. "It happens quite a bit," said Horne. "It's done in two ways.

Hotmail Don't have a Microsoft account? Sign up now Microsoft account What's this? Email or phone English Grammar 101 - Foreword – Mozilla Firefox Welcome to English Grammar 101. The author, Marvin Van Horne, originally created this instructional series from his love of language and the real world needs of his students. Once created, he quickly realized the series could not only benefit his students but anyone interested in improving his or her knowledge of the English language.

Long Road Ahead to 'Six Million Dollar Man' SAN DIEGO -- Robotic, brain-controlled replacements for human hands and eyes no longer appear to be purely sci-fi fantasy, but dozens of hurdles to making them into plastic-and-metal reality still remain, researchers suggested here. Such issues as how to keep electrodes functioning in vivo for years, where to connect them to nerve fibers, how to detect the brain signals intended to control a robotic limb -- even how to keep a robotic leg from running when a patient dreams of running -- are among those that researchers on "brain-machine interfaces" are still contending with, according to presenters at a session Saturday at the annual meeting of the Society for Neuroscience. Talk of such devices brings to mind the 1970s TV program "The Six Million Dollar Man" and the 1987 film "Robocop," as well as the new series "Almost Human" that debuts this month. All feature badly mangled humans outfitted with "bionic" replacement parts that respond to the person's thoughts.

A Daring Adventure - StumbleUpon – Mozilla Firefox inShare9 5If you like the following post, you can get an expanded version with 50 quotes as an ebook by signing up for my newsletter in the box on the left. Not only that, but you’ll get the heads up on forthcoming free books and Life Coaching specials as as well as my ebook that takes an in-depth look at goal setting. The SEJ x SMX West Interview: Brian Clark of CopyBlogger I had the opportunity to interview marketing experts who are speaking at SMX West as part of SEJ’s partnership with Third Door Media. Be sure to attend Brian’s session on Tuesday, March 11 (and visit SEJ’s booth in the exhibit hall!) Bio: Brian Clark is a serial entrepreneur based in Boulder, Colorado. He’s the founder and CEO of Copyblogger Media, and the host of New Rainmaker, debuting in January of 2014. Brian built three successful service businesses using online marketing techniques before moving to a completely online business model. The result of that move — Copyblogger Media — is an innovative company that provides the advice and solutions that empower people to successfully grow their businesses through social media and online marketing.