Stylized water tutorial. There are a lot of ways to do water. 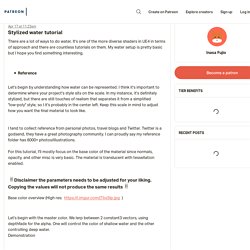 It's one of the more diverse shaders in UE4 in terms of approach and there are countless tutorials on them. My water setup is pretty basic but I hope you find something interesting. Reference Let's begin by understanding how water can be represented. I think it's important to determine where your project's style sits on the scale. I tend to collect reference from personal photos, travel blogs and Twitter. For this tutorial, I'll mostly focus on the base color of the material since normals, opacity, and other misc is very basic. . ❗ Disclaimer the parameters needs to be adjusted for your liking. Base color overview (High res: ) Let's begin with the master color. 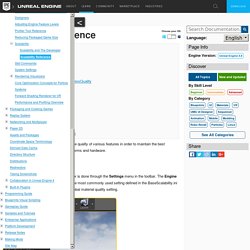 Scalability Settings Accessing the Scalability settings in the editor is done through the Settings menu in the toolbar. The Engine Scalability Settings contains shortcuts to the most commonly used setting defined in the BaseScalability.ini file, while Material Quality Level sets the global material quality setting. Resolution Scale Unreal Engine 4 can render a scene in lower resolution and scale the image up to the target resolution. Left: 50% no AA, Middle: 50% with AA, Right: 100% (no resolution scale) with AA Having a softer input image helps the up-sampling step. 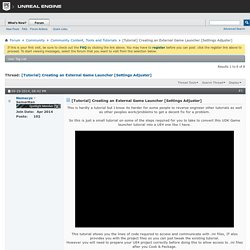 I really want to do an external launcher my project is quite demanding and this configurator would be great for tweaking from computer to computer, i'm currently on 4.14.3 and the folder change a bit and the content of gameusersettings also changed from what you shownmy question is: i do really need to cook and package the project without create a single .pak file for having these files? Or since it's generated once, next time i make the build but this time using the option to make the project under a giant .pak file, i can just copy the inis to the packaged project and this going to works? How To Unwrap A UV Sphere In Blender. [TUTORIAL] UE4 Night Scene - Includes MOON. 3 - Adding Textures to a Material. Blender 2.7 UV Mapping. Warren Marshall. Want to support me or say thank you? 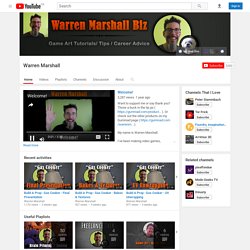 Throw a buck in the tip jar ( ). Or check out the other products on my Gumroad page ( ). My name is Warren Marshall. I’ve been making video games, professionally, for around 25 years now. I spent the majority of my career at Epic Games where I wore a lot of different hats over the 15+ years I was there. After that, I set out on my own and have been freelancing since the summer of 2015 and since then I’ve worked on a lot of great projects and had a ton of fun. My goal with this channel is to share what I’ve learned over the years. I make original content for this channel as well as archive my various streaming adventures here as well. Sharing isn’t a zero sum game … showing you a technique or telling you about an app or a shortcut doesn’t take it away from ME. Music By Jeremy RobinsonInstagram : jermsky_Sound Cloud : Show less. Opening and repairing a 3d model (stl) file in Blender. Opening and repairing a 3d model (stl) file in Blender Downloading blender www.blender.org/ Choose operating system, download from USA mirror site. 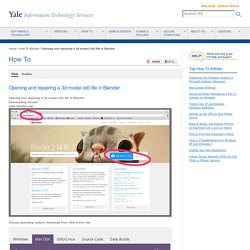 Animated Loading Screen. Approved for Versions:4.7 Overview The most common way of doing loading screens would be to have a static image just before the load happens and draw it on the screen again once the level had loaded (To give the impression of a seamless load even though the engine hangs when doing this!). 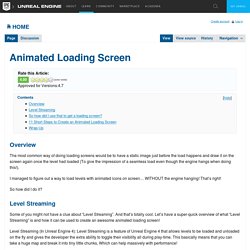 Blender to Unreal Engine 4 in a Nutshell. Scalability Reference. Get Started with UE4. Editor Basics A Project is a self-contained unit that holds all the content and code that make up an individual game and coincides with a set of directories on your disk. 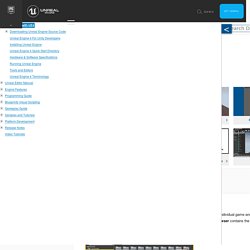 For example, in the image below the Hierarchy Tree of the Content Browser contains the same directory structure found inside your Project folder on your disk. Click image for full view. Although a Project is often referenced by the .uproject file associated with it, they are two separate files that exist alongside each other.

The .uproject is a reference file used to create, open, or save a file, whereas the Project contains all of the files and folders associated with it. You can create any number of different Projects which can all be maintained and developed in parallel. In Unreal Editor, the scenes in which you create your game experience are generally referred to as Levels . Swimmable Water Volume Tutorial. Swimmable Water Volume This tutorial will go through how to set up a swimmable water volume using a “Physics Volume” in conjunction with a “Post Process Volume” to get the basic look and feel of swimming underwater. 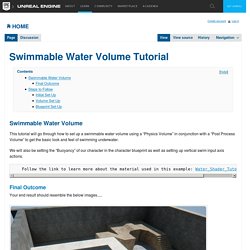 We will also be setting the “Buoyancy” of our character in the character blueprint as well as setting up vertical swim input axis actions.