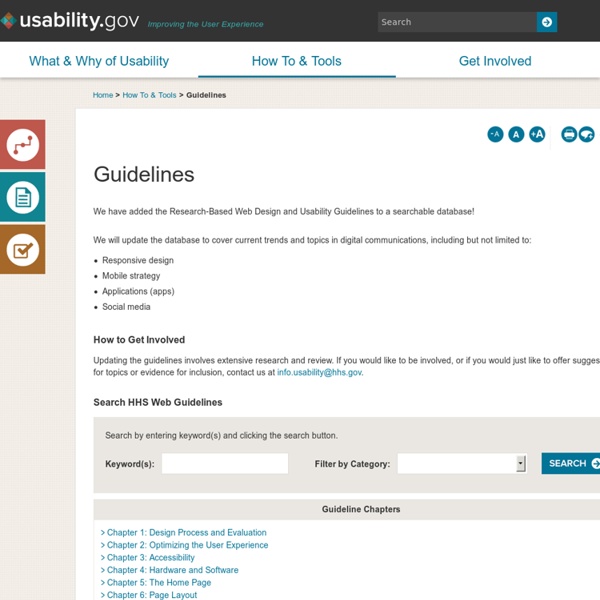 Throughout 2013, we are updating the Research-Based Web Design and Usability Guidelines that so many of you reference and rely on. The first step in that process was to implement a searchable database. The database allows you to access the guidelines associated with your area of interest and allows us to update the guidelines more easily and frequently. At present, the database houses the current guidelines published in 2006. Moving forward, we will update the database to cover current trends and topics in digital communications, including: Responsive design Mobile strategy Applications (apps) Social media

Jakob Nielsen's Newsletter 10 Usability Heuristics for User Interface Design April 24, 1994 | Article: 2 minutes to readJakob Nielsen's 10 general principles for interaction design. They are called "heuristics" because they are broad rules of thumb and not specific usability guidelines. When to Use Which User-Experience Research Methods October 12, 2014 | Article: 8 minutes to readModern day UX research methods answer a wide range of questions. To know when to use which method, each of 20 methods is mapped across 3 dimensions and over time within a typical product-development process. Usability 101: Introduction to Usability January 4, 2012 | Article: 4 minutes to readWhat is usability?

annyang! Easily add speech recognition to your site Go ahead, try it… Say "Hello!" Annyang! Let's try something more interesting… 'There's No Turning Back': My Interview With a Hunted American Jihadist | Danger Room Omar Hammami grew up in the deep south, in a town called Daphne, near Mobile. Born in 1984 to a Syrian Muslim immigrant father and a white Protestant mother, he was raised as a Christian, and described himself in his 2012 online autobiography as “a social butterfly” and “the most popular guy in school.” Hammami began to feel culturally adrift as a teenager, especially as he began to explore his Islamic heritage, a process outlined in a riveting 2010 New York Times Magazine piece. By the time he was in tenth grade, a kid who used to dress like a suburban skater “began to feel that I was being flung into an ocean and being asked not to get wet,” he would later write.

HTML Marquees Sometimes you might want your text or photos to continuously "scroll" across the screen. Or maybe you'd like it to zoom in from the side, then stay there. Or perhaps you'd like it to bounce back and forth across the screen. Designing Web Interfaces We just wrapped up last day of the IA Summit 2012 in lovely New Orleans. I have enjoyed wonderful food, drinks, company and speakers including Stephen Anderson , Josh Clark , Chris Risdon , Greg Nudelman, Nadine Schaeffer and Dan Brown. But one of the talks on Saturday, a panel called Taking the Plunge: Diving into Indie UX , left me gaping. The first section focused on design and design process and how it would be different if you are acting as an independent operator vs working within an agency or organization. I was shocked to hear the 4 panelists don’t collaborate with other designers or work with mentors because, as one said “ I’m a good designer, I don’t need help “.

A/B Testing: The Complete Guide - Visual Website Optimizer Start here for What is A/B Testing? A/B testing (sometimes called split testing) is comparing two versions of a web page to see which one performs better. You compare two web pages by showing the two variants (let's call them A and B) to similar visitors at the same time. What Is It Now available here in Finnish thanks to Oskari Laine, Helsinki, Finland. Mikä Computer Programming? And here is a Czech translation (provided by the autip.com team).

5 Tactics For Improving Visibility Of B2B Content Marketing Initiatives It should come as no surprise that for B2B marketers surveyed in Marketingsherpa’s 2012 B2B Marketing Benchmark Report, five of the top six B2B marketing priorities and challenges were related to lead generation process. More importantly, while brand awareness (the only priority outside of the lead generation process) was an important priority, its fourth place rank in importance narrowly beat out the challenge B2B marketers face developing lead nurturing initiatives. Effective content marketing can become a central component of lead generation initiatives. Cone Trees Summary On its login page, Twitter uses JavaScript to set focus on the user name text field so the user can sign in to the account with least effort possible. However, due to the incompleteness and the placement of the JavaScript, there is a possibility that the user’s password may get revealed (in the user name text field of the login form) if the user attempts to enter their account details before the login page completely loads. The description of the usability issue and solution are discussed ahead. Update (Jan 20, 2010): I informed Twitter about it and Anamitra Banerji from Twitter product got back letting me know he has someone working on fixing it. Update (Mar 28, 2010): I noticed today that they (finally, one and a half months later) fixed up the issue. The Issue

Guidelines for Building Touch-friendly Sites - IEBlog In Windows 8 Consumer Preview, IE10 enables fast and fluid multi-touch experiences on the Web. Most sites work fine with touch in IE10 with no changes to the site. This post provides four simple guidelines to ensure your customers who use touch can most effectively use your site. We’ve written before about how new input devices and touch screens make the Web more fun, interactive, and immersive.