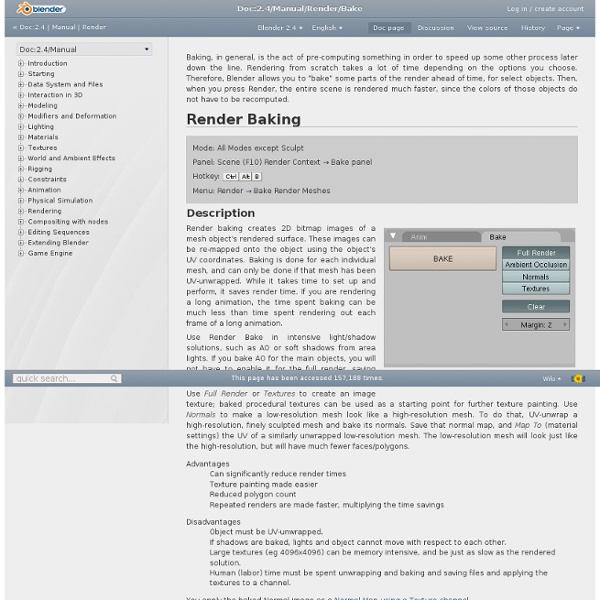 From BlenderWiki Baking, in general, is the act of pre-computing something in order to speed up some other process later down the line. Rendering from scratch takes a lot of time depending on the options you choose. Mode: All Modes except Sculpt Panel: Scene (F10) Render Context → Bake panel Hotkey: CtrlAltB Menu: Render → Bake Render Meshes Description The Bake tab in the Render buttons panel. Render baking creates 2D bitmap images of a mesh object's rendered surface. Use Render Bake in intensive light/shadow solutions, such as AO or soft shadows from area lights. Use Full Render or Textures to create an image texture; baked procedural textures can be used as a starting point for further texture painting. Advantages Can significantly reduce render times Texture painting made easier Reduced polygon count Repeated renders are made faster, multiplying the time savings Disadvantages Object must be UV-unwrapped. If shadows are baked, lights and object cannot move with respect to each other. Options Clear Related:  Modeling&Anatomy • Texturing • Game Engine

Beautiful, Yet Friendly Part 1: Stop Hitting the Bottleneck Beautiful, Yet Friendly Part 1: Stop Hitting the BottleneckBeautiful, Yet Friendly Part 2: Maximizing Efficiency by Guillaume Provost A couple of years ago I was driving home to Quebec when I stopped near the Ontario border to gas up. I got out of my car to stretch and noticed two other travelers engaged in a complicated mish-mash of hand waving and broken English. If I found the situation amusing at the time, I've since come to realize that specialized jargons aren't so different from languages as different as French and English. Game development studios comprise numerous different professions, each with their respective jargons. As any experienced game artist knows, dealing with a disgruntled graphics programmer mumbling about "vertex diets" isn't the most enthralling part of the day. But in the end, a programmer's job isn't to make a good-looking game, it's to empower the artists to make a good- looking game. It’s Not Art’s Fault, It’s Level Design’s! FIGURE 1. Murphy's Law FIGURE 2.

Advanced renderbump and normal map baking in Blender 3D from high poly models Normal maps are essentially a clever way of 'faking', on low poly, low detailed models, the appearance of high resolution, highly detailed objects. Although the objects themselves are three dimensional (3D), the actual part that 'fakes' detail on the low resolution mesh is a two dimensional (2D) texture asset called a 'normal map'. What are normal maps and why use? ^ The process of producing these normal maps is usually referred to as 'baking' (or 'render to image'), whereby an application - in this instance Blender 3D - interprets the three dimensional geometrical structure of high poly objects as RGB ("Red", "Green" & "Blue") values that can then be 'written' as image data, using the UVW map of a low resolution 'game' model as a 'mask' of sorts, telling the bake process where that colour data needs to be drawn. Generally speaking, there are two ways to generate these types of baked normal maps using 3D; renderbump renderbumpflat Low poly version of the control cage. Mirrored UVW's ^

Blender Basics optimising models for export and use in games Previously we learned how Blenders interfaces is divided into working 'zones', how to navigate and move around the interface and then how to make a model and apply UVW maps as we progressed through each section of the tutorial series to make a simple chair. For the next and final section, we'll be looking in to one of the most essential, but least discussed, 'skills' of making 3D content - how to optimise it for use in a game or interactive environment (3D chat, game, virtual world and so on). If you've jumped ahead to this final section of the Blender Basics tutorial then it's assumed you know how to use Blender and where all the buttons and shortcuts are. If you don't it's recommended that you read through the entire tutorial to get to grips with Blender before tackling this part of the process. The Golden rule of optimising ^ "Less is more" What does this mean? Two visually identical mesh objects in Blender As it happens, they're not. "Just because you can, doesn't mean you should"

Sculptris Focus as an artist on pure creativity Enter Sculptris, a fun and engaging way to start off your digital sculpting journey! If you're new to the world of digital sculpting, Sculptris is the ideal ground on which to get started. If on the other hand you're experienced in CG, we offer you ZBrush. With our award-winning software, ZBrush, released more than a decade ago, Pixologic, makers of ZBrush and Sculptris, has become recognized for bringing ground-breaking innovations into the world of digital art. Sculptris Artist: Taron Baysal Sculptris Artist: Barry Croucher Sculptris provides an excellent gateway into the exciting world of 3D. Take your art to the next level ZBrush is the most widely-used digital sculpting application in today's market and is the industry Standard. When you're ready to take art to the next level, the skills that you've learned in Sculptris easily translate to ZBrush. Explore the World of Sculptris

Normalmaps for the Technical Game Modeler Normalmaps for the Technical Game ModelerBy Ariel Chai, 15th of June 2010, all rights reserved.*Article is constant work in progress*This article is aimed towards technical modeling (such as weapons vehicles, pros, etc), and is made to give an overview of common normalmap issues, walkarounds and solutions. This article assumes knowledge of UV's, and the core idea of what normalmaps are. Theory : Implementation :2.1 Obtaining Clean Results Using Hybrid mapsNormalmaps are baked differently depending on object's smoothing. Each method has its issues and therefore we want to mix them to produce good maps. The theoretical walkaround to this problem, is to add more geometry to the edges - which makes them smoother, and lead to more accurate smoothing results by the realtime renderer. Although this walkaround is useful for objects with a few problematic areas - on objects with a lot of sharp edges the polycount overhead is tremendous and overcomplicates things.

Manual: Unity Manual Unity is made to empower you to create the best interactive entertainment or multimedia experience that you can. This manual is designed to help you learn how to use Unity, from basic to advanced techniques. It can be read from start to finish or used as a reference. If you find that any question you have is not answered in this manual please ask on Unity Answers or Unity Forums. You will be able to find your answer there. For information about upgrading projects from Unity 4 to Unity 5, see our Upgrade Guide here. Overview This section is your key to getting started with Unity. Editor Working with the panels, tabs and views of the Unity Editor. Graphics The visual side of Unity including Cameras and Lighting. Physics Physics in Unity, including working with rigid bodies and manipulating them in 3D space. Scripting Programming your games by using Scripting in Unity. Audio Audio in Unity, including clips, sources, listeners, importing and sound settings. Navigation Architecture Platform Specific

NormalMap What is a Normal Map? A Normal Map is usually used to fake high-res geometry detail when it's mapped onto a low-res mesh. The pixels of the normal map each store a normal, a vector that describes the surface slope of the original high-res mesh at that point. The red, green, and blue channels of the normal map are used to control the direction of each pixel's normal. When a normal map is applied to a low-poly mesh, the texture pixels control the direction each of the pixels on the low-poly mesh will be facing in 3D space, creating the illusion of more surface detail or better curvature. Tangent-Space vs. Normal maps can be made in either of two basic flavors: tangent-space or object-space. Tangent-space normal map Predominantly-blue colors. Maps can be reused easily, like on differently-shaped meshes. Maps can be tiled and mirrored easily, though some games might not support mirroring very well. Easier to overlay painted details. Easier to use image compression. Object-space normal map