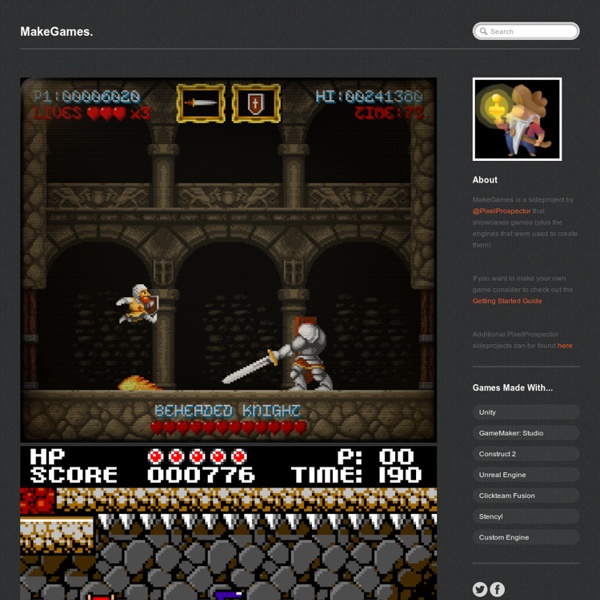 White Whale Games :: Gallery God of Blades Wallpapers- click for 1920 x 1220 God of Blades lost novel covers - God of Blades is more than just a sidescrolling adventure. The game is conceived as a re-interpretation of a series lost 1940s-1970s paperpack novels that once formed a rich fantasy universe but have been erased from our collective memory. Screenshots (click on the thumbnail for full image) Concept art © 2012 White Whale Games. Lars Doucet's Blog - Flash is dead, long live OpenFL! I've been a stalwart Flash developer for 15 years, so nothing bothers me more than greatly exaggerated reports of Flash's premature demise. Even today, Flash remains a very viable platform with a large install base and a relatively healthy commercial ecosystem. Many awesome games have been written in Flash and/or Adobe AIR, including our own Defender's Quest, which to date has sold over 125,000 copies. But even a long-time Flash booster like myself can read the signs of the time. They dropped support for the mobile flash player as well as AIR on Linux, handed Flex over to Apache, and cancelled the long-awaited ActionScript 4 standard. So where do we go from here? I've learned my lesson -- whatever my next platform is, no-one should be able to take it away from me. I could try HTML5, but that precludes releasing high-performance desktop-ready games for Steam. I need something open-source, so I don't have to wait months or years for basic features or bugfixes. What's that you say? Nice!

Epic Announces Dramatic Changes To Unreal Engine 4 By John Walker on March 19th, 2014 at 4:30 pm. Update: Now with trailer. Epic has announced today that Unreal Engine 4 is to dramatically change its licensing model. From now on anyone can subscribe to Unreal Engine 4 for $19 a month, and then release those games commercially for a 5% gross revenue share with the developer. Epic gathered together a bundle of games journalists, fed us coffee and donuts, and sat us down to tell us big news about the Unreal Engine. But bigger, there’s a new business model to reveal. For that $19 you get access to everything, with PC and Mac tools, exporting to PC, Mac, iOS and Android. This is a dramatic change from their previous models with the Unreal Engine, where usually developers would have to pay millions of dollars to license it for their project. From now on, Epic say, their source code changes for each of their new games will be available for everybody to see, all the time. This seems like a properly big deal.

Baker Street: Roleplaying in the World of Sherlock Holmes by Fearlight Games Thank you everyone! Your pledges have made the Baker Street RPG possible. We really appreciate all of your support! We will be providing regular updates here on Kickstarter as well as on Facebook! Please follow Fearlight on Facebook for all the latest news! www.facebook.com/FearlightGames Additionally, for those of you that may not have been able to support the project here on Kickstarter, a new Fearlight Games website will be launching very soon. Intrepid investigators are asked by the stoic Dr. Baker Street is a Role Playing Game in which the players attempt to solve some of the most baffling crimes in history. Some of the unique features of Baker Street are The Sherlock Die, Investigation Scenes, Clue Cards, Social Status, and the Threat Meter. The Sherlock Die The Sherlock Die is a special die that is rolled with every roll in the game. An example roll using one of our laser engraved Sherlock Dice that has icons based on Sidney Paget artwork. Investigation Scenes Unlocked!

Arcade Game Studio PopCap Games Framework v1.3 download The PopCap game framework, named SexyApp Framework, is a flexible high-level library that provides commonly required functions and reusable components, designed to facilitate rapid development of high-quality games. read more + © Copyright 2005-2009 PopCap Games, Inc. All rights reserved. Redistribution and use of this software in source or binary forms, with or without modification, are permitted provided that the following conditions are met: 1. 2. "This product includes portions of the PopCap Games Framework, © 2005-2009 PopCap Games, Inc. Alternatively, this acknowledgment may appear in the work itself, wherever such third-party acknowledgments normally appear. 3. 4.

Prism Online - Development Blog So a few of you have expressed that our progress is slow, or that it looks like Prism has died. Au contraire! This is far from the truth. Yes, progress is slow, but we are in no way dead. What the issue has been is team size. Right now, our team is incredibly small, and while a few people taking some time off for school or other real life things wouldn't show in a large team, with our small team, a few people taking time off means that there are just that many fewer people working on the game. But there's some good news! So what can you do to help us? Anyway, we'd love to expand our team so tell us what you're good at!

The Best Game Engines for Indie Game Developers | Gavalakis Vaggelis People very often want to make a game either for fun or to sell it later. Very often small teams are made and begin the discussion about their new game. It has happened to me before many times and where I utterly disagreed with others, was in the subject of choosing a game engine. Most offen, the programmer or programmers of the team decide they make their own game engine. I personaly believe that the people in any game project should consider their goals. In conclusion there are many game engine for a team to consider using. Unity3D Unity is probably the best choice for indie developers right now, that want a multiplatform development without complications. Unity Indie is free though it’s missing many features, while Unity Pro costs 1500$. GameStart3D Gamestart3D seems a nice choice. Shiva 3D Stonetrip Shiva3D is commonly compared to Unity for their similarities in way of use and price. Shiva PLE is free but to publish a game there are two licenses with very few differences. GameCore 2.5

La petite fabrique de jeu vidéo The 10 Best Game Engines of This Generation Anvil Engine As Seen In: Assassin's Creed, Prince of Persia, Shaun White Snowboarding, Assassin's Creed II Somewhere along the line Ubisoft must have got really sick and tired of using other developers' tech, as there has been an explosion in quality in-house engines coming out of the publisher in recent times. This includes Dunia (Far Cry 2), LEAD (Splinter Cell: Conviction), Fox (Naruto: Broken Bond), LyN (Beyond Good & Evil 2), IRISZOOM (R.U.S.E) and Anvil, aka the Scimitar 2.0 Engine. But for sheer oomph it is hard to go past the Anvil which helped drive Assassin's Creed to one of the most successful new IP debuts in video game history. For both Assassin's and Prince of Persia, it was the way Anvil allowed the animations and the environment to interact in real-time which shone so elegantly. Click here to see just how incredible Assassin's Creed II looks in IGN's video preview. EGO Engine Click here to see EGO deliver the next generation of rally games with DiRT 2. Geo-Mod Engine

n64js - An N64 Emulator in Javascript Status Some early N64 games are running now, and the framerate is improving steadily. Here's a rough feature matirx showing what's been implemented: Supported Browsers I did some quick testing on OSX 10.8: WebGL is required, which places certain restrictions on which GPUs the emulator will work with. Tweet me if you have any additional info. Known Issues There's lots of issues right now with slow performance, graphics glitches, unsupported opcodes, emulation bugs. Controls Origins n64js is based on Daedalus, an emulator I started writing while I was at university under a pseudonym of StrmnNrmn. Thanks Jan-Christoph Borchardt - better keyboard mapping for QWERTZ keyboards.