Make Games! The 10 Best Game Engines of This Generation. Anvil Engine As Seen In: Assassin's Creed, Prince of Persia, Shaun White Snowboarding, Assassin's Creed II Somewhere along the line Ubisoft must have got really sick and tired of using other developers' tech, as there has been an explosion in quality in-house engines coming out of the publisher in recent times. 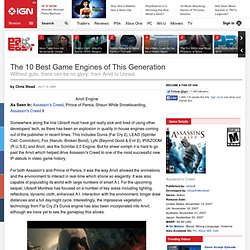 This includes Dunia (Far Cry 2), LEAD (Splinter Cell: Conviction), Fox (Naruto: Broken Bond), LyN (Beyond Good & Evil 2), IRISZOOM (R.U.S.E) and Anvil, aka the Scimitar 2.0 Engine. But for sheer oomph it is hard to go past the Anvil which helped drive Assassin's Creed to one of the most successful new IP debuts in video game history. For both Assassin's and Prince of Persia, it was the way Anvil allowed the animations and the environment to interact in real-time which shone so elegantly. Click here to see just how incredible Assassin's Creed II looks in IGN's video preview. EGO Engine Click here to see EGO deliver the next generation of rally games with DiRT 2. The Best Game Engines for Indie Game Developers. People very often want to make a game either for fun or to sell it later. 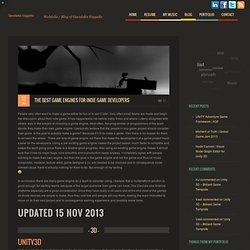 Very often small teams are made and begin the discussion about their new game. It has happened to me before many times and where I utterly disagreed with others, was in the subject of choosing a game engine. Most offen, the programmer or programmers of the team decide they make their own game engine. I personaly believe that the people in any game project should consider their goals. Is the goal to actually make a game? In conclusion there are many game engine for a team to consider using. Unity3D Unity is probably the best choice for indie developers right now, that want a multiplatform development without complications. 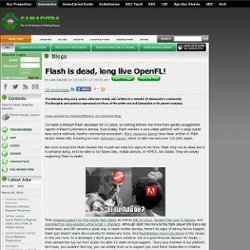 Even today, Flash remains a very viable platform with a large install base and a relatively healthy commercial ecosystem. Many awesome games have been written in Flash and/or Adobe AIR, including our own Defender's Quest, which to date has sold over 125,000 copies. But even a long-time Flash booster like myself can read the signs of the time. Flash may not be dead, but it is certainly dying, and the killer is not Steve Jobs, mobile devices, or HTML5, but Adobe. They are slowly neglecting Flash to death. They dropped support for the mobile flash player as well as AIR on Linux, handed Flex over to Apache, and cancelled the long-awaited ActionScript 4 standard.

So where do we go from here? I've learned my lesson -- whatever my next platform is, no-one should be able to take it away from me. What's that you say? Don't believe me? Haxe - the language layer. PopCap Games Framework v1.3 download. The PopCap game framework, named SexyApp Framework, is a flexible high-level library that provides commonly required functions and reusable components, designed to facilitate rapid development of high-quality games. read more + © Copyright 2005-2009 PopCap Games, Inc. 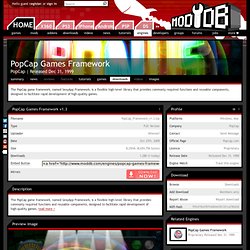 All rights reserved. Redistribution and use of this software in source or binary forms, with or without modification, are permitted provided that the following conditions are met: 1. Redistributions of source code or derived libraries, whether source code or binary, must include a copy of this PopCap Games Framework License in its entirety. Project Anarchy. Epic Announces Dramatic Changes To Unreal Engine 4. By John Walker on March 19th, 2014 at 4:30 pm. 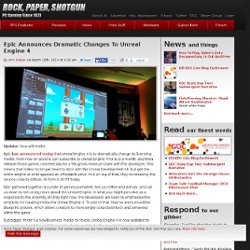 Update: Now with trailer. Epic has announced today that Unreal Engine 4 is to dramatically change its licensing model. From now on anyone can subscribe to Unreal Engine 4 for $19 a month, and then release those games commercially for a 5% gross revenue share with the developer. This means that indies no longer need to stick with the Unreal Development Kit, but get the entire engine at what appears an affordable price. And on top of that, they’re releasing the source code to Github. Epic gathered together a bundle of games journalists, fed us coffee and donuts, and sat us down to tell us big news about the Unreal Engine. Apportable - Objective-C for Android.