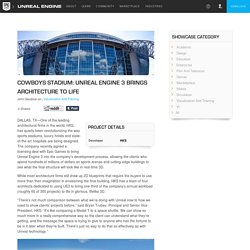 The company recently signed a licensing deal with Epic Games to bring Unreal Engine 3 into the company’s development process, allowing the clients who spend hundreds of millions of dollars on sports arenas and cutting-edge buildings to see what the final structure will look like in real-time 3D. While most architecture firms still draw up 2D blueprints that require the buyers to use more than their imagination in envisioning the final building, HKS has a team of four architects dedicated to using UE3 to bring one-third of the company’s annual workload (roughly 60 of 300 projects) to life in glorious, lifelike 3D. 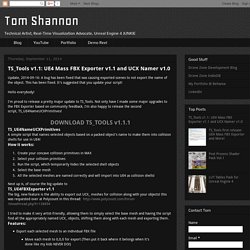 This has been fixed. Unreal Revit. Originally Posted by czoogWe're currently developing our Revit to UE4 workflow are having a some decent success. 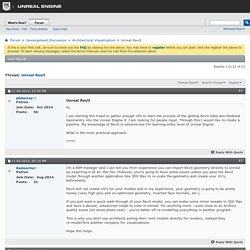 It's not simple by any means, but we are able to reuse the geometry, generate collision hulls, and light map UV's on the fly. We do take everything through Max right now and making regular UV's are definitely the bottle neck at the moment.........Hi guys, I'm also trying to take the jump and figure out a pipeline for revit>ue4. I've had the same experiences as Czoog. Learn 3d Arch Viz Using 3dsMax, Vray and Unreal Engine. Where do you get free obj models or fbx to use in UE4 for commercial? Some you do some you don't.Renderosity does sell items but there is a ton of free stuff also available in a lot of different formats.You can search under free stuff > whats new. 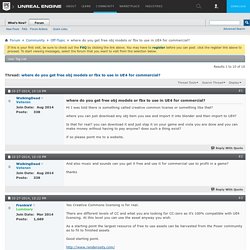 Under whats new just type in the search box what you are looking for. UDK Landscape Tutorials Video 1 Using Terresculptor. Should I make my terrain in UE4 or in a program like 3DsMax? Landscape Tutorial with Vue and Unreal Engine 4 Import Vue Landscape into UE4. Vue Series - Terrains to UE4. Approved for Versions:All Welcome to the first part in my Vue Series of tutorials. 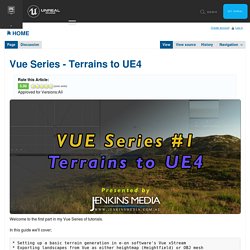 In this guide we'll cover; World Machine / E-on Vue to UE4. Hello,I created a thread a few days ago for a project I have to create a map like the one linked below. 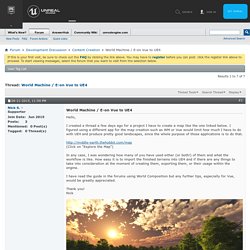 I figured using a different app for the map creation such as WM or Vue would limit how much I have to do with UE4 and produce pretty good landscapes, since the whole purpose of those applications is to do that. (Click on "Explore the Map")In any case, I was wondering how many of you have used either (or both!) Of them and what the workflow is like. How easy it is to import the finished terrains into UE4 and if there are any things to take into consideration at the moment of creating them, exporting them, or their usage within the engine.I have read the guide in the forums using World Composition but any further tips, especially for Vue, would be greatly appreciated.Thank you! FBX 2014 Conversion Help for Unreal Engine 4.2 FBX 2014 Support? Importing Models into UE4. When you save a model in the UE4 version of the Modeler (or use the compiler for custom licensees), you should have a .srt file that represents your model. 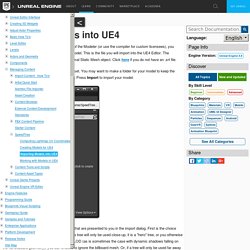 This is the file you will import into the UE4 Editor. The SpeedTree model will be imported into a normal Static Mesh object. Click here if you do not have an .srt file. Import the .srt file as you would any other asset. Scape: 5. Overview and downloads. Helpful tools/programs list. Since I've found a few cool things I thought I would compile a list. 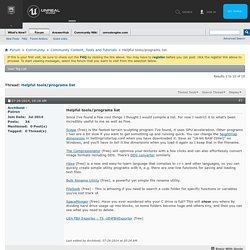 For now I restrict it to what's been incredibly useful to me as well as free.Scape (free) is the fastest terrain sculpting program I've found, it uses GPU acceleration. Other programs I feel are a bit slow if you want to get something up and running quick. You can change the heightmap dimensions in Settings\startup.conf when you have downloaded it. Save as "16-bit RAW (Intel)" on Windows, and you'll have to tell it the dimensions when you load it again so I keep that in the filename.The Compressonator (free) will optimize your textures with a few clicks and can also effortlessly convert image formats including DDS. 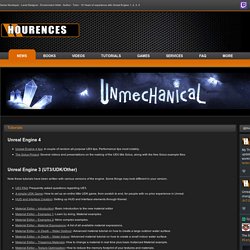 Performance tips most notably. The Solus Project: Several videos and presentations on the making of the UE4 title Solus, along with the free Solus example files. Unreal Engine 3 (UT3/UDK/Other) Note these tutorials have been written with various versions of the engine. UE3 FAQ: Frequently asked questions regarding UE3. The hidden tools of Game Developement. Hey Fellow Unrealer's,I wanted to start a post where everyone can share cool little tools that they might use everyday to help them in development. 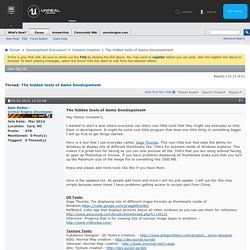 It might be some cool little program that does one little thing or something bigger. I will go first to get things started. Here is a tool that I use everyday called, Sage Thumbs. This cool little tool that adds the ability for Windows to display lots of different thumbnails like .TGA's for example inside of Windows explorer. SketchUp to Unreal Engine -1- [Exporting Principles] Unreal Engine 4 Tutorial - Sketchup Export 2. Getting Models from SketchUp to UE4.

Unreal Engine 4 : How to import Sketchup model into unreal Engine 4. A whole game without any C++ / just with Blueprints? Hm, is it possible is a good question. Introduction to Blueprints. Blueprints are special assets that provide an intuitive, node-based interface that can be used to create new types of Actors and script level events; giving designers and gameplay programmers the tools to quickly create and iterate gameplay from within Unreal Editor without ever needing to write a line of code. For more detailed overview information about Blueprints, including types of Blueprints, Blueprint anatomy, and a discussion of how Blueprints relate to UE3's Kismet and UnrealScript, see Blueprint Overview. How Do Blueprints Work? In their basic form, Blueprints are visually scripted additions to your game. By connecting Nodes, Events, Functions, and Variables with Wires, it is possible to create complex gameplay elements. Blueprints work by using graphs of Nodes for various purposes - object construction, individual functions, and general gameplay events - that are specific to each instance of the Blueprint in order to implement behavior and other functionality.

Getting started with the new unreal engine version and developing small stuff for the vive. Is there any fresh tutorials that teach you how to get going with teleportation and interaction? : SteamVR. About Unreal Engine 4. If You Love Something, Set It Free. Unreal Engine 4 is now available to everyone for free, and all future updates will be free! You can download the engine and use it for everything from game development, education, architecture, and visualization to VR, film and animation. When you ship a game or application, you pay a 5% royalty on gross revenue after the first $3,000 per product, per quarter. It’s a simple arrangement in which we succeed only when you succeed. This is the complete technology we use at Epic when building our own games. It scales from indie projects to high-end blockbusters; it supports all the major platforms; and it includes 100% of the C++ source code.

Develop in the Unreal Ecosystem Beyond the tools and source, Unreal Engine 4 provides an entire ecosystem. To help you get started, the engine includes a large number of video tutorials and documentation, as well as ready-made game templates, samples, and content. Epic Launches Unreal Dev Grants. Tim Sweeney on February 19, 2015 | Tags communitynews Since Unreal Engine 4’s launch, we’ve been amazed at the groundswell of cool projects in development by the Unreal community. One thing we’ve heard many times: While development can be fueled by creativity and determination alone, finishing and releasing a commercial project often requires money. We know this firsthand, as Epic’s early projects were built on shoestring budgets funded by such sources as Tim Sweeney’s lawn-mowing earnings, and Mark Rein’s credit card (before they took it away from him!). A small budget can make all the difference in shipping a project with the content, marketing materials, and promotional expenses necessary for it to gain traction.