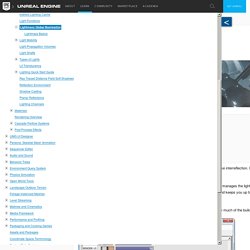 It is used to precompute portions of the lighting contribution of lights with stationary and static mobility. Communication between the editor and Lightmass is handled by the Swarm Agent, which manages the lighting build locally and can also distribute the lighting build to remote machines. The Swarm Agent, which opens minimized by default, also tracks lighting build progress and keeps you up to date with which machines are working for you, what they are working on, and how many threads each one is using. A sample image of the Swarm Agent is pictured below (the bar near the bottom shows how much of the build is complete). Features for Static and Stationary lights Diffuse Interreflection. Light Propagation Volumes GI. Approved for Versions:(please verify) Light Propagation Volumes (LPV) are currently implemented as a Work in Progress feature! 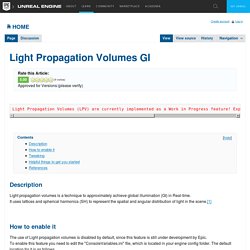 Expect bugs and flaws while working with them! Description Light propagation volumes is a technique to approximately achieve global illumination (GI) in Real-time. It uses lattices and spherical harmonics (SH) to represent the spatial and angular distribution of light in the scene.[1] How to enable it. Light Propagation Volumes. How to enable Light Propagation Volumes GI [ WIP AND BETA] - Page 2. Originally Posted by EVILCan this lighting be influenced with a texture? 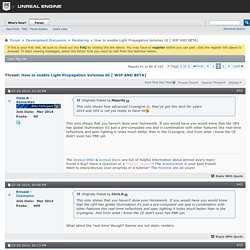 Like can I somehow have a texture emit light? This is doable, but removed for now. Mostly I suspect because of the aforementioned lightleak problems. Which should be fixable to the extent that it'll be acceptable Originally Posted by AtleI´ve used LPV on many large scenes with both fullscreen/standalone gamemode, and only problem has been working with translucent materials, it will bomb out without a warning most of the time, so changing properties on glass/plant/water materials must be done with LPV disabled.Diffuse lighting is doable with translucency and LPV, but the reflections from it are going to require some kind of trick.Regardless, it's good to see this thread getting so much excitement, and this going in as a top priority on the timeline. 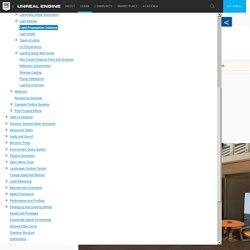 Enabling Light Propagation Volumes To get the feature enabled, put this into ConsoleVariables.ini and (re)start the engine: r.LightPropagationVolume = 1 At the moment, this console variable cannot be changed at runtime. Basic Scene Setup. Unreal Engine. The Sky Light captures the distant parts of your level (everything further than SkyDistanceThreshold) and applies that to the scene as a light. 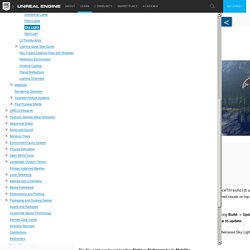 That means the sky's appearance and its lighting / reflections will match, even if your sky is coming from atmosphere, or layered clouds on top of a skybox, or distant mountains. You can also manually specify a cubemap to use. The Sky Light will only recapture the scene when you rebuild lighting or manually tell it to using Build -> Update Reflection Captures or the Recapture Scene button on the Sky Light Actor. If you change the texture that the skybox is using, it will not automatically know to update. Skylight Causes Disco Party Reflections. Screen Space Reflection. SkyLight Linux CentOS7 broken? Sky Lights. The Sky Light captures the distant parts of your level (everything further than SkyDistanceThreshold) and applies that to the scene as a light.

That means the sky's appearance and its lighting / reflections will match, even if your sky is coming from atmosphere, or layered clouds on top of a skybox, or distant mountains. You can also manually specify a cubemap to use. Unreal engine 4 detail lighting skylight rainbow. View Modes. The Unreal Editor viewports have a large number of visualization modes to help you see the type of data being processed in your scene, as well as to diagnose any errors or unexpected results. 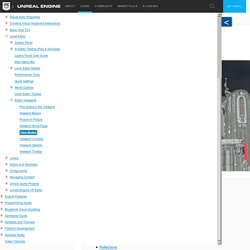 What is the process for getting updates from GitHub? The update process will be different depending on how you acquired the UnrealEngine repository. 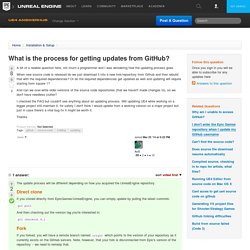 Direct clone If you cloned directly from EpicGames/UnrealEngine, you can simply update by pulling the latest commits: git pull And then checking out the version tag you're interested in: git checkout 4.1 Fork If you forked, you will have a remote branch named origin which points to the version of your repository as it currently exists on the GitHub servers. If you have not already done so, define a new remote branch pointing to Epic's UnrealEngine repo: git remote add upstream. Building On Centos. Forward This guide is being created to help troubleshoot problems that the Unreal Engine is currently having in regards to running on CentOS 7, for those people looking to have official tech support when running professional applications from Autodesk such as Maya. 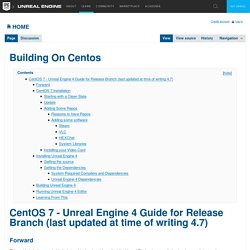 CentOS 7 is the best option, while not currently offically supported yet by Autodesk, Autodesk does have a long history of only providing support for the RedHat distro and recently CentOS. I'd also like to note that this guide is not an official document from Epic on running the Unreal Engine 4 on CentOS 7, but a user created guide to attempt to help this application succeed on Linux in general. Also I'd also like to note -- not all computers are going to be able to run Unreal 4 as a game or editor. Even if you can install Centos 7 x64 on your computer, that doesn't mean your hardware will be power enough to run Unreal 4. CentOS 7 Installation. Building On Linux.

Approved for Versions:(please verify) This page contains information about the effort to build UE4 natively on a Linux host. 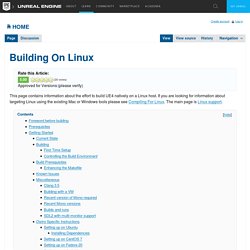 If you are looking for information about targeting Linux using the existing Mac or Windows tools please see Compiling For Linux. Cubiquity for UE4 - Voxel Terrain Plugin. Hi all,I'm Matt from Volumes of Fun, a hobbyist software studio based in Europe. We're probably best known for the open-source C++ voxel management library, PolyVox which is available for commercial use by all for free.On top of PolyVox, we also develop and sell Cubiquity, a 3D engine integration layer. So far, most of our work has been focused on Cubiquity for Unity 3D but we've been fans of Unreal Engine for a long time (since the first game) and so we are now actively working towards getting Cubiquity for UE4 off the ground. For the Unity3D version we provide a completely free version for non-commercial use and a $200 license for use in commercial products.

I imagine we will have similar terms for the UE4 version but this is not set in stone yet.The UE4 plugin is still in early development but can already import Cubiquity VDB files, render smooth terrain with blended tri-planar texturing and create correct physics meshes.