How does the oxygen sensor in a car work?" Every new car, and most cars produced after 1980, have an oxygen sensor. 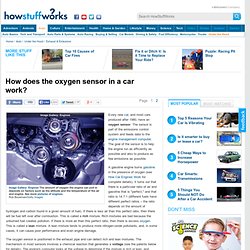 The sensor is part of the emissions control system and feeds data to the­ engine management computer. The goal of the sensor is to help the engine run as efficiently as possible and also to produce as few emissions as possible. ­ A gasoline engine burns gasoline in the presence of oxygen (see How Car Engines Work for complete details). It turns out that there is a particular ratio of air and gasoline that is "perfect," and that ratio is 14.7:1 (different fuels have different perfect ratios -- the ratio depends on the amount of hydrogen and carbon found in a given amount of fuel).

If there is less air than this perfect ratio, then there will be fuel left over after combustion. ­ Th­e oxygen sensor is positioned in the exhaust pipe and can detect rich and lean mixtures. What is the oil pressure sensor? The oil system Inside your car's engine motor oil plays a vital role when it comes to lubricating, cooling and cleaning. 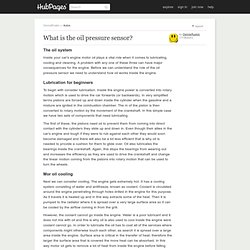 A problem with any one of these three can have major consequences for the engine. Before we can understand the role of the oil pressure sensor we need to understand how oil works inside the engine. Lubrication for beginners To begin with consider lubrication. Zirconia sensor. Ntc temp sensor. MAP Sensor (Manifold Absolute Pressure) Description.

How Hall Effect Sensor works. A Hall Effect sensor is a device that detects the presence of magnetic field. 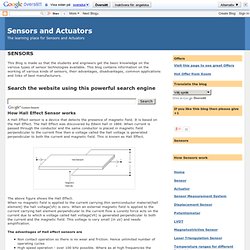 It is based on the Hall Effect. The Hall Effect was discovered by Edwin hall in 1869. When current is passed through the conductor and the same conductor is placed in magnetic field perpendicular to the current flow then a voltage called the hall voltage is generated perpendicular to both the current and magnetic field. This is known as Hall Effect. Knock Sensor. A vehicle knock sensor is a sensor screwed into the engine's block or cylinder head. 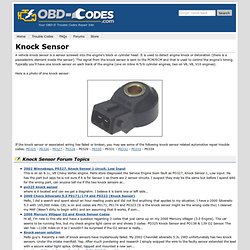 A throttle position sensor (TPS) is a sensor used to monitor the position of the throttle in an internal combustion engine. 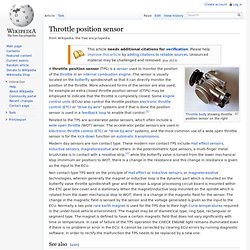 The sensor is usually located on the butterfly spindle/shaft so that it can directly monitor the position of the throttle. More advanced forms of the sensor are also used, for example an extra closed throttle position sensor (CTPS) may be employed to indicate that the throttle is completely closed. Some engine control units (ECUs) also control the throttle position electronic throttle control (ETC) or "drive by wire" systems and if that is done the position sensor is used in a feedback loop to enable that control.[1] Related to the TPS are accelerator pedal sensors, which often include a wide open throttle (WOT) sensor.

The accelerator pedal sensors are used in electronic throttle control (ETC) or "drive by wire" systems, and the most common use of a wide open throttle sensor is for the kick-down function on automatic transmissions. See also[edit] Notes[edit] Fuel pressure sensor. What is a FPS? 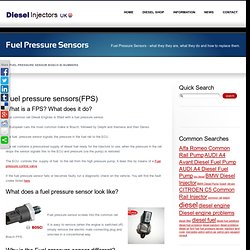 What does it do? Your common rail Diesel Engines is fitted with a fuel pressure sensor. In European cars the most common make is Bosch; followed by Delphi and Siemens and then Denso. What Is a Cam Sensor for a Car? - Ask Jeeves. Link Engine Management - Air Temperature Sensors — Link Engine Management Systems - plug-in & wire-in aftermarket ECU's. This is a critical sensor for forced air applications or where optimum engine operation is required. 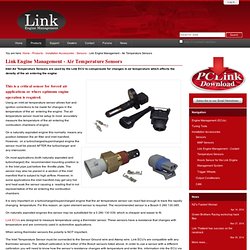 Using an inlet air temperature sensor allows fuel and ignition corrections to be made for changes in the temperature of the air entering the engine. PTC temp sensor. How Does a Crank Sensor Work? - Ask Jeeves.