Real Time Farms - Know Where Your Food Comes From 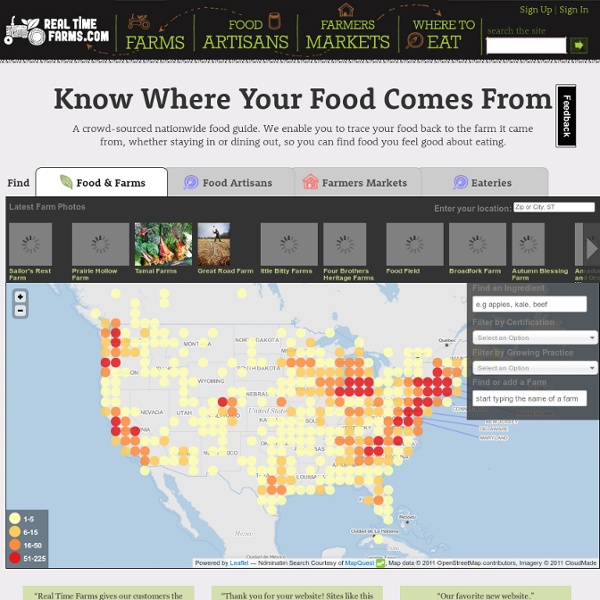 Open Culture The Dirt on Organics: Essential Answer - January/February 2013 By Anna Hallingstad, Lindley Mease, Priya Fielding-Singh, Chad La Tourette and Isabella Akker I've heard news reports about a Stanford School of Medicine study that found organic foood isn't any healthier than conventionally grown food. If that's the case, is it worth paying the premium price? — Anonymous Grocery stores these days offer us a lot of choice. The study sought to compare the health effects of organic and conventional foods, focusing in nutrient and contaminant levels. The researchers compiled 237 studies addressing the nutritional benefits of organic and conventionally grown foods. Nutritionally, the Stanford team found few differences. These differences in what isn’t in organic food were largely overshadowed in the initial press release and by media outlets that first reported on the study. Besides, it’s not at all clear that the Stanford study is conclusive when it comes to nutrient content. In the meantime, the drawbacks of conventional food are clear.

The People's Book Project NOVA Can Wind Turbines Make You Sick? Residents living in the shadows of wind turbines say the sound is making them sick. But so far the science isn't there. From NOVA Next | Jun 27, 2018 Thirty Years Ago Today, Global Warming First Made Headline News On June 23, a NASA climate scientist, James Hansen, told a U.S. From NOVA Next | Jun 23, 2018 New Middle Eastern Particle Accelerator’s Motto is “Science for Peace” In a region in turmoil, an unprecedented joint venture of scientists and policymakers is working together on Jordan’s new particle accelerator under the motto "science for peace." From NOVA Next | Jun 21, 2018 Psychological Damage Inflicted By Parent-Child Separation is Deep, Long-Lasting Here's what happens in the brain and the body when a child is forcibly separated from his or her parents.

Occupy Wall Street | NYC Protest for World Revolution Solve Puzzles for Science | Foldit Hey everyone! I will be leading a Science Café about Foldit at the Southpaw Social Club, in San Diego, on April 28. The purpose of the event is to engage with the community in a casual, comfortable setting to talk about the exciting science of protein folding and the Foldit computer game. We're very excited about this opportunity to share Foldit in such a personable format! The event is free and registration is not required.