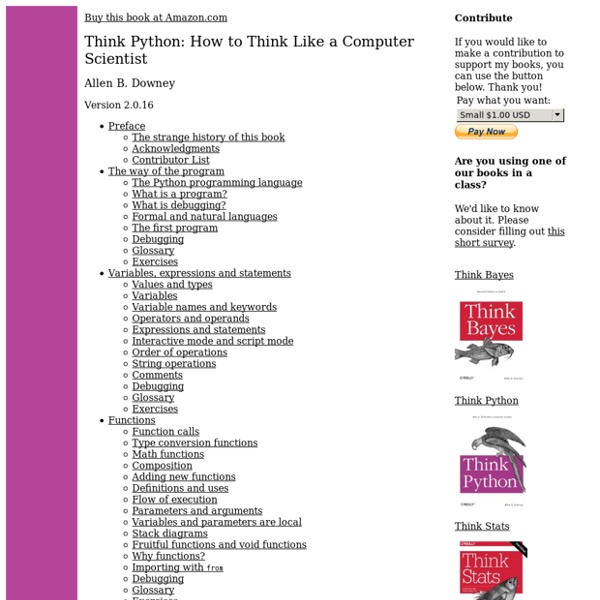 Runestone Interactive More Information What is Runestone? How can you use and contribute to what we offer? To learn more about this project, see this overview. For more information about the whole Runestone Interactive community and project, including how to contribute, please click here! Support Us Python Cheat Sheet String String Methods Array 2nd Ed - How to Think Like a Computer Scientist Learning with Python by Allen Downey, Jeff Elkner and Chris Meyers. This book is now available for sale at Lulu.com. Hardcopies are no longer available from Green Tea Press. How to Think... is an introduction to programming using Python, one of the best languages for beginners. How to Think... is a Free Book available under the GNU Free Documentation License.

Think Python Think Python is a concise introduction to software design using the Python programming language. Intended for people with no programming experience, this book starts with the most basic concepts and gradually adds new material. Some of the ideas students find most challenging, like recursion and object-oriented programming, are divided into a sequence of smaller steps and introduced over the course of several chapters. The focus is on the programming process, with special emphasis on debugging.

s Python Class - Educational Materials Welcome to Google's Python Class -- this is a free class for people with a little bit of programming experience who want to learn Python. The class includes written materials, lecture videos, and lots of code exercises to practice Python coding. These materials are used within Google to introduce Python to people who have just a little programming experience. The first exercises work on basic Python concepts like strings and lists, building up to the later exercises which are full programs dealing with text files, processes, and http connections.

10. Brief Tour of the Standard Library — Python v2.7.5 documentation 10.1. Operating System Interface The os module provides dozens of functions for interacting with the operating system: >>> import os>>> os.getcwd() # Return the current working directory'C:\\Python26'>>> os.chdir('/server/accesslogs') # Change current working directory>>> os.system('mkdir today') # Run the command mkdir in the system shell0 Be sure to use the import os style instead of from os import *. This will keep os.open() from shadowing the built-in open() function which operates much differently.

3rd ed - Think Python: How to Think Like a Computer Scientist How to Think Like a Computer Scientist by Allen B. Downey This is the first edition of Think Python. It uses Python 2, with notes on differences in Python 3. Style Guide for Python Code Code should be written in a way that does not disadvantage other implementations of Python (PyPy, Jython, IronPython, Cython, Psyco, and such).For example, do not rely on CPython's efficient implementation of in-place string concatenation for statements in the form a += b or a = a + b. This optimization is fragile even in CPython (it only works for some types) and isn't present at all in implementations that don't use refcounting. In performance sensitive parts of the library, the ''.join() form should be used instead. This will ensure that concatenation occurs in linear time across various implementations.Comparisons to singletons like None should always be done with is or is not, never the equality operators.Also, beware of writing if x when you really mean if x is not None -- e.g. when testing whether a variable or argument that defaults to None was set to some other value. The other value might have a type (such as a container) that could be false in a boolean context!