Learn Web Development with the Ruby on Rails Tutorial 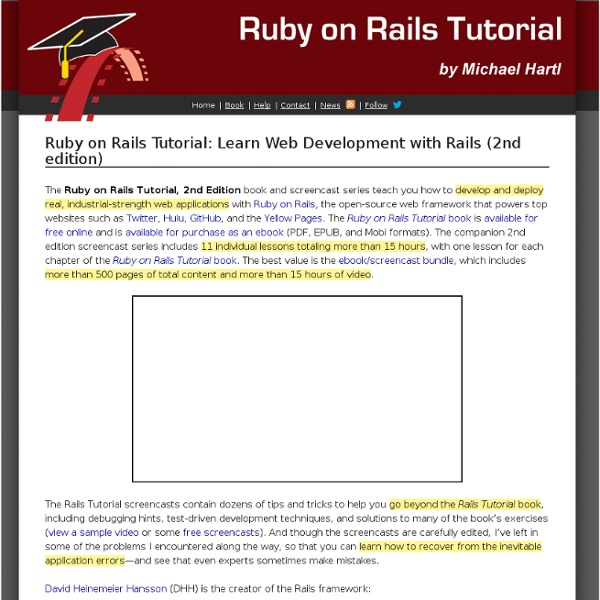 About HTML semantics and front-end architecture A collection of thoughts, experiences, ideas that I like, and ideas that I have been experimenting with over the last year. It covers HTML semantics, components and approaches to front-end architecture, class naming patterns, and HTTP compression. We shall not cease from exploration And the end of all our exploring Will be to arrive where we started And know the place for the first time. How I Learned Enough Ruby On Rails In 12 Weeks To Launch Freelancify (Update February 26, 2013: I have since this post sold Freelancify.com to a new owner) Before I begin, I’d like to recognize Josh Crews ( for convincing me to learn Ruby on Rails; without him and his hours of volunteered mentership and help, I wouldn’t be writing this today. Thank you. I’d also like to address Please do not email me asking me to program your app for equity. I am not interested.

Getting started with Heroku Getting started with Heroku This guest post is by Ben Scofield, who is Heroku’s developer advocate, responsible for listening to the tens of thousands of developers deploying their Ruby applications to the cloud. He’s spoken at many conferences around the world, and in 2010 became the co-chair for RailsConf. Introduction Heroku has been in the news a lot lately, and it’s been a popular choice for Ruby application developers for a few years.If you haven’t worked with it before, here’s your chance — it’s designed to be as painless as possible to get going, and to give a powerful, stable, and scalable platform for your code. Setting up

Bezier curves - a primer Preface In order to draw things in 2D, we usually rely on lines, which typically get classified into two categories: straight lines, and curves. The first of these are as easy to draw as they are easy to make a computer draw. Book - Scalable and Modular Architecture for CSS I have long lost count of how many web sites I’ve built. You would think after having built a few hundred of them I would have discovered the “one true way” of doing it. I don’t think there is one true way. What I have discovered are techniques that can keep CSS more organized and more structured, leading to code that is easier to build and easier to maintain. OmniAuth: Ruby Authentication Framework What is Omniauth? The web application landscape has changed drastically in the past few years. Most users login in to dozens, sometimes hundreds of services each day; sites are no longer silos unto themselves and cannot reasonably expect users to create a unique login and password for each service. This is where OmniAuth comes in.

String str % arg → new_str click to toggle source Format—Uses str as a format specification, and returns the result of applying it to arg. If the format specification contains more than one substitution, then arg must be an Array or Hash containing the values to be substituted. See Kernel::sprintf for details of the format string. static VALUE rb_str_format_m(VALUE str, VALUE arg) { volatile VALUE tmp = rb_check_array_type(arg); if (!NIL_P(tmp)) { return rb_str_format(RARRAY_LENINT(tmp), RARRAY_PTR(tmp), str); } return rb_str_format(1, &arg, str); }