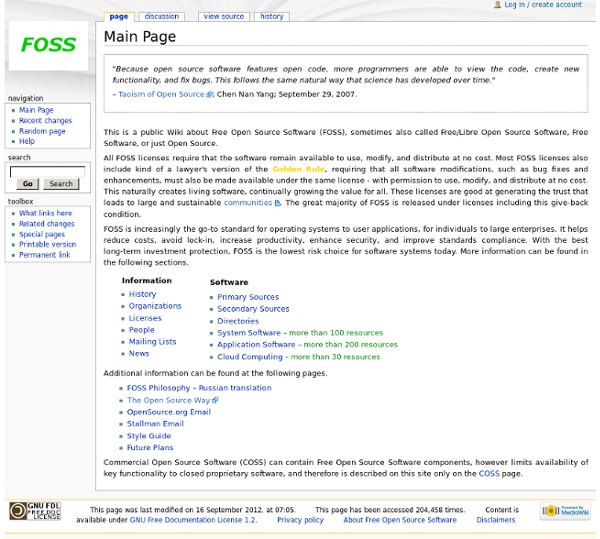 Protege Wiki 100+ awesome free and open source applications - Software - Seopher.com Posted on Tuesday 27th of September 2011 at 13:05 in SoftwareIt has always amazed me quite how many incredible, varied and useful applications are available for free on the Internet. Be it free, open source, web-based or merely passive trials - the number of top quality items on offer is huge. The purpose of this list is to help people realise that the free and open source software communities are expansive and generous. Index - what types of software I cover in this list Image, Image Editing and Graphics Office Web and web development Development Applications (IDE's) Operating Systems Video Playback and Editing Audio Anti-Virus and Security Downloading and Download Managers Remote Access Useful Applications that don't get their own category Communications Servers and Techie Stuff Games Image, Image Editing and Graphics GIMP – The GNU Image Manipulation Program is a Photoshop replacement that doesn’t have "quite" as much functionality but it’s excellent for free. Audio

Free and Open Source for Geospatial Conference Top 5 Vizzes of 2013 Winners 2013 was a great year for Tableau Public; countless amazing vizzes were published. Thanks to you, we were able to narrow it down to the Top 5 of the year! 5.Petco Park is Changing by Ryan Robitaille Ryan's creative, infographic-style viz was your fifth favorite viz of 2013. 4.Every Recorded Meteorite Impact on Earth by Ramon Martinez Ramon showed us that his analytical skills go far beyond public health data with this stunning viz on meteor impacts. 3.Top Movie Directors by Film by Adam McCann Adam's self-proclaimed "stupid" viz was smart enough to grab the third spot in your top 5. 2.Volunteerism in America by Jim Wahl Jim won our Civic Data Viz Contest and a spot in the 2013 Iron Viz with this highly informational viz on volunteering in America. 1.It's a bird, it's a plane... by Kelly Martin Kelly amazed us all with her beautiful remake of a dashboard on bird strikes.

Open Source Initiative non-profit organization promoting open-source software The Open Source Initiative (OSI) is a non-profit organization dedicated to promoting open-source software. The organization was founded in late February 1998 by Bruce Perens and Eric S. Raymond, part of a group inspired by the Netscape Communications Corporation publishing the source code for its flagship Netscape Communicator product. Later, in August 1998, the organization added a board of directors. History[edit] In 2009, the OSI was temporarily suspended from operation as a California corporation, apparently in response to a complaint concerning tax paperwork from earlier years.[14][clarification needed] Its current status is "Active".[15] On November 8, 2013, OSI appointed Patrick Masson as its General Manager.[19] Relationship with the free software movement[edit] Board members[edit] The current Open Source Initiative board of Directors is:[23] Past board members include: See also[edit] References[edit] External links[edit]

Miro - Lecteur libre et gratuit de musique et de vidéos. Welcome to The Apache Software Foundation! Spreading the gospel... ...one data viz nerd at a time. {The following blog post is the latest in the Data Blogging Month series, and is a guest post by Tableau Zen Master and Facebook data viz guru Andy Kriebel. Andy also runs VizWiz, a popular data visualization blog. Andy originally published this blog post on his site here.} Fact: If I didn’t start my blog, I wouldn’t be working at Facebook. When Facebook was looking for people to build out their new Tableau team, naturally they started scouring the web to find people that could make an impact. Back on September 3, 2007, in no less than one hour, I: Ran a Google search for dashboard softwareDownloaded and installed Tableau 3 (people new to Tableau have no idea how good they have it now)Watched the first two intro training videosCreated my first dashboard That one hour changed my life. Almost another two years passed. There was a void, so I created vizwiz.blogspot.com. Naturally, once your blog gains some followers you’ll begin getting feedback.

The Trac Project My Data Blog Story {The following blog post is the latest in the Data Blogging Month series, and is a guest post by Tableau Public author and Team Leader of Supervisory Reporting and Analysis at the Office of the Comptroller of the Currency, Emily Kund. Emily recently launched a data blog section on her website Wannabe Awesome Me, where she also blogs about other topics like fashion and family. Opinions expressed below are the author's own and do not reflect the opinion or viewpoints of her employer.} I had attempted to blog a few years ago, but it just didn't take...I did maybe two posts, a year apart. That's not so great. My First Post As I read over my first post, A Look Back at TCC13, it describes how I feel about the customer conferences. I was resolved this year to not let that happen, at least on a personal level. Some Technical Details On little side note. Inspired by Design Then in October, I was inspired again by Tableau Design Month. Best, Emily