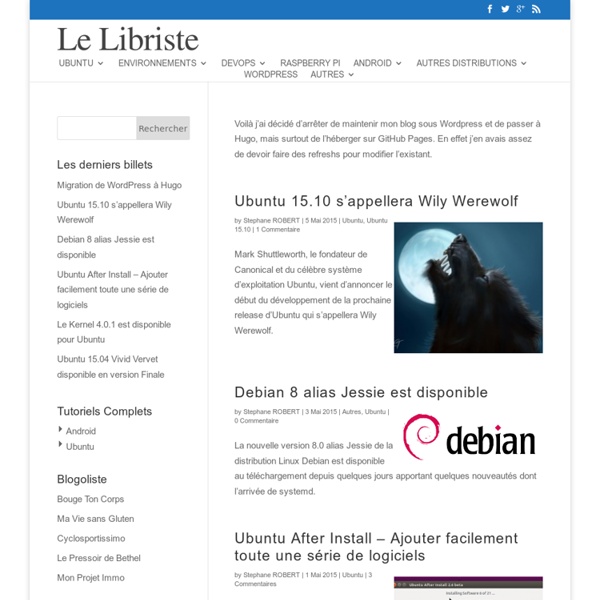 Dual-booting Windows 7 and Ubuntu 10.10 The first partition we create will be for /boot. Most distributions now assign a disk space of 500 MB to /boot. You could go lower. 300 MB to 500 MB is a good range. The default file system is ext4. You do not have to stick with that. Ubuntu 11.04 Boot Performance Compared To Past Releases Now that we have looked at the Ubuntu power consumption going back as far as Ubuntu 8.04 LTS (and found serious power regressions), the next round of testing is providing the Bootchart results for five different systems also going back as far as Ubuntu 8.04 LTS. Following a clean install of each operating system and leaving the system in its clean state with stock settings (and packages) aside from installing Bootchart, the Bootchart result was gathered after two reboots. For all releases it was the time measured to the automatic log-in.

Map the sky and learn about astronomy with Aciqra Aciqra is a great free program for astronomy enthusiasts. It will map the sky for you, act as a virtual planetarium (in 2D) and will even track movement of stellar phenomena like planets and stars or even deep space objects (DSOs), and more. As a kid I had this book about the solar system and the history of the earth. I don’t remember where I got it, exactly, but I remember spending many hours poring over the simple text and endearing images between its battered yellow covers in pure fascination at the data therein. I don’t think I was even ten years old yet at the time but that was my first real indication that I would enjoy astronomy (and occasionally astrology from a sheer curiosity angle) as an interest in later life. I was, therefore, quite pleased to see the URL for Aciqra land on my desk when I learned what the program is meant to do.

Arrow Webzine - StumbleUpon-Mozilla Firefox Google serves almost 80 percent of all search queries on the Internet, proving itself as the most popular search engine. However Google makes it possible to reach not only the publicly available information resources, but also gives access to some of the most confidential information that should never have been revealed. In this post I will show how to use Google for exploiting security vulnerabilities within websites. The following are some of the hacks that can be accomplished using Google. 30 Incredible Examples of Urban Decay Photography During the lifespan of a city, certain events take place that cause buildings and areas to become abandoned. With nobody around to provide upkeep or maintenance on the structures of these areas, things begin to fall into disrepair. This is known as urban decay. At first glance, these decrepit environments may seem hopeless.

Tron Legacy GNOME Shell theme is all kinds of cool There are themes and then there are really freaking cool themes. A great example of the latter is this ‘Tron Legacy’ inspired GNOME Shell theme complete with neon-y highlights and translucent-y hints. Sadly it lacks a dedicated theme for the MCP – but you can’t have it all, right? Howto: Ubuntu Linux convert DHCP network configuration to static IP configuration My friend wanted to know how to change or convert DHCP network configuration to static configuration. After initial installation, he wanted to change network settings. Further, his system is w/o GUI system aka X Windows. Here is quick way to accomplish the same: Your main network configuration file is /etc/network/interfaces Desired new sample settings: => Host IP address 192.168.1.100 => Netmask: 255.255.255.0 => Network ID: 192.168.1.0 => Broadcast IP: 192.168.1.255 => Gateway/Router IP: 192.168.1.254 => DNS Server: 192.168.1.254

A possible naked-eye comet in March by Dr. Tony Phillips, Science@NASA Far beyond the orbits of Neptune and Pluto, where the sun is a pinprick of light not much brighter than other stars, a vast swarm of icy bodies circles the solar system. Astronomers call it the "Oort Cloud," and it is the source of some of history's finest comets. One of them could be heading our way now. Comet Pan-STARRS was discovered by the Panoramic Survey Telescope & Rapid Response System atop the Haleakala volcano in Hawaii.

Wrangler UPDATE: The Stanford/Berkeley Wrangler research project is complete, and the software is no longer actively supported. Instead, we have started a commercial venture, Trifacta. For the most recent version of the tool, see the free Trifacta Wrangler. Why wrangle? Too much time is spent manipulating data just to get analysis and visualization tools to read it.

Free Tutorials for Di Posted on 09. Feb, 2010 by Ash in Articles Learning how to brand your art is part of being a successful digital artist. With so many technologies & softwares available in the digital art field, one might be tempted to have a huge art portfolio with so many different styles. I think its perfectly fine to experiment and learn new technologies, but if you are considering in making a living out of digital art, you would want to eventually settle with a style that would make you stand out of the crowd. Ubuntu Linux Unveiled for Android Phones For years, tech pundits have speculated about the merging of phones and desktop computers, with Motorola's line of Webtop accessories only the latest in a series of products. Now Canonical has stepped in with what could be the most comprehensive attempt yet: Ubuntu for Android, which the company says launches a full desktop OS experience whenever you connect your phone to a computer screen and keyboard. In this mode, Ubuntu works exactly as it does on a regular PC, with the same Unity UI and access to certified applications including Chrome and Firefox—except that your phone is now standing in for a bulky CPU tower. Otherwise, Ubuntu for Android stays invisible; when you're out and about, your phone works just like a normal Android phone. Canonical says that all data and services stay consistent between the Ubuntu and Android environments, including contacts, SMS, and voice calls. Ubuntu for Android will require a multi-core Android phone.

manual-en Overview Description SystemRescueCd is a Linux system available on a bootable CD-ROM that allows you to repair your system and your data after a crash. It also aims to provide an easy way to do administrative tasks on your computer, such as creating and editing the partitions of the hard disk. It contains a lot of system utilities (parted, partimage, fstools, ...) and basic ones (editors, midnight commander, network tools). It aims to be very easy to use: just boot from the CD-ROM, and you can do everything. The kernel of the system supports most important file systems (ext2/ext3, reiserfs, reiser4, xfs, jfs, vfat, ntfs, iso9660), and network ones (samba and nfs).