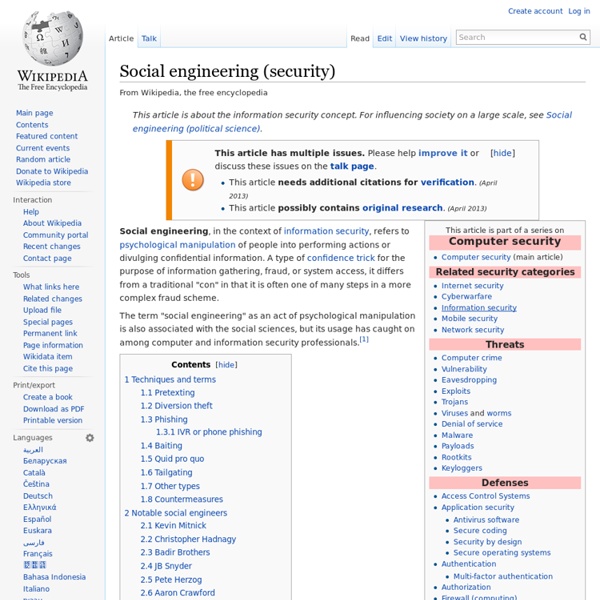 Social engineering, in the context of information security, refers to psychological manipulation of people into performing actions or divulging confidential information. A type of confidence trick for the purpose of information gathering, fraud, or system access, it differs from a traditional "con" in that it is often one of many steps in a more complex fraud scheme. The term "social engineering" as an act of psychological manipulation is also associated with the social sciences, but its usage has caught on among computer and information security professionals.[1] All social engineering techniques are based on specific attributes of human decision-making known as cognitive biases.[2] These biases, sometimes called "bugs in the human hardware", are exploited in various combinations to create attack techniques, some of which are listed. The attacks used in social engineering can be used to steal employees' confidential information. Quid pro quo means something for something: U.S.

Grey goo Grey goo (also spelled gray goo) is a hypothetical end-of-the-world scenario involving molecular nanotechnology in which out-of-control self-replicating robots consume all matter on Earth while building more of themselves,[1][2] a scenario that has been called ecophagy ("eating the environment").[3] The original idea assumed machines were designed to have this capability, while popularizations have assumed that machines might somehow gain this capability by accident. Definition[edit] The term was first used by molecular nanotechnology pioneer Eric Drexler in his book Engines of Creation (1986). Imagine such a replicator floating in a bottle of chemicals, making copies of itself…the first replicator assembles a copy in one thousand seconds, the two replicators then build two more in the next thousand seconds, the four build another four, and the eight build another eight. Drexler describes gray goo in Chapter 11 of Engines Of Creation: Risks and precautions[edit] Ethics and chaos[edit]

10 Ways to Be a More Productive Web Developer We could all be more productive. There are many things we can do — some big, some small — that will enhance the way we work and improve the outcomes of our activities. Although I can’t promise that I’ll be able to help you cure all your productivity ailments, I do hope that I can provide you with a few useful, solid tips on streamlining your web development workflow and making every part of the development cycle move quickly and smoothly. Follow each one of these tips and I can almost guarantee you that you’ll save time, be able to create more and/or better work and be a more productive developer, ready to tackle that next task in half the time it would’ve taken you before. 1. I used to refuse frameworks for web development because they can be bloated with excess stuff. Good web development frameworks: All these benefits save you time and improve the quality of your deliverables. There are many types of web development frameworks you can adopt. 2. There’s no reason to reinvent the wheel. 3.

Google Unobtainium In engineering, fiction, and thought experiments, unobtainium is any fictional, extremely rare, costly, or impossible material, or (less commonly) device needed to fulfill a given design for a given application. The properties of any particular unobtainium depend on the intended use. For example, a pulley made of unobtainium might be massless and frictionless; however, if used in a nuclear rocket, unobtainium would be light, strong at high temperatures, and resistant to radiation damage. The word unobtainium is derived from unobtainable + -ium (the suffix for a number of elements). Engineering origin Since the late 1950s,[a][1] aerospace engineers have used the term "unobtainium" when referring to unusual or costly materials, or when theoretically considering a material perfect for their needs in all respects, except that it does not exist. Contemporary popularization There have been repeated attempts to attribute the name to a real material. Science fiction In real life Similar terms Notes

Web Design Trends in 2011 There is a thin line between design and development, and as we move into a new decade, this line is becoming extremely blurry. Is it enough to draw beautiful mock ups in Photoshop? Maybe 5 years ago. How will you stay relevant as a designer in 2011? Take a gander at the top 11 trends for 2011. 1. What a gratifying sigh of relief! Now that’s shown, please understand that Flash and HTML5 are not equal opponents. Perhaps even more exciting is the fact that CSS3 is available to us in a real way this year. 2. Simplicity. Shades of green create this Twitter visualization tool. Red can be jarring if done incorrectly. 3. Smartphones, iPads, netbooks, oh my! Creating a mobile ready website is not simply removing the bells and whistles from your design. With the help of CSS3, primarily media queries, mobile web design has taken a big leap forward (more on this later). It may be tempting to just create a dedicated mobile site, but that may no longer satisfy your audience. 4. 5. 6. 7. 8. 9. 10.

Money laundering Placing 'dirty' money in a service company, where it is layered with legitimate income, and then integrated into the flow of money is a common form of money laundering Money laundering is the process whereby the proceeds of crime are transformed into ostensibly legitimate money or other assets.[1] However in a number of legal and regulatory system the term money laundering has become conflated with other forms of financial crime, and sometimes used more generally to include misuse of the financial system, including terrorism financing, tax evasion and evading of international sanctions. Most anti-money laundering laws openly conflate money laundering (which is concerned with source of funds) with terrorism financing (which is concerned with destination of funds) when regulating the financial system.[2] Money obtained from certain crimes, such as extortion, insider trading, prostitution, drug trafficking, illegal gambling or tax evasion is "dirty". Methods[edit] Enforcement[edit]

How to Make Your Laptop Theft Proof « Power Byte How to Make Your Laptop Theft Proof The dreaded moment you hope never happens—someone has stolen your laptop. You could have private information, pictures, or even private information belonging to the company you work for, all lost forever. It can cause you pain, money, or even a job. There are paid services that will track your laptop, such as Computrace LoJack. In this Power Byte, I'm going to show you how to make sure your computer can be recovered (in most instances) if it is ever lost or stolen. Step 1 Getting the Software We're going to be using the FREE Keylogger made by Smithy. Download Steel Keylogger by Smithy here.Go to the directory that you downloaded Steel to, and extract the archive (right-click > extract here).Put the Steel.exe in a private directory that a thief would not think to look under. Then make a folder inside of that called "steel" and throw steel.exe inside of it. C:\WINDOWS\steel\steel.exe Step 2 Setup and Configuration 1. 2. 3. 4. 5. 6. 7. 8. 9. 10. 11. 12. Easy.

OpenWay Group OpenWay is an international group of companies with over 10 years experience in developing and implementing innovative software solutions for the financial transaction processing and payment card business. Many of the world's leading banks and processing companies are use our WAY4 software. Our clients expect and receive high-speed flexible software. They appreciate our ability to understand their real business needs, implement the best solutions, and provide timely, competent customer support. Our team is always on the lookout for talented professionals to join us as we build client relationships, develop new products and expand into new markets. We create enterprise systems. Solid customers Challenging tasks Top-notch tools Modern platforms Competent colleagues High levels of responsibility We believe that people work most effectively when their job is interesting and intellectually stimulating We encourage self-starters and good organisers Business analysis and consulting System implementation