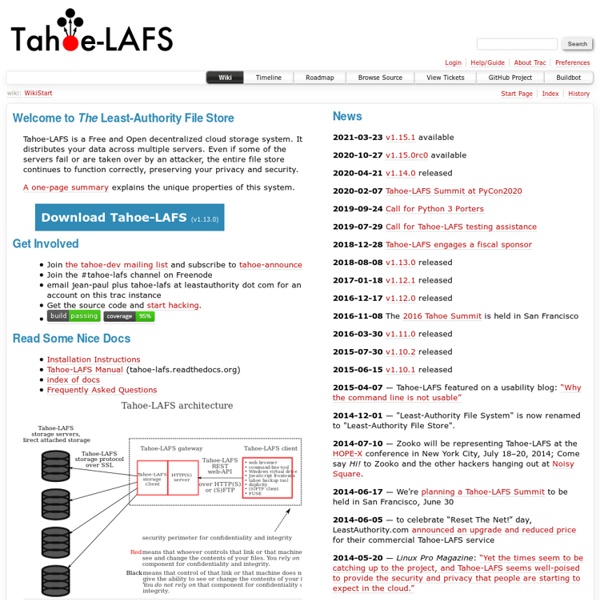 The Tin Hat | Simple Online Privacy Guides and Tutorials MediaGoblin:: GNU MediaGoblin Clustered Filesystem with DRBD and OCFS2 on CentOS 5.5 - Tutorials / Howtos - Sysconfig's Wiki Months ago I've published Clustered Filesystem with DRBD and GFS2 on CentOS 5.4 in this wiki. Now I would like to give another option – OCFS2, which is a clustered filesystem developed by Oracle. OCFS initially was focused on use with Oracle's databases, but with OFCS2 it's a general-pupose cluster filesystem. It's available as open source, and Oracle does a quite good job publishing packages and modules for each and every kernel version (so you don't need to re-compile it over and over again when you update your kernel). You will notice that this howto is very similar to the GFS2 howto mentioned earlier. For this short tutorial, I assume that you have set up identical unused disk partitions on both nodes (sdf in this tutorial) ideally, the two nodes are connected via a distinct network link, and IP addresses have been assigned (I'm using 10.10.10.1 and 10.10.10.2 here) you are running CentOS 5.x on both nodes Unless stated otherwise, please do everything on both nodes! , for example:

Seafile JStylo-Anonymouth - PSAL From PSAL The JStylo and Anonymouth integrated open-source project (JSAN) resides on GitHub. What is JSAN? JSAN is a writing style analysis and anonymization framework. It consists of two parts: JStylo - authorship attribution framework Anonymouth - authorship evasion (anonymization) framework JStylo is used as an underlying feature extraction and authorship attribution engine for Anonymouth, which uses the extracted stylometric features and classification results obtained through JStylo and suggests users changes to anonymize their writing style. Details about JSAN: Use Fewer Instances of the Letter "i": Toward Writing Style Anonymization. Tutorial JSAN tutorial: Presented at 28c3 video Download Downloads: If you use JStylo and/or Anonymouth in your research, please cite: Andrew McDonald, Sadia Afroz, Aylin Caliskan, Ariel Stolerman and Rachel Greenstadt. If you use the corpus in your research, please cite: Michael Brennan and Rachel Greenstadt. Developers

Mirror: The Coming War: ARM versus x86 » Van's Hardware Journal Note: This report was originally published at Bright Side of News* on April 8, 2010. After their server crashed, BSN* has not yet been able to recover the article after several weeks. We are reposting the report here to serve as a mirror of the original article. There are likely to be minor editing differences with the BSN* article. Note 2: Only a month or two after it was published, a detailed report that I wrote was wiped out during a BrightSideOfNews* hard drive crash. It took a little while and cost BSN* a lot of money to recover the data on the hard drive, but that report is now back up and can be read here. I’m currently working on a followup to that bit of analysis that will include even more hardware than the initial report. The computing landscape is changing rapidly and the war between x86 and ARM microprocessors is now underway. Introduction In this report we will discuss the emerging competition between ARM and x86 microprocessors. The Coming War: ARM versus x86 We thank C.J.

Avoiding SPOF -- Clustered, replicated Storage with GlusterFS - Tutorials / Howtos - Sysconfig's Wiki In an environment where high availability is crucial, you won't be able to work without cross-machine replication in the long run. While normal RAIDs, backups, and networked file systems are reasonable ways to protect yourself from data loss and allow to access the same data from multiple hosts, they still leave you with a single point of failure, the storage itself. There are plenty of rather expensive solutions out there, which come with two machines and multiple NICs in one box, accessing the same RAID array (for example NetApp®). GlusterFS can help here. In this mini tutorial, I'd like to describe how to create a replicated clustered storage with two machines. This short tutorial is based on CentOS 5.4 x64, but the GlusterFS team also provides binaries for other RedHat based systems and Debian (including derivates), as well as the source code. So let's go... Obtaining and Installing the Binaries All relevant binaries can be found here: