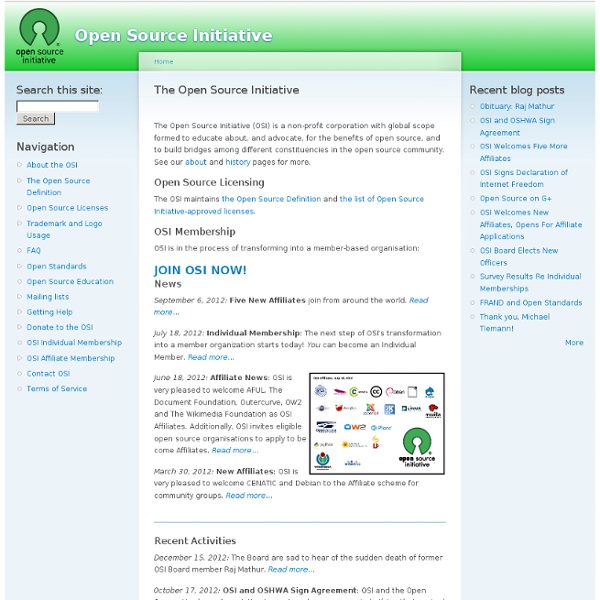 Open source software is software that can be freely used, changed, and shared (in modified or unmodified form) by anyone. Open source software is made by many people, and distributed under licenses that comply with the Open Source Definition. The Open Source Initiative (OSI) is a global non-profit that supports and promotes the open source movement. Among other things, we maintain the Open Source Definition, and a list of licenses that comply with that definition. See our about and history pages for more. OSI Membership

Probably the Best Free Security List in the World Security List Index Select a Security Category: All Items Is Social Media Driving the Economy? - Richard Florida - Technology Social media is redefining the landscape of everything we do from the way we connect to family and friends, how brands and celebrities capture attention, to the way business and journalism function. Hundreds of millions of people across the world use social networks like Facebook, Twitter, and LinkedIn. If any technology promised to shatter the constraint of geography, overcome distance, and flatten the world, social media would be it. But a quick look at the map below, from the NetProspex 2010 Social Business Report, shows this is not the case at all, certainly not for the United States.

Sugerindo um site à Open Directory Project The Open Directory Project is a web directory of Internet resources. A web directory is something akin to a huge reference library. The directory is hierarchically arranged by subject - from broad to specific. The ODP is maintained by community editors who evaluate sites for inclusion in the directory. They are our experts, and all submissions are subject to editor evaluation. Category: Networking Tools - Software reviews, downloads, news, free trials, freeware and full commercial software - Downloadcrew Auslogics Internet Optimizer is an unusually comprehensive internet connection tweaking tool. If you're baffled by networking jargon then there's no need to delve too deeply, though. Just launch the program, choose your internet connection speed, click Analyze and Internet Optimizer will recommend improvements to your system settings.

Celebrities In Social Media: What Online Marketing Means For Hollywood Column: Social media has had a tremendous impact on movie and television marketing, increasing awareness and visibility for a TV show or movie across the globe in a click — a lot clicks — of a button. Some of the best social media teams right now on TV are the two Jimmys — late-night talk hosts Jimmy Fallon and Jimmy Kimmel. These two are in a constant battle for viewers and they really go at each other on social media. Their social engagement across platforms and their understanding of social heralds a new generation of savvy Hollywood stars backed by sophisticated online marketing teams that understand how to push past traditional media to build a tremendous fan base.

Digital Inkwell Well, I should probably rephrase that. Search engine optimizers that are worth their price will have already known about the Penguin 2.0 update and will have implemented strategies to bolster their sites’ PageRank. If... The Best Portable Apps A portable app is a “lite” version of a software, which can be run without being installed on the host computer, and which doesn’t modify the computer’s configuration information. In other words, you can run it, use it, and no-one will ever know you were there. 5 Websites For Every Portable Application On The Web 5 Websites For Every Portable Application On The Web You already know that some applications offer portable or "soft" installations, but don't you wish there was some place on the Internet where you could find any portable application? Read More Apart from being more flexible and secure when working on public computers, another good use for portable apps is to keep your number of installed apps to an absolute minimum.

Top 50 Open Source Companies: Where Are They Now? glasses When The VAR Guy launched his website in January 2008, our resident blogger kept a super close eye on open source channel partner programs. At one point, The VAR Guy published the Open Source 50 -- tracking how the top open source companies were working with VARs and IT service providers. Programmatically Assign Menus To Theme Locations In WordPress In this tutorial we are going to look at how we can programmatically set a menu to a menu location. In WordPress you assign a menu to a location by going to the menu page in the admin area and click on manage locations this will take you to the page /wp-admin/nav-menus.php?action=locations. From here you will see a list of all the locations assigned to your theme with a dropdown where you can choose what menu you want to assign to the location.

Best Free Online File Sharing Sites - Document Sharing Sites File Sharing is a process of sharing/distributing or offering/providing access to digital information like multimedia content audio files, video files, documents, infographics images files, and any computer programs, and e-books and images. Types of file sharing - File synchronization and sharing services | peer to peer file sharing :- Most Popular Photo Sharing SitesMost Popular Video Sharing Sites Peer-to-Peer file sharing - million of users use P2P file sharing technique. Social Networks - Statistics & Facts One of the defining phenomena of the present times reshaping the world as we know it, is the worldwide accessibility to the internet. The lovechild of the World Wide Web is social media, which comes in many forms, including blogs, forums, business networks, photo-sharing platforms, social gaming, microblogs, chat apps, and last but not least social networks. The power of social networking is such that, the number of worldwide users is expected to reach some 2.5 billion by 2018, around a third of Earth’s entire population. An estimated half a billion of these users is expected to be from China alone and approximately a quarter of a million from India. The region with the highest penetration rate of social networks is North America, where around 60 percent of the population has at least one social account. As of 2015, over 70 percent of the United States population had a social networking profile.