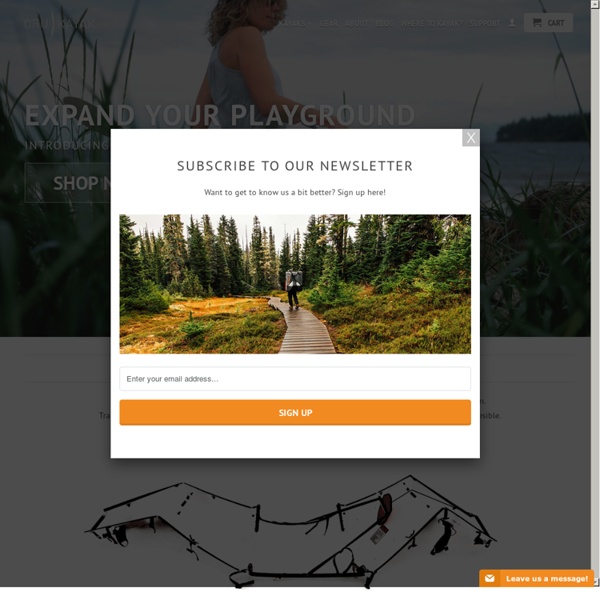 Stash it in a trunk. Check it on a plane. Stow it on a sailboat. Hike it in to remote waters. No garage, SUV or roof racks necessary. The Oru Kayak makes boating simple, easy, and accessible— so you can spend more time on the water.

Sustainable Design Innovation, Eco Architecture, Green Building The Schwimmhaus by German architects Confused-Direction is a green hausboot (oops, house boat) designed to float around or just stay put on the shore. Its modern pre-fab aesthetic sets it aside from most maritime-y houseboats, and a green roof adds freshness and sustainable cred. Still under construction, Schwimmhaus is being built from wood salvaged from an old farm house in addition to other sustainable building materials. Moves ★★★ Google Play selects Accupedo pedometer as 2014 Best 30 Apps at Google Play Store in Japan and Korea. [Dec. 2014]"Accupedo Pedometer Widget made good walking buddies in our last tests." [Washington Post, 10/1/12] "Among cellphone apps the Accupedo pedometer widget for Android phones had the top spot." [LA Times, 12/28/11]

‘quattro Festkogl Alm’ by Designliga (DE) ‘quattro Festkogl Alm’ by Designliga Munich-based creative agency Designliga transformed Audi’s legendary quattro drive system into a memorable visitor experience at Obergurgl-Hochgurgl, Austria’s ‘diamond of the Alps’ ski resort. The ‘quattro Festkogl Alm’ opened as a partnership between AUDI AG and Obergurgl-Hochgurgl Ski Lift Company (Liftgesellschaft Obergurgl-Hochgurgl). Says Designliga, “The realization of this architectural metamorphosis begins with a visual impetus arising from the geometrical form of the Audi rings on the parapet and extending throughout the terrace to reach its culmination on the facade. This is clad in faceted matte-finish anodized aluminium, gradually shaded by the design’s featured shade of red from the parapet to the facade wall. The glowing colour creates an eye-catching splash against the snow, clearly visible from long distances.”

15 of the World’s Most Expensive Foods If you ever find yourself in a Brewster’s Millions situation and have to burn through a fortune in a hurry, then all you need are this article, a few plane tickets and an empty stomach. (It never hurts to plan for the unexpected.) So just in case, here are 15 meals that can help you wipe out your bank account in no time. 1, 2 & 3. The Most Expensive Burgers Where You Can Find It: Serendipity 3, New York BA Final Collections, Fashion, Fashion Show, Graduates If you see Yuki Hagino’s BA final collection, it’s pretty clear why she’s been receiving praise across the board. The London Evening Standard called her designs “heavenly”, whilst Elle UK say that she “provided one of the standout pieces of the show”. The Business of Fashion cherry picked her as one of the top six CSM designers to watch out for – and for good reason!

This $9 Cardboard Bike Can Support Riders Up To 485lbs Izhar Gafni has designed award winning industrial machines for peeling pomegranates and sewing shoes. He’s also a bike enthusiast who’s designed a lot of carbon fiber rigs. But one day, he’d heard about someone who’d built a cardboard canoe. The idea drilled its way into his consciousness, and ultimately, led him to create a cardboard bike called the Alfa. The Alfa weighs 20lbs, yet supports riders up to 24 times its weight.