Space law. Space debris. Radiation. Outer Space Treaty. The Outer Space Treaty, formally the Treaty on Principles Governing the Activities of States in the Exploration and Use of Outer Space, including the Moon and Other Celestial Bodies, is a treaty that forms the basis of international space law. 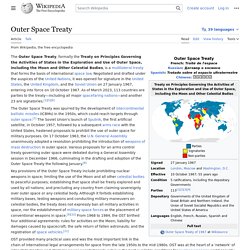 The treaty was opened for signature in the United States, the United Kingdom, and the Soviet Union on 27 January 1967, and entered into force on 10 October 1967. As of September 2015, 104 countries are parties to the treaty, while another 26 have signed the treaty but have not completed ratification.[1] In addition, the Republic of China (Taiwan), which is currently only recognized by 21 UN member states, ratified the treaty prior to the United Nations General Assembly's vote to transfer China's seat to the People's Republic of China (PRC) in 1971.[2] Key points[edit] Space law. All Aboard the Centrifuge Part 3: The PHOENIX Centrifuge « Transmissions Tran... Advanced Life Support. The Bioengineering Branch in the Life Sciences Division at NASA Ames is developing advanced life support (ALS) technologies for use in the regenerative life support systems required for future human missions. 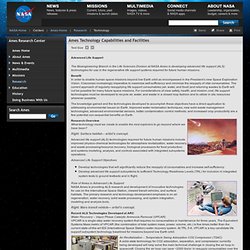 Benefit In order to enable human space missions beyond low Earth orbit as encompassed in the President’s new Space Exploration Vision, it becomes increasingly imperative to maximize self-sufficiency and minimize the resupply of vital consumables. The current approach of regularly resupplying life support consumables (air, water, and food) and returning wastes to Earth will not be possible for many future space missions. For considerations of crew safety, health, and mission cost, life support technologies must be developed to recycle air, water, and waste in a closed loop fashion and to utilize in situ resources wherever possible.

The knowledge gained and the technologies developed to accomplish these objectives have a direct application to addressing environmental issues on Earth. List of spaceflight-related accidents and incidents. "Death in space" redirects here. 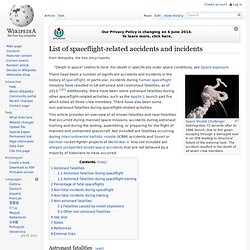 For death in specifically outer space conditions, see Space exposure. Space Shuttle Challenger disintegrates 73 seconds after its 1986 launch, due to hot gases escaping through a damaged seal in an SRB leading to structural failure of the external tank. The accident resulted in the death of all seven crew members. There have been a number of significant accidents and incidents in the history of spaceflight. In particular, incidents during human spaceflight missions have resulted in 18 astronaut and cosmonaut fatalities, as of 2013. This article provides an overview of all known fatalities and near-fatalities that occurred during manned space missions, accidents during astronaut training and during the testing, assembling, or preparing for the flight of manned and unmanned spacecraft. 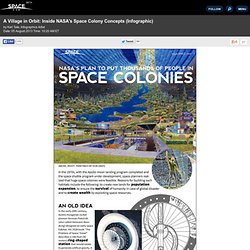 Reasons for building such habitats include the following: to create new lands for population expansion, to ensure the survival of humanity in case of global disaster and to create wealth by exploiting space resources. In the early 20th century, Austro-Hungarian rocket pioneer Herman Potočnik (also called Hermann Noordung) designed an early space habitat. His 1928 book "The Problem of Space Travel" describes a 100-foot (30 meters) ring-shaped station that would rotate to generate artificial gravity. A large parabolic mirror would focus sunlight on water pipes to heat them and generate steam power. Space Colony Concepts: NASA's 1970s Vision for Giant Space Stations (Gallery) In a 1974 "Physics Today" article, Gerard K.

Sci-Fi film 'Elysium' Paints Bleak Future for Earth & Space Colony | Video In 1929, J.D. Space Safety Magazine. Future Collision Andromeda. The hypernova of Eta Carinae is affecting our region of the galaxy Eta Carinae is among the largest, most volatile stars in our galaxy. 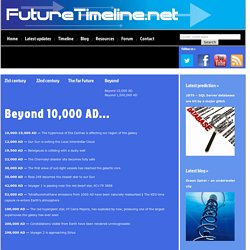 Its temperature is so high that it is unable to hold onto its own gas, with constant streams being ejected from the surface. It first came to attention in 1843 when it flared to magnitude -0.8, becoming the second brightest star in the night sky. It subsequently died down, before brightening again in the late 1990s. This fluctuation continues – with periodic flaring and dimming – until one day the inevitable happens. For a brief period, this colossal explosion outshines the entire galaxy. Of much greater concern, however, are the lethal jets of gamma radiation released by the dying star.

Credit: NASA/GSFC/Dana Berry Our Sun is exiting the Local Interstellar Cloud By 12,000 AD, our Sun has exited the Local Interstellar Cloud and is heading towards the neighbouring G-Cloud, which contains the stars Alpha Centauri, Proxima Centauri and Altair Click to enlarge. Space law. Space Future - Space Law. Another interesting idea is the proposal to introduce a law of "Space Salvage". 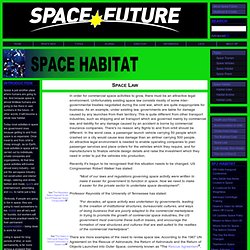 At sea the long-standing law of salvage allows the person who takes control of an abandoned vessel to claim ownership. One of the growing problems in Earth orbit is the amount of "space debris" - abandoned satellites, rocket stages and other pieces abandoned by the governments which launched them. By introducing a law of salvage there would be a strong incentive for businesses to collect together useful objects. Because of the high cost of launch, any mass in orbit is valuable. Even at a launch cost as low as $100/kg, scrap metal would be worth at least $100,000/ton in low orbit! Wine in space.