Alien earths: why life on other worlds would be far weirder than us. Last month, the American Astronomical Society's 223rd meeting featured the announcement of a few breakthroughs: Using the Kepler space observatory, researchers had discovered a planet roughly the mass of Earth orbiting a star beyond our solar system, and with the Hubble telescope they had provided the first detailed look at the weather of a "super Earth" — a planet larger than ours but smaller than Neptune — in our galactic neighborhood. 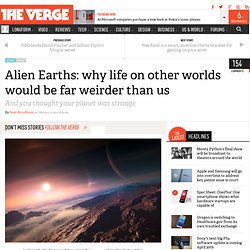 Astronomers found that GJ 1214b, like much of the Earth on any given day, is cloudy. These similarities to Earth are tantalizing. But despite them, these planets' respective solar systems look nothing like our own. Rather than circling a big, hot, yellow sun like ours, they spin around small, cool, red stars called red dwarfs. Kind of like Krypton. "The first planet on which we'll be able to discover signs of life is most likely going to be orbiting a red dwarf," says Courtney Dressing, an astronomy graduate student at Harvard. Russia funds a proposal to land on Jupiter's moon Ganymede. In the waning days of 2013, the Russian government allocated 50 million rubles ($1.52 million) for the development of a technical proposal to land a probe on the surface of the Jovian moon Ganymede. 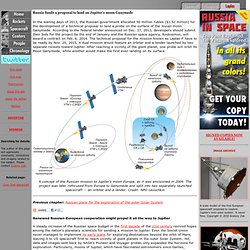 According to the federal tender announced on Dec. 27, 2013, developers should submit their bids for the project by the end of January and the Russian space agency, Roskosmos, will award a contract on Feb. 6, 2014. The technical proposal for the mission known as Laplas-P have to be ready by Nov. 25, 2015. A dual mission would feature an orbiter and a lander launched by two separate rockets toward Jupiter. After reaching a vicinity of the giant planet, one probe will orbit its Moon Ganymede, while another would make the first ever landing on its surface. A concept of the Russian mission to Jupiter's moon Europa, as it was envisioned in 2009. Previous chapter: Russian plans for the exploration of the outer Solar System Renewed Russian-European cooperation might propel it all the way to Jupiter.

Technology - KickSat: The smallest spacecraft in orbit. A swarm of 100 tiny satellites is poised to launch into orbit, owned by schoolchildren and space enthusiasts. 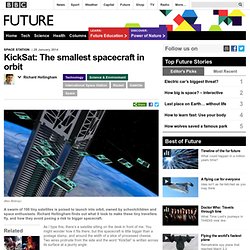 Richard Hollingham finds out what it took to make these tiny travellers fly, and how they avoid posing a risk to bigger spacecraft. As I type this, there’s a satellite sitting on the desk in front of me. You might wonder how it fits there, but this spacecraft is little bigger than a postage stamp, and around the width of a slice of processed cheese. Two wires protrude from the side and the word “KickSat” is written across its surface at a jaunty angle. It may not look much like a typical spacecraft, but next month, 100 miniature satellites like this one will be blasted into orbit. The KickSat project is run by Zac Manchester, a graduate student at Cornell University in New York. There has been tremendous interest in this ambitious mission. Getting to this point, however, has proven far more difficult for Manchester than ever expected. Saylor Foundation Collaborate to Offer New Free Space Systems Engineering Course. 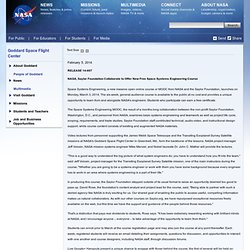 The six-week, general-audience course is available to the public at no cost and provides a unique opportunity to learn from and alongside NASA's engineers. Students who participate can earn a free certificate. The Space Systems Engineering MOOC, the result of a months-long collaboration between the non-profit Saylor Foundation, Washington, D.C., and personnel from NASA, examines basic systems engineering and teamwork as well as project life cycle, scoping, requirements, and trade studies. Saylor Foundation staff contributed technical, audio-video, and instructional design support, while course content consists of existing and augmented NASA materials.

In producing this course, the Saylor Foundation stepped outside of its usual format to seize an opportunity deemed too good to pass up.