The Underview on 2001: How Was It Done? In flat contradiction of what I have written elsewhere (that I rather like the mystery of not always knowing how clever effects are achieved), requests for explanations of some of the wholly convincing yet baffling scenes from "2001: A Space Odyssey" finally compel me to reveal a few secrets (with due respect to all those already in the know, who probably knew long before I did). 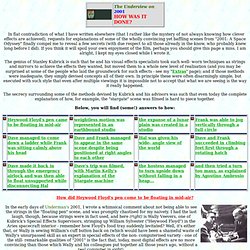 If you think it will spoil your own enjoyment of the film, perhaps you should give this page a miss. I am alright, I kept my eyes closed while I wrote it. The genius of Stanley Kubrick is such that he and his visual effects specialists took such well- worn techniques as strings and mirrors to achieve the effects they wanted, but moved them to a whole new level of realisation (and you may be surprised at some of the people who laid the groundwork for such effects - see my "Extras" page); and if those methods were inadequate, they simply devised concepts all of their own. 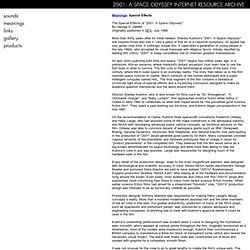 DeMet Originallly published in DFX, July 1999 More than thirty years after its initial release, Stanley Kubrick's "2001: A Space Odyssey" still inspires those who see it. Like a piece of fine art or a classical symphony, its appeal has only grown over time. A strikingly unique film, it captivated a generation of young people in the late 1960s, who accepted its visual message with religious fervor. An epic story spanning both time and space, "2001" begins four million years ago, in a prehistoric African savanna, where mankind's distant ancestors must learn how to use the first tools in order to survive. Director Stanley Kubrick, who is also known for films such as "Dr. Every detail of the production design, down to the most insignificant element, was designed with technological and scientific accuracy in mind.

It was not unusual for the crew to go to great lengths to create the film's unique sets. 2001: A Space Odyssey. AS A FILM about progress--physical, social, and technological--Stanley Kubrick's huge and provocative 2001: A Space Odyssey remains essentially linear until its extraordinary ending. 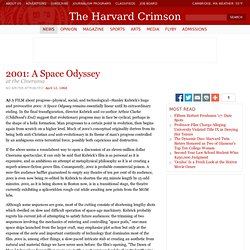 In the final transfiguration, director Kubrick and co-author Arthur Clarke (Childhood's End) suggest that evolutionary progress may in face be cyclical, perhaps in the shape of a helix formation. Man progresses to a certain point in evolution, then begins again from scratch on a higher level. Much of 2001's conceptual originality derives from its being both anti-Christian and anti-evolutionary in its theme of man's progress controlled by an ambiguous extra-terrestrial force, possibly both capricious and destructive. Could You Survive for 14 Seconds in the Vacuum of Space Like in Kubrick’s ’2001′? Let’s look ahead to the future. 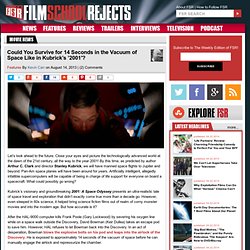 Close your eyes and picture the technologically advanced world at the dawn of the 21st century, all the way to the year 2001! By this time, as predicted by author Arthur C. Clark and director Stanley Kubrick, we will have manned space flights to Jupiter and beyond. Pan-Am space planes will have been around for years. Artificially intelligent, allegedly infallible supercomputers will be capable of being in charge of life support for everyone on board a spacecraft. Kubrick’s visionary and groundbreaking 2001: A Space Odyssey presents an ultra-realistic tale of space travel and exploration that didn’t exactly come true more than a decade go. After the HAL-9000 computer kills Frank Poole (Gary Lockwood) by severing his oxygen line while on a space walk outside the Discovery, David Bowman (Keir Dullea) takes an escape pod to save him. The Answer: Yes, but it would suck According to William P. But what about those explosive bolts? Solve More Movie Mysteries. 2001: A Space Odyssey Internet Resource Archive.

2001: A Space Odyssey (film) Produced and distributed by the U.S. studio Metro-Goldwyn-Mayer, the film was made almost entirely in England, using both the studio facilities of MGM's subsidiary "MGM British" (among the last movies to be shot there before its closure in 1970)[4] and those of Shepperton Studios, mostly because of the availability of much larger sound stages than in the United States. 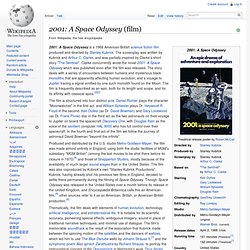 The film was also coproduced by Kubrick's own "Stanley Kubrick Productions". Kubrick, having already shot his previous two films in England, decided to settle there permanently during the filming of Space Odyssey. Though Space Odyssey was released in the United States over a month before its release in the United Kingdom, and Encyclopædia Britannica calls this an American film,[5] other sources refer to it as an American, British, or American-British production.[6] The film consists of four major sections, all of which, except the second, are introduced by superimposed titles. Kubrick 2001: The space odyssey explained.