26 Jaw-Dropping Images of Our Planet by NASA. What A Year In Space Does To The Human Body. International Space Station (ISS) crew member Scott Kelly of the U.S. shows a victory sign after landing near the town of Dzhezkazgan, Kazakhstan, on Wednesday, March 2, 2016. 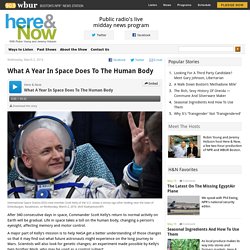 (Krill Kudryavtsev/AP) After 340 consecutive days in space, Commander Scott Kelly’s return to normal activity on Earth will be gradual. Life in space takes a toll on the human body, changing a person’s eyesight, affecting memory and motor control. Watch Full Episodes Online of A Year in Space on PBS. Use one of the services below to sign in to PBS: You've just tried to add this video to your Watchlist so you can watch it later. 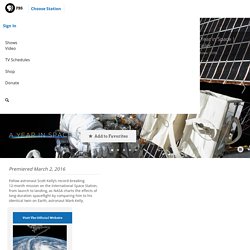 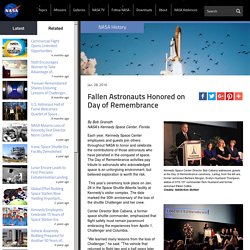 The paying passenger, Abram Pheil, left, flew from St. Petersburg to Tampa, Florida, in 23 minutes. Credits: State Archives of Florida The Douglas Aircraft Co. DC-3 is often viewed as the aircraft that revolutionized air transport for passengers and cargo. Credits: U.S. Prior to 1940, passenger aircraft only flew as high as 10,000 feet, due to the reduced levels of oxygen at higher altitudes. 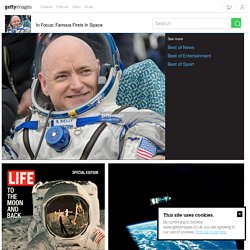 News Photo. Watching @StationCDRKelly undock tonight made me nostalgic. Here is a #timelapse I took in 2014. So beautiful. Large lightning strike on Earth lights up or solar panels. LIVE - LIFTOFF 5 of the #SoyuzTMA18M launch to the #ISS carrying Aimbetov @Volkov_ISS & @Astro_Andreas. Orange you glad the #HTV5 cargo ship arrived? @astro_kjell corrals new supply of fresh fruit. 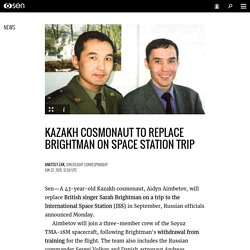 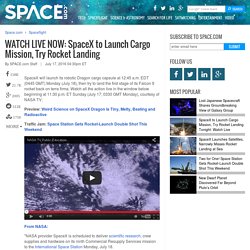 EDT (0445 GMT) Monday (July 18), then try to land the first stage of its Falcon 9 rocket back on terra firma. Watch all the action live in the window below beginning at 11:30 p.m. ET Sunday (July 17; 0330 GMT Monday), courtesy of NASA TV: From NASA: "NASA provider SpaceX is scheduled to deliver scientific research, crew supplies and hardware on its ninth Commercial Resupply Services mission to the International Space Station Monday, July 18. The SpaceX Dragon cargo spacecraft is scheduled for liftoff on the company's Falcon 9 rocket at 12:45 a.m. New Virgin Galactic SpaceShipTwo to Debut. Sixteen months after a fatal test flight destroyed its first spaceship, Virgin Galactic on Friday is unveiling a second vehicle intended to fly paying passengers into suborbital space. 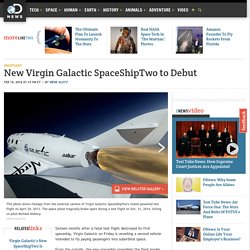 From the outside, the new spaceship resembles the fleet leader, which broke apart over Mojave, California, on Oct. 31, 2014, during its fourth powered test flight. Co-pilot Michael Alsbury, who worked for SpaceShipTwo designer and manufacturer Scaled Composites, was killed in the accident. Pilot Pete Siebold managed to parachute to safety. Weather. In early spring in the Northern Hemisphere, what might appear as city lights on the horizon is actually a hard-to-spot astronomical phenomenon. 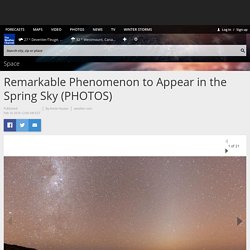 This glow is known as zodiacal light, and we're nearing the season for it. Zodiacal light (named for the Zodiac, or pathway of the sun across the sky) appears as an unusual triangle or pyramid, sparkling just above the horizon shortly after sunset. ORBCOMM-2 Full Launch Webcast. LRO Images. LRO Videos. Twitter. Photography by ©Bernal Saborio. I love this picture! London from above □□ #london. After further data review, stage landed softly but leg 3 didn't lockout. Was within 1.3 meters of droneship center. Pluto probe sends back photos of possible ice volcano. EPIC video of sunlit ‘dark side’ of moon crossing over Earth revealed by NASA. NASA has released spectacular footage of the “dark side” of the moon – fully illuminated – as the Earth’s natural satellite was moving across the sunlit side of our planet. 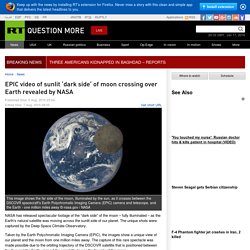 The unique shots were captured by the Deep Space Climate Observatory. Taken by the Earth Polychromatic Imaging Camera (EPIC), the images show a unique view of our planet and the moon from one million miles away. The capture of this rare spectacle was made possible due to the orbiting trajectory of the DSCOVR satellite that is positioned between the Sun and the Earth, giving it the capability to see the far side of the moon. “It is surprising how much brighter Earth is than the moon,” said Adam Szabo, DSCOVR project scientist at NASA’s Goddard Space Flight Center in Greenbelt, Maryland. SpaceX plan vs reality: Satellite launched, ocean platform landing botched. The private spaceflight company SpaceX has launched a reusable rocket that is supposed to deliver a NASA ocean-monitoring satellite into low-Earth orbit. 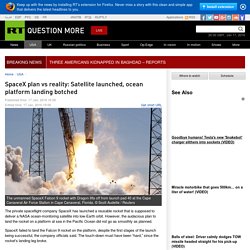 However, the audacious plan to land the rocket on a platform at sea in the Pacific Ocean did not go as smoothly as planned. SpaceX failed to land the Falcon 9 rocket on the platform, despite the first stages of the launch being successful, the company officials said. The touch-down must have been “hard,” since the rocket’s landing leg broke. The Space X Flacon 9 rocket took off with the Jason-3 satellite from California's Vandenberg Air Force Base at 10:42 a.m. Twitter. Twitter. Scott Kelly (@StationCDRKelly) Possible ice volcano spotted on the surface of Pluto from @NASANewHorizons composite image. 1 HOUR of AMAZING HQ SPACE VIDEO - The BEST of Discovery Space. The View from Space - Countries and Coastlines. HOW IT WORKS: The International Space Station (1080p, 60fps) Breathtaking New Images of the MOON. South Korea's first astronaut discusses her historic mission.

A look back at #science on the International Space Station in 2015. Cassini Top 10 Images and Science Results of 2015. Study: Lunar Colonization Could be Surprisingly Cheap — But There’s a Catch. NASA could dramatically cut the cost of returning humans to the moon if it is willing to mine and sell the moon's natural resources, according to a study commissioned by the agency. The Space Frontier Foundation-penned study encourages NASA to mine the moon's hydrogen for the "commercial production of cryogenic propellant". The report estimates that there are 10 billion cubic meters of water on the moon's poles -- equivalent to Utah's Great Salt Lake.

The mining operation could potentially reduce the cost of sending humans to the moon by 90%. First, however, NASA must send robotic scouts to confirm that the polar water is even harvestable. NASA has a identified one major way to save money while establishing a colony on the moon >> NASA Reaches New Heights in 2015. Using color to look at Pluto can help make new discoveries, like that of water ice. See how. In 2015, the @Space_Station saw 7 spacewalks, 8 cargo ships & 450 experiments. Catch up on #SpaceToGround.

#Today in 1968, the Apollo 8 astronauts became the first humans to orbit the Moon. Seven Billion Dreams. "enorme prominencia Lift-Off" de Paolo Porcellana, Italia. Did you get a new smartphone or device today? Download our free e-Books & enjoy the read. Space-Age Santa Claus: Montage of pics by @CassiniSaturn shows the north pole on #Enceladus. Burning Fireball Lights up Vegas Sky. A Bright Light Just Streaked Across The Sky Over California And Nevada. @247razz No ring, but cool effect. When @NASA explores deep space, they get power from Pu-238. @ORNL makes fuel for the future. The Falcon 9 first stage landing is confirmed. Second stage continuing nominally. All 11 @ORBCOMM_Inc satellites have been deployed in nominal orbits. Long exposure of launch, re-entry, and landing burns.

Success! SpaceX lands rocket after takeoff - Dec. 21, 2015. Traditionally, rockets are disposed of after they detach from the spacecraft. The ability to recycle them marks a big step toward making space travel cheaper. After three failed attempts at a rocket landing, it marks a major victory for SpaceX and CEO Elon Musk. It's also the company's first flight since June, when its unmanned spacecraft exploded shortly after liftoff and destroyed two tons of NASA cargo. Weather and other delays kept its comeback flight grounded this weekend, but SpaceX launched from Florida's Cape Canaveral Air Force Station without a hitch on Monday evening. The primary mission was to put 11 small satellites into low orbit for Orbcomm's (ORBC) new satellite network. 11 satellites deployed to target orbit and Falcon has landed back at Cape Canaveral.

Falcon 9 First Stage Landing. The SpaceX rocket went up. For the first time, it came down gently for a successful landing. Another view of Falcon 9 first stage approaching Landing Zone 1. Falcon 9 standing on LZ-1 at Cape Canaveral. Background on Tonight's Launch. A lot about how things work in space is counter-intuitive, as all of our intuition is gained from daily experiences where the air is thick, gravity doesn't seem to change and movement is relatively slow. We do see lots of movies about space, but, unless you're watching an IMAX documentary, they vary from slightly wrong, like The Martian (good movie!)

, to mostly absurdly wrong, like Red Planet (don't watch this, it will hurt your brain), which also doesn't help intuition. ​ Gravity Never Stops. There and back again. .@CassiniSaturn spacecraft transmits data from final close flyby of Saturn’s moon Enceladus. Watch SpaceX launch and land a rocket, and see how the world reacted. Elon Musk’s SpaceX landed its towering rocket Monday night in a historic engineering feat that may one day reduce the cost of space travel by making spacecraft reusable. The rocket was carrying 11 small satellites for Orbcomm of New Jersey. Lift-off for a new era of UK human spaceflight? Underwater Life Of Poda Island, Thailand. Hubble Views a Lonely Galaxy.