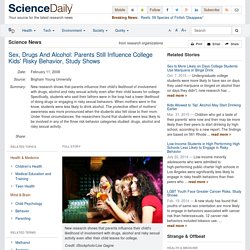 In an upcoming issue of the Journal of Youth and Adolescence, Brigham Young University family scientist Laura Walker’s study found that parents’ knowledge or awareness of what’s going on in their child’s life at college is associated with fewer risky behaviors. Specifically, students who said their fathers were in the loop had a lower likelihood of doing drugs or engaging in risky sexual behaviors. When mothers were in the know, students were less likely to drink alcohol. The protective effect of mothers’ awareness was more pronounced when the students also felt close to their mom. Under those circumstances, the researchers found that students were less likely to be involved in any of the three risk behavior categories studied: drugs, alcohol and risky sexual activity. Delaying adulthood to find identity has bright side. High-Risk Drinking in College Athletes and Nonathletes Across the Academic Year.

College and University Students. The prevalence of alcohol use among college students is a concern for school administrators and parents alike. 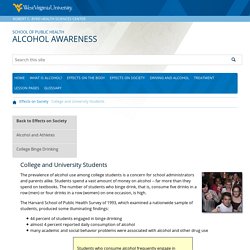 Students spend a vast amount of money on alcohol -- far more than they spend on textbooks. The number of students who binge drink, that is, consume five drinks in a row (men) or four drinks in a row (women) on one occasion, is high. The Harvard School of Public Health Survey of 1993, which examined a nationwide sample of students, produced some illuminating findings: 44 percent of students engaged in binge drinkingalmost 4 percent reported daily consumption of alcoholmany academic and social behavior problems were associated with alcohol and other drug use Students who consume alcohol frequently engage in risk-taking behaviors, including: Alcohol use is a strong predictor in campus sexual assaults, property damage, injury, and poor academic performance. Colleges and universities face a major challenge to prevent such tragedies. Some problems include: Annual report shows increase in liquor violations in University of Hawa‘i at Mānoa - Ka Leo O Hawaii: NEWS. A report released by the campus Department of Public Safety (DPS) showed an increase in liquor law violations last year, but there is no clear reason why. 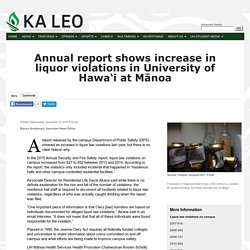 In the 2015 Annual Security and Fire Safety report, liquor law violations on campus increased from 627 to 932 between 2013 and 2014. According to the report, the statistics only included incidents that happened in “residence halls and other campus-controlled residential facilities.” Associate Director for Residential Life David Akana said while there is no definite explanation for the rise and fall of the number of violations, the residence hall staff is required to document all incidents related to liquor law violations, regardless of who was actually caught drinking when the report was filed.

“One important piece of information is that Clery [law] numbers are based on individuals documented for alleged liquor law violations,” Akana said in an email interview. Violations in the dorms Basics. University of Hawai‘i Mānoa Health Promotion office continues raising smoking awareness with “not what you think” campaign - Ka Leo O Hawaii: NEWS. The campus Health Promotion Office continues to raise awareness and educate students on electronic cigarettes (e-cigs) with its latest campaign, “Not What You Think” – a poster campaign launched in October 2015 and funded by the state Department of Health. 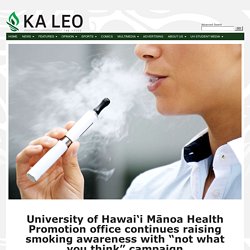 UH Mānoa’s smoke-free campus policy went into effect in August 2015. This year’s changes in Hawai‘i’s tobacco laws led the UH Mānoa smoke-free policy to include e-cigs as well. “When [students] get a little bit of information [about e-cigs], it makes them think twice about it, ask questions about it,” said Lisa Kehl, prevention specialist and counselor for the alcohol and other drug education program at on campus.

Posters from the campaign can be found around campus and residential halls. The four different poster designs present information about e-cigs: Not regulated: electronic cigarettes are not currently regulated by the FDA and devices can leak or even explode. Not just water vapor: these devices form an aerosol, not water vapor.