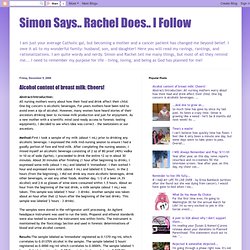 One big concern is alcoholic beverages. For years mothers have been told to avoid even a sip of alcohol. However, many women have heard stories of their ancestors drinking beer to increase milk production and just for enjoyment. As a new mother with a scientific mind (and ready access to forensic testing equipment), I decided to see who's idea was correct - the teetotalers or our ancestors. Method:First I took a sample of my milk (about 1 mL) prior to drinking any alcoholic beverage. The samples were stored in the refrigerator until processing. Results:The sample labeled as 'immediate' registered as 0.1370 mg/mL which correlates to 0.01370% alcohol in the sample. 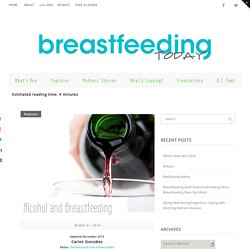 Liqueurs range from 30–40 per cent (sometimes more). Beer contains 4–6 per cent alcohol (sometimes more). Alcohol-free beer can legally contain up to 1 per cent alcohol. Someone with 1 per cent of alcohol in their blood would already be dead. Consequently, even the breast milk of a completely inebriated mother could be bottled and labelled ‘alcohol-free’. To sum up: at worst milk is a very mildly alcoholic drink, and it is almost impossible that drinking alcohol while breastfeeding will harm your baby. I say ‘almost’, because newborns are very sensitive to alcohol, they metabolise it very slowly, and moreover they nurse like mad.

Drinking more than half a litre a day when you weigh a little over three kilos is the equivalent of an adult who weighs 60 kilos drinking ten litres a day. Alcohol consumption is measured in grams per day, but for practical purposes it is usually measured in ‘glasses’. Resources. Formula is worse for babies than alcohol-tinged breastmilk, says ABA - Kidspot. This article first appeared in The Courier-Mail. 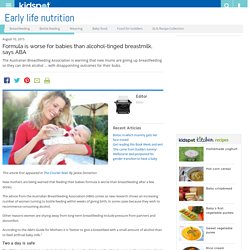 By Jackie Sinnerton New mothers are being warned that feeding their ­babies formula is worse than breastfeeding after a few drinks. The advice from the Australian Breastfeeding Association (ABA) comes as new research shows an increasing number of women turning to bottle feeding within weeks of giving birth, in some cases because they wish to recommence consuming alcohol. Other reasons women are shying away from long-term breastfeeding include pressure from partners and discomfort. According to the ABA’s Guide for Mothers it is “better to give a breastfeed with a small amount of alcohol than to feed artificial baby milk.” Two a day is safe The ABA’s website states two alcoholic drinks a day is safe while breastfeeding. “If a mum follows the ­recommended protocol she can have a drink and enjoy herself.” Midwives give their verdict “I believe one of the leading reasons women drop out is due to work commitments,” she said.

Dr.Jack Newman - The following is from a blog by a mother... Guest Post: Breastfeeding and Alcohol Consumption. FAQ on Alcohol. Women are often warned to not consume alcohol during pregnancy, as ample evidence has shown that it poses a severe and avoidable risk to her unborn baby. 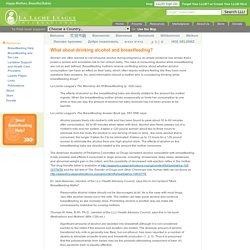 The risks of consuming alcohol while breastfeeding are not as well defined. Breastfeeding mothers receive conflicting advice about whether alcohol consumption can have an effect on their baby, which often leaves mothers feeling like they have more questions than answers. So, what information should a mother who is considering drinking while breastfeeding know?

La Leche League's The Womanly Art Of Breastfeeding (p. 328) says: The effects of alcohol on the breastfeeding baby are directly related to the amount the mother ingests. La Leche League's The Breastfeeding Answer Book (pp. 597-598) says: Alcohol passes freely into mother's milk and has been found to peak about 30 to 60 minutes after consumption, 60 to 90 minutes when taken with food. Dr. Reasonable alcohol intake should not be discouraged at all. Thomas W. Important Considerations. Alcohol.pdf.